At the Audubon Society of Rhode Island's Environmental Education Center, I couldn't help but notice an enormous Common Snapping Turtle (Chelydra serpentina) skull when I was placing a complete Corn Snake shed into a specimen drawer. All I could determine about this specimen is that it's from Auburn, Maine and rivals my prior giant snapper in size. 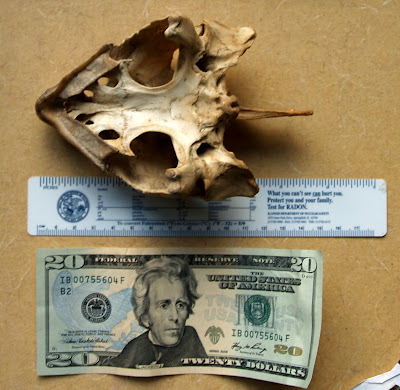 Ventral view of the skull. Using ImageJ, I calculated the distance from the tip of the premaxilla (i.e., the beak) to the end of the supraoccipital to be 14.74 cm or 5.8 inches. The currency - which refused to smoothen out - is there to establish rough scale. 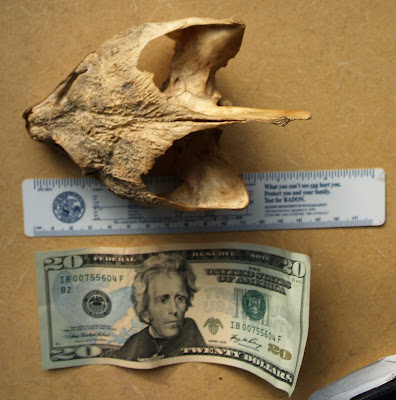 Dorsal view of skull. These measurements slightly exceed the ventral view, probably due to the highly raised supraoccipital. The bill has somehow become even more crinkled. 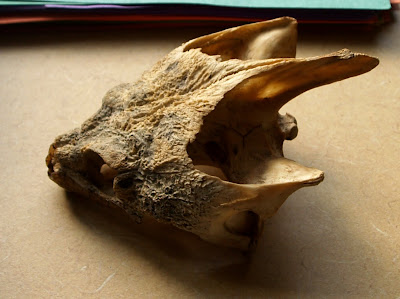 Note the enormous temporal/otic notches and damage to the prefrontal. 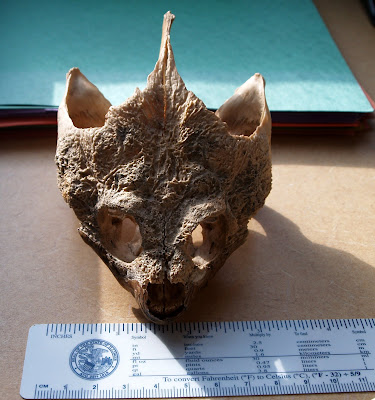 Frontal view. The posterior portion of the head was probably considerably wider in life.
Data from Herrel and O'Reilly (2006) indicates their largest Chelydra had a 11.8 cm (4.65") head corresponding with a carapace length of 38.6 cm (15.6"), giving a head:SCL ratio of 1:3.27. This implies that the Auburn Specimen (head length ~14.7 cm) has an SCL of at least 48 cm (19") - as snapping turtle heads appear to get proportionally smaller with increased SCL. So how does Gamera stack up? 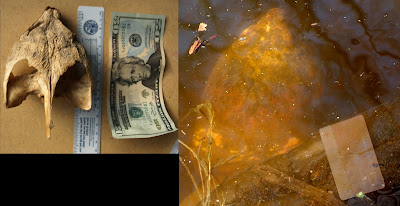 The specimens appear to be nearly identical in size - and somehow, angle.
The official maximum size* of Chelydra serpentina, as given by Ernst and Lovich (2009), is an SCL of 49.4 cm (19.4") (Ernst and Lovich 2009) - a length both of these specimens appear to have approached, or slightly exceeded. Considering just about everybody has a story about giant snappers, this seems to imply that such lengths are not uncommon; the ease in which I found the two very large specimens appears to support this. Ferri (2002) claims the "normal" maximum for Chelydra is 47 cm SCL, but specimens may reach 60 cm (2 feet); while this claim was not substantiated as far as I can tell, it seems plausible.

* One wild specimen with a 47 cm (18.5") SCL weighed 34 kg (75 pounds)... and was known for attacking horses! (Ernst and Lovich 2009) - presumably the specimens I ran across are/were similarly massive and potentially traumatogenic.
More on this subject soon.

Look who is throwing around the big bucks...

No useful comment to make. But I'm glad to see that graduation hasn't put a stop to your zoologizing.

And big snapping turtles are ... I think "Awesome" might not, in this case, be inappropriate!

Thank Fishbase for that one!

When I was a kid I caught a snapper that was one centimeter (carapace length) smaller than the largest ever recorded in Illinois, according to the Illinois Natural History Bulletin. I was 12 at the time and could barely lift it.

I have an alligator snapper today, which I ordered from a turtle farm in Mississippi as a hatchling. Since they butchered turtles for meat at the farm, I asked if they could send me the skull of an adult which they agreed to do. When my package arrived, there was the skull with wadded up newspaper for padding but I couldn't find my little snapper anywhere. I unwadded every piece of newspaper looking for it. Finally, I found the hatchling up inside the eye socket of its adult conspecific. "Mac" is ten years old now and about the size of a dinner plate. I don't feed him too much because I'm not sure what I'm going to do with him when he's huge.

Would you by any chance have a photograph of that near-record?

Your baby alligator snapper story reminds me of this National Geographic Photo. I'm curious as to how a turtle farm would be profitable if, as you demonstrate, even after a decade they're not particularly large. At least they're not commercially harvesting them from the wild, one of the Worst Ideas Ever (which I'll cover at some point).

Cameron: actually I do have a photo of that state near-record sized snapper but it is a snapshot in an old photo album that I would have to scan in order to share online, and I don't currently have access to a scanner. Also, in the photo I am holding it by the tail, which I now know is a bad thing to do but didn't know at the time.

There are, or were a decade ago, several commercial turtle farms in Arkansas & Mississippi, raising both American & alligator snappers for meat. In correspondence with the proprietor of the turtle farm from which I obtained my hatchling, I learned that they fed the turtles slaughterhouse offal & their clientele was primarily cajun restaurants.

Thanks for sharing that Nat Geo photo. My hatchling was actually up inside the eye socket of the adult's skull, from which it wasn't all that easy to extract. The bone of that skull was crumbly and I had to spray it with a clear acrylic in order to keep it from literally crumbling into dust.