There aren't many pictures of very large Common Snapping Turtles (Chelydra serpentina) - let alone with decent angles or objects that can be used for scale - so I feel obliged to share a series of photos taken in Rhode Island's Blackstone River in May, 1986: 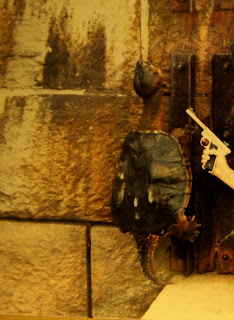 I have no prior experience with gun identification, but this appears to be a Ruger MK II with a 4 in (10 cm) bull barrel; this scale gives realistic measurements of the man in the photograph, who is roughly the same size I am. Thus, the strait carapace length is approximately 16.5 inches (42 cm), which isn't record size (49.4 cm/19.4 inches), but then, the same body of water reportedly holds numerous other individuals which are even larger. The weight was estimated to be around 80 pounds (36 kg). 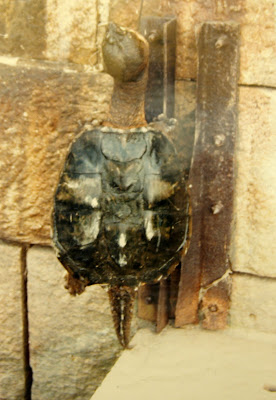 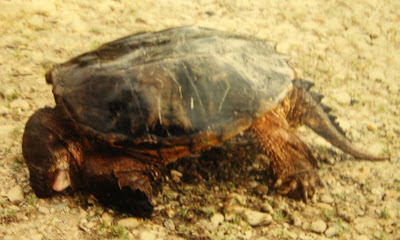 The carapace appears to have three low keels, which seems remarkable for a turtle of this size. Supramarginals are obviously not present, so this cannot be an out of place Alligator Snapping Turtle (Macrochelys temminckii). The head:carapace ratio is difficult to determine, but appears to be larger than 1:3, judging by the last photo. The tail is rather short and slender for a snapping turtle - could this individual be female? The record for that gender is an SCL of only 36.6 cm (14.4 inches) - in which case this individual would be quite remarkable (Ernst and Lovich 2009 - citing Gibbons and Lovich 1990) 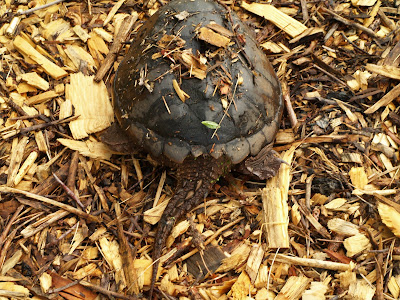 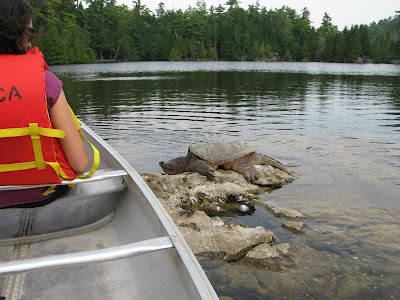 Snapping turtle with ~40 cm (15.7 inch) SCL - note how the tail has a post-carapace 'bulge' and is overall much thicker than that of the Blackstone Specimen. Taken from Flickr user Karim Rezk. Similar photos can be found here and here.
Males snappers have an anal vent past the carapace rim and a pre-anal tail length of over 120% the length of the posterior lobe; females have a vent beneath or slightly under the rim and have a pre-anal tail length under 110% of the lobe (Ernst and Lovich 2009 - illustrated here). Males also have longer and thicker tails, a smaller plastron, and narrower bridge (see Chelydra.org). Unfortunately, most of these traits are not observable in the specimen and I am uncertain if the tail morphology is within the range of variation for males.  Still, it is a remarkable animal, and it certainly isn't every day that a turtle has a shell the size of a human torso.
Since this is such an interesting topic, I will start on a sub-page of this blog that focuses on snappers which are potentially larger than record size. If anyone reading has any stories, I will be highly interested.
Many thanks to the source for the photograph!

I can't speak to this, but I have seen some other ruminations about this.
http://www.youtube.com/watch?v=DlMbnMQuxbg&feature=player_embedded
timeindex 10:15
(timeindex 14:30 is pretty dang cool, too)

Hmm... I'm rather dubious of the "Third Species Hypothesis" - most people are probably only familiar with females, so a very large male could be quite a shock. It certainly was for me!

Something that usually makes me skeptical of eye-witness accounts is that water surface refraction (if I have the phenomenon correct) can make things seem so much larger than they really are. Yes, I want to think their are Hellbenders six feet long. But, I'm not accepting it so easily.

Is there any possibility that this individual could be a hybrid common snapper x alligator snapper?

Probably not. I don't see any diagnostic feature for Macrochelys (supramarginals, massive head with strongly hooked beak, etc.) and it could be possible that the keels are exaggerated from being scraped against concrete. Anecdotal evidence holds that snapping turtles in this size class (and up) aren't uncommon in the general region, so it would be improbable for there to be a whole population of hybrids.

It seems that hybrids are indeed possible (not sure if they're fertile) and Alligator Snappers probably could successfully live in RI...

Hey, I'm a grad student working on Snappers (Chelydra serpentina). The pictured animals are definitely just large Chelydra, no question. The residual keels seem typical to me. I would be dubious of any attempts to sex the animal from the photos shown. I would also be dubious about any claims of size. It is very easy to make animals appear larger in photos using simple perspective tricks (just ask any angler). This blog routinely debunks exaggerated size claims 'supported' by photos. Hope this helps.

Most of the snappers from these photos can easily be sexed. Although none are anywhere near large or record, monster snappers are actually quite common. Having personally captured over 30 individuals 50+ pounds, monsters are still out there