Picture of the Indiscriminate Interval #000006a

I am getting bored of 'Cadborosaurus', so before finishing the series, here is a mysterious object found on the shoreline near Independence Park, Bristol, Rhode Island. This object is very fragile and part of the anterior end has broken off; to make up for this complication, I feel obliged to hint that size is a major clue. 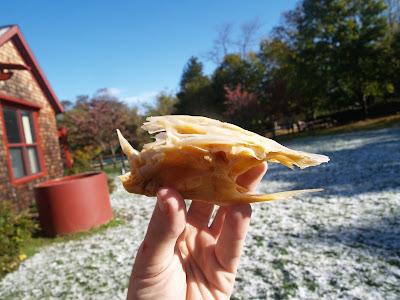 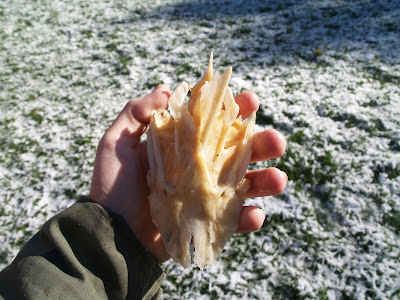 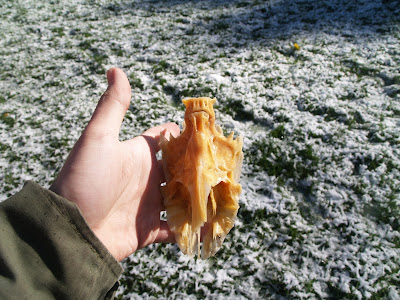 Posted by Cameron McCormick at Sunday, October 30, 2011 13 comments:
Email ThisBlogThis!Share to TwitterShare to FacebookShare to Pinterest

Woodley et al. (2011) didn't just concern itself with poachers, pipefish, and 'Cadborosaurs'; everything vaguely similar to the Hagelund specimen in the region was considered. Just in case.


Tube-snouts appear to swim primarily with their pectoral fins while keeping their bodies stiff (similar to poachers, sans ground effect), which makes sustained undulatory locomotion seem improbable. The largest known specimen was 18.8 cm in total length (Bayer 1980), which is less than half of the Hagelund specimen's reported length and hugely problematic for Tube-snouts as candidates.


The Pacific Black Scabbardfish (Aphanopus arigato) and Pacific Scabbardfish (Lepidopus fitchi) both exceed 40 cm and have strongly forked caudal fins; neither fits the coloration, however. No cutlassfishes have scales, let alone plate-like ones, which can be viewed as a critical problem.


Staude and Lambert suggested that the Hagelund specimen may be a decapod in an editorial responding to LeBlond and Bousfield's description of 'Cadborosaurus' in Amphipacifica... an amphipod publication. In order for this identification to work, the "whiskers" would be head appendages (antennae, mandibles, maxillae), the "head" would be the carapace, the "fuzz" would be thoracic and abdominal appendages (maxillipeds, pereiopods, pleopods), the "plate-like scales" would be segments, and the tail appendages would be uropods. This is certainly thought-provoking, but it would require Hagelund to somehow fail to distinguish a vertebrate from an arthropod. There also aren't any obvious candidates, with the largest (Pandalus platyceros - pictured above) being around half the size of the Hagelund specimen with a radically different coloration and proportions.


The Hagelund specimen is surprisingly similar to pinnipeds, as it is the only group to possess a similar appendage arrangement (in phocids, at least), have true whiskers and fur, and be unambiguously coded as having a "seal-like face". Various pinnipeds also demonstrate long heads, slender bodies, and sorta similar coloration. Describing a pinniped as "eel-like" and "undulatory" is problematic, and the lack of plate-like scales and much larger size (even when born) are critical flaws. If the Hagelund specimen were to be taken literally and assumed to be a cryptid, a pinniped would be the most likely identification (far more so than 'Cadborosaurus'); of course, a misinterpreted known fish would be far more likely.

A Baby Cadborosaur No More. Part 8b: The Bay Pipefish

Poachers, despite a startling similarity to Hagelund's illustrated specimen, are problematic candidates as they are apparently incapable of undulatory locomotion and at-surface behavior is unlikely. Pipefishes don't look as similar but are capable of undulating at the surface and can be unambiguously described as "eel-like" or "sea snake-like"... unlike Hagelund's own drawing.

Hagelund's drawing portrays the upper bounds of the estimated depth (1-1.5 inches), so the difference from the above pictures of Bay Pipefish (Syngnathus leptorhynchus) may not be as great as shown. Bay Pipefish have been recorded up to 38.5 cm in total length (Bayer 1980) - comfortably similar to 40 cm, I'd say - and it seems likely that allometry could make them more similar to the Hagelund specimen. The equation Bayer (1980) used to estimate pipefish weight from length indicated that the fish were proportionally more massive at larger sizes (the rate was somewhat higher than cubed†) and the largest specimens tended to be underestimated in weight; this suggests that Bay Pipefish are proportionally thicker-bodied at large sizes. Another potential explanation is that Hagelund captured a pregnant male; males are somewhat smaller than females with a maximum size of 32.5 cm TL (Bayer 1980), although this is within a plausible margin of error, considering the Hagelund specimen was estimated rather than measured. It seems that there is some variation in Bay Pipefish head length (see below) which may be related to size as well.


Bay Pipefish match the described behavior and shape of the Hagelund specimen as well as the coloration, long snout, slender head, lips, and large dark eyes; the pelvic fins are absent and the dorsal and anal fins are small and transparent enough to be easily overlooked. The snout of the Hagelund specimen has a similar profile to that of a Bay Pipefish (with a bulbous protrusion at the end) which Hagelund mysteriously labels as a "hooked upper jaw". The Bay Pipefish lacks hair-like structures, although the mesh-like coloration on the ventrum (somewhat visible above) could potentially explain this trait; there is such a thing as a Hairy Pipefish, but they are found nowhere near the northeast Pacific. The biggest issues with the Bay Pipefish are the lack of teeth and whisker-like structures. Hagelund's illustration is very unclear as to where the whiskers are located (the original illustration is full of mysteriously interpretive lines), but since they protruded from the head, they can't be due to coloration and it would be implausible for Hagelund to mistake the pectoral fins for separate structures. All pipefish lack teeth, however some have inconspicuous tooth-like odontoid processes (Dawson and Fritzsche 1975)... which have not been described from S. leptorhynchus.


Bay Pipefish are not a perfect fit for the Hagelund specimen, but then, nothing is. Since the pipefish is more similar than any other northeast Pacific fish, the most reasonable conclusion is that the differences are due to the account being misremembered after nearly two decades. Perfect recollection after such a time period (or any time period, really) is probably impossible. Even if it turns out that poachers can fit the described behavior or there's some better fitting fish out there, the point will stand: LeBlond and Bousfield's identification of this creature as a cryptid is one of the least likely solutions available. Besides, if the account were to be taken literally, it would be some sort of weird, tiny, armored pinniped.

But wait, there's more! I'll quickly review the other weird candidates we dredged up and then it's time for an executive summary.

A Baby Cadborosaur No More. Part 8a: Pipefish in a Bucket

Internets. Is there anything they can't do?


This should quell any doubts that pipefish are unambiguously eel-shaped, can swim in an undulatory fashion and near the surface to boot. Many thanks to Scott Mardis for bringing this to my attention.

I'm thoroughly sick of the 'reptilian hypothesis', so I'll condense my aborted article into this: the Hagelund specimen is obviously not a plesiosaur or thalattosuchian.


It is time to move on to better candidates... I want to finish this series at some point. There are several species of long-bodied poachers (Agonidae) which are compellingly similar to the Hagelund specimen. Notable shared traits include proportions, large eyes, plate-like scales, and barbels (= "whiskers"):

It appears the pectoral fins can fold significantly as well. Poachers are also flexible enough to bend the head upwards.

Hagelund's description of his specimen undulating at the surface would be highly unusual for a poacher, to say the least. The pectoral fins are the sole source of thrust, with the exception of the caudal fin being used in the C-start escape response (Nowroozi et al. 2009). Pirates Cove seems to be rather shallow and poachers can inhabit intertidal waters, but getting a poacher to the surface may also be something of a challenge; they are strongly negatively buoyant - having heavy armor and no swim bladder - and typically use ground effect (due to being within 1 cm of the bottom) in addition to the pectoral fins for lift (Nowroozi et al. 2009). Poachers are capable of swimming in the water column, and when doing so their bodies pitch upwards significantly (5-20 degrees), apparently due to their considerable density (Nowroozi et al. 2009). So unless poachers behave oddly at the surface or behavior varies substantially between species, which is always possible, this is a major problem for this candidate.


The strongest candidate is the Sturgeon Poacher (Podothecus accipenserinus) which is reasonably similar in size and coloration, but are somewhat thick-bodied and large-headed comparatively. Other possible candidates included Pallasina barbata (intertidal, similar color, however very small) and Sarritor frenatus - it should be noted that there are many other poachers in the area, but they are either far too small or deep-bodied.

Pipefish next, then everybody else.
.