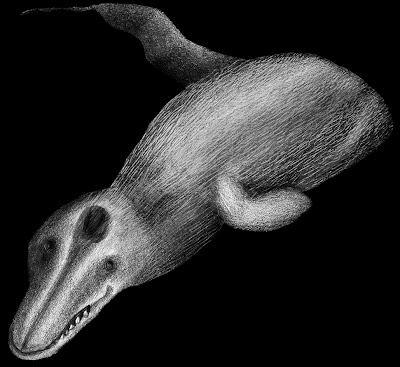 References:
Buchholtz, E. A., and Schur, S. A. (2004). Vertebral osteology in Delphinidae (Cetacea). Zoological Journal of the Linnean Society 140, 383–401. Available.
Uhen, M. D. (2004). Form, Function, and Anatomy of Dorudon atrox (Mammalia, Cetacea): An Archaeocete from the Middle to Late Eocene of Egypt. University of Michigan Papers on Paleontology 34, 1-222. Available.
Posted by Cameron McCormick at Saturday, May 28, 2011 3 comments:
Email ThisBlogThis!Share to TwitterShare to FacebookShare to Pinterest 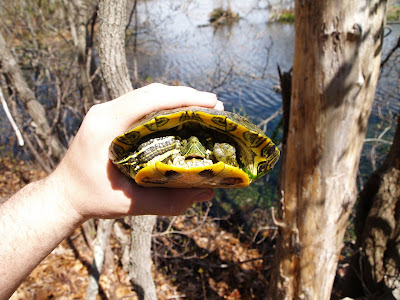 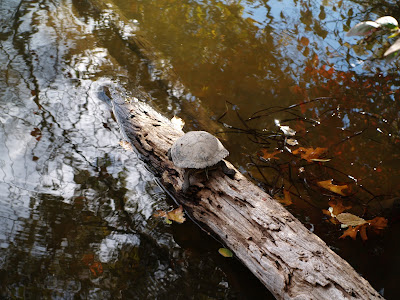 Kevin (named after actress Kevin Casey, of The Skydivers infamy) is still with me, although I'm honestly surprised. 165 days into my ownership, I noticed a piece of metal sticking out of the cloaca. Not knowing what to expect, I wound up pulling a sinker, line, and a partially-digested hook out of the turtle. Despite the potential to puncture internal organs from the hook and the line and the possibility of lead poisoning from the sinker, Kevin showed no signs of blood or really any indication that something that potentially-traumatic had just occurred. Still, it was probably lucky that it wasn't attempting to pass foreign object in the wild.
As for what damage a hook can do to a turtle, one snapping turtle which swallowed multiple hooks and a sinker was treated for lead poisoning and intestinal perforations (from the fishing line) (Borkowski 1997). There's not much information out there on non-marine turtles getting hooked, but I'd wager that a turtle surviving an internal hook with no obvious damage is one lucky punk.
References:
Borkowski, R. (1997). Lead poisoning and intestinal perforations in a snapping turtle (Chelydra serpentina) due to fishing gear ingestion. Journal of Zoo and Wildlife Medicine 28(1), 109-113. Abstract.
Harding, J. H. (1985). Clemmys insculpta (Wood Turtle). Predation-mutilation. Herpetological Review 16, 30. Available.
Saumere, R. A. (2001). Limb Mutilations in Snapping Turtles, Chelydra serpentina. The Canadian Field-Naturalist 115, 182-184. Available.
Saumere, R. A., and Bider, J. R. (1998). Impact of Agricultural Development on a Population of Wood Turtles (Clemmys insculpta) in Southern Québec, Canada. Chelonian Conservation and Biology 3, 37-45. Available.
Walde, A. D., Bider, J. R., Daigle, C., Masse, D., Bourgeois, J-C., Jutras, J., and Titman, R. D. (2010). Ecological Aspects of a Wood Turtle, Glyptemys insculpta, Population at the Northern Limit of its Range in Québec. The Canadian Field-Naturalist 117, 377-388. Available.
Posted by Cameron McCormick at Tuesday, May 03, 2011 4 comments:
Email ThisBlogThis!Share to TwitterShare to FacebookShare to Pinterest
Newer Posts Older Posts Home
Subscribe to: Posts (Atom)