I think that I've had my fair share of cryptozoology and anecdotal evidence. Things don't have to be gigantic or monstrous or poorly supported to be interesting. Being incredibly unusual helps though. I remember reading Walker's Mammals of the World a while back and coming across a strange account of a species of shrew able to withstand a man standing on it with no ill effects. An accompanying picture showed an absolutely bizarre spinal column with "armor" mostly on the thoracic vertebrae. With the magical power (to me) of access to journals both home and abroad, I've been able to track down the supremely named Hero shrew, Scutisorex somereni Thomas 1910.
Despite being so strange, the unique spinal morphology wasn't recognized until 7 years after the shrew was described and little information was learned for the next 80 years (Cullinane et al., 1998). There seems to be a long history of interesting things being found in Museums, of all places. Scutisorex was hypothesized to be related to the genus Sylvisorex judging by dental characteristics, although molecular evidence suggested that it diverged from Sylvisorex cf. konganensis and S. ollula in the mid-late Miocene (Querouil et al., 2001). The paper notes that the morphology of shrews is difficult to interpret clade-wise, so a polyphyletic genus is not a surprise - the possibility that the hero shrew is not even a distinct genus is shocking. The spinal column is remarked upon as being the most modified among vertebrates (Cullinane & Aleper, 1998); that evolving within a genus would be astounding. More molecular studies will probably clarify the position of the hero shrew, but regardless it seems that the unique spine evolved very suddenly. Something definitely punctuated the equilibrium here.

So what exactly is so unique about the hero shrew's anatomy anyways? Wikipedia's image demonstrates that this armored shrew is completely unremarkable looking externally and looks roughly similar to anythi

ng else that is small, mammalian and scampers around. The spinal column is a different matter entirely. The vertebrae count is the mammalian norm for the cervical (7), thoracic (14), and sacral (5) regions, although the lumbar region has 11 vertebrae, as opposed to the normal 5 (Churchfield et al., 2007). I'd be curious what sort of mutation led to this not-quite-doubling of vertebrae. In the mid to end thoracic and lumbar regions the vertebrae have been fundamentally modified: the lateral part of the vertebral arch have been modified into interlocking bony plates (Churchfield et al., 2007). Cullinane et alii's noted that a wide range of mammals (rodents, "insectivores", a didelphid and a gray "fox") studied had spines taking up 1.08% the body mass on average (all within one standard dev.), while this shrew's spine took up 3.97%, seven standard deviations above the mean. The ribs and skull are also more robust than is expected, although the appendicular skeleton is not. While fossorial mammals typically deal with loads by developing the appendicular skeleton; anecdotal and structural evidence indicates that this hero shrew can withstand enormous pressure, reported at 1000 times the mass of the shrew. In an accompanying paper, Cullinane & Aleper discuss the spinal musculature, something which has of course also been undescribed beforehand and hindered mechanical analysis. The most radical change was that the transverse spinalis group has been reduced, apparently due to the tubercles on the spine resisting torsion and shear, which the muscle group does in other mammals. Some of the other spinal muscles were also highly modified and the authors suggested that they could be considered new groups. Cullinane and another author (Bertram) later studied the intervertebral joints of the species and noted that the spine represents the only known bone-on-bone articulation in mammals and is capable of withstanding 4-5 times more torsion than a normal mammalian spine. While the specifics of the mechanics involved in these tests is out of my league, it is clear that this is one remarkable animal. 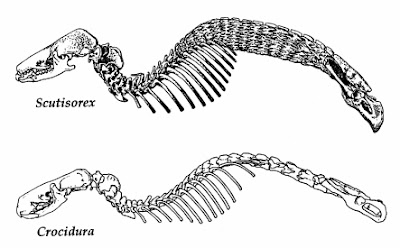 Taken from Cullinane & Bertram, 2000, Fig. 1. The genetic testing revealed Crocidura to be a fairly close relative, and shows the normal shrew, and to some degree mammalian, condition.

Why this species has such a modified spine is a mystery. The species is only present in the Eastern Democratic Republic of Congo and neighboring Rwanda, Burundi and Uganda where it is not common (and rather elusive) (Churchill et al., 2007). Churchill et alii's study attempted to determine the spinal modifications by determining its diet and thus determining its habitat. This large shrew species was found to be opportunistic but focused on earthworms, a rare trait for an African shrew but common in large temperate species. With its unspecialized limbs and diet, it was determined to be a partially subterranean (not fossorial) feeder, like many other shrews. The only possible specialization for this way of life was an unusually long digestive tract (possibly to digest worms), although the spine/rib modifications were not explainable.

Cullinane & Bertram wondered that if there were no known behavioral or ecological correlation to this structure, which there don't seem to be, then "perhaps complex morphologies can evolve without selection driving their adaptive trajectory." This is a rather astounding idea, what if the cause of the bizarre spine morphology is nothing more than a few simple mutations? Does it give any benefits to this species? Since it is noted as being uncommon, perhaps it doesn't...or perhaps it is recent enough that benefits are not entirely apparent. Maybe if given enough time this could evolve into a distinct group of mammals - Cullinane et al. 1998 conjecture that "this species may represent a breakthrough in the morphology of the tightly constrained structure that is the mammalian spine". That is an awfully exciting idea, a future radiation of mammals started by the Hero Shrew! Or not, it could always be an evolutionary dead end, a bizarre evolutionary "experiment" of sorts. If this truly did evolve within a genus, or at least very closely related to species, then it may represent an absolutely fascinating case study in punctuated equilibrium.

I can tell that something is up with me that I'm more far excited by this shrew than the notion of a super-gigantic-snake-mimicking-Amazon-archeocetes or whatever. What have I become...

Churchill, S. 2007. Feeding ecology of the armored shrew, from the north-eastern Democratic Republic of Congo. Journal of Zoology 273, 40–45. Available: Here 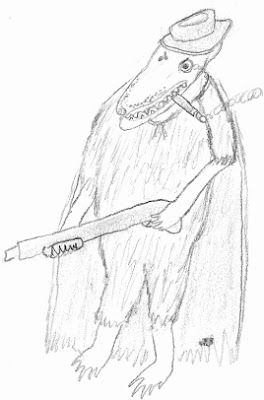 This is what Conway Morris actually believes.
Posted by Cameron McCormick at Saturday, December 29, 2007
Email ThisBlogThis!Share to TwitterShare to FacebookShare to Pinterest

How did people first discover that you could stand on the shrew without hurting it? Is that one of the checkpoints they have now?

Anyways, I think that those shrews are going to be the building blocks of the future, future floors that is.

I also assume that being called a hero will force the shrew to wear a cape at all time, except for when it's doing some new paper reporting, then it has to put on some glasses....

Anyway, this was a very interesting blog, without having anything gigantic, scary, or nonexistent, excellent job.

Speculation has it that the spine structure represents an adaptive response to the perils of foraging beneath particularly heavy rocks and logs.

Yeah, I was just going to say what byssus already did. Hero shrews can withstand taking a lot of weight on the back - not much good if a big rock falls on you, as you're still trapped, but it might prove useful in levering up stones when foraging. And some literature says that they do lots of foraging in streams where such a trick might be useful (I mentioned this in an article on amphibious murids: here).

There are wonderful Drawings in vol 1 (I think-- I'm not going into the freezing library!) of Jonathan Kingdon's African Mammals.

Just found this blog. Very cool articles you've written, and I'll be checking back again! Keep it up.

Hi, they have found another shrew called "Thor's Hero Shrew" - apparently it is another amazingly strong-spined creature. Named for Thor the God because of its strength and for a scientist with the nickname of Thor. For more look it up on Wikipedia.

I am not sure where you’re getting your information, but great topic. I needs to spend some time learning much more or understanding more. Thanks for great info I was looking for this info for my mission.

Hola! I've been reading your web site for a long time now and finally got the courage to go ahead and give you a shout out from Atascocita Tx! Just wanted to say keep up the great work!

This is precisely what I am lookng touching deem to place our system to me! Anyone enact skilled few incredible vacancy. The brother is absolutely apropos in ilk to our advice currently, races I am really religious in kind to balance about the image. Blesss amid deem to enormous proceeds.perfumes calvin klein

It is very interesting article in .. Thank you very much.