How on earth has it been almost a month since I've last posted?

With the semester coming to a screeching halt, I suppose I just got a little too caught up in work. I haven't had time to finish any lengthy posts, all I have are quite a few extremely rough drafts. Oh yeah, and numerous papers on the death penalty, ugh.


Anyways, to use a concept you're unlikely to see anywhere else on the internet; I've decided to revolve this post around a mysterious picture: 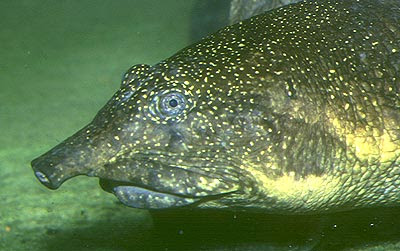 Amyda cartilaginea. Taken from this page by Indraneil Das and Ghazally Ismail. I hope me using this is okay...

I've shown this photograph to several people, and they've had no idea what this animal is. The consensus is that it is some sort of fish (perhaps eel)-like creature, although that is far from the mark. It is....

A softshelled turtle of the family Trionychidae. To see what the whole creature looks like, go to this gallery here. Instead of writing out a full post on this group, Darren has already written an article. Yay, less work for me. As for articles directly pertaining to this species, I was unable to find any, unfortunately. However, the book Turtles of the World by Franck Bonin, Bernard Devaux and Alain Dupre (2006 edition) was able to fill me in. I was actually inspired by the head of Dogania subplana (which is even more fish-like) in the book, although I was unable to find a good image online.

The long snout of this and other species are due to a habit of burying themselves under sediment with only their nostrils sticking out. Softshell turtles are capable of pharygeal and cutaneous respiration, and at least some species can obtain all their oxygen from the water using these methods, see here. The "soft" shells are actually as resistant to damage as those of other turtles and they effectively allow the turtles to have a lighter shell more able to be bent by muscles (to close on the head and limbs), be more streamlined, decreased mineral needs, improved camouflage, and allow cutaneous breathing (Alibardi & Toni 2006 and Scheyer et al. 2007). So long for no literature.

Back to Amyda, it is a nocturnal, predatory species that feeds on fish, frogs, shrimp, and water insects. Although The Crocodiles and Turtles of Borneo lists it as being common, Bonin et al note it as being heavily caught for meat and medicines. For more details on the anatomy, see the previously noted link.

I'll stop right there for now. If I can find a species with more literature and an eccentric appearance, perhaps I'll write on it too sometime in the near future...

I remember that picture, I thought it was an eel of some sort. Rather short post, it needs more controversy!

Controversy: These posts are too short!

There was one that looked just like this, minus the colorful yellow specks, in the Carettochelys tank at the Bronx Zoo years ago. We called it the Frank Purdue turtle - http://repdickcathcart.com/Assets/perdue2.JPG

I guess its hard to see the resemblance in that pic.