Hopefully this will still work for future readers:


Most people seem quite unaware that pangolins even exist. Apparently, only three specimens are held in captivity legally as of 2005 - so it's really no small mystery why. Despite some bizarre notions that they are dinosaur-like reptiles, these are mammals and are closely related to carnivorans (dogs, cats, seals, etc.) forming the clade Ferae (Beck et al, 2006). These are united with Perissodactyla, Cetartiodactyla, Chiroptera, and Eulipotyphla (some "insectivores") to form the oddly diverse group Laurasiatheria. If you are familiar with Family/Order names of mammals, then this figure from Bininda-Emonds et al 2007 should be of interest: 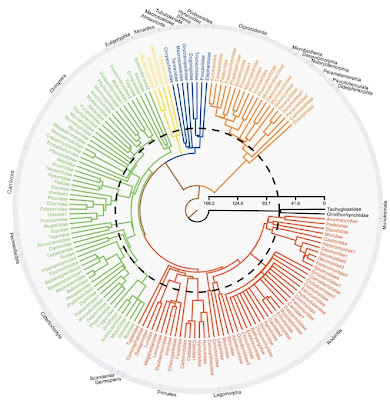 You'll notice that other mammalian groups with tubular snouts that eat ants (Aardvarks - Afrotheria; Anteaters - Xenarthra) are not related but all belong to different super-orders. There was an enigmatic European Eocene species called Eurotamandua which is classified as an anteater on the German wikipedia and a pangolin on the English wikipedia but is currently in an unresolved position. It could be a sister group to sloths and anteaters, a stem Xenarthran (it doesn't posses the titular vertebral structure) or a pholidotan (pangolin) (Hunter & Janis 2006). Despite all the convergences, pangolins/pholidotans have sharp scales made out of agglutinated hairs covering everything but the bottom of the head and body, and the inside of the limbs (Heath, 1992). One of these days I'll probably talk more about the strange morphology of these mammals, but it is locomotion that I am focusing on here.
Pangolins normally roll up as an anti-predator defense (only exposing the sharp scales) but they are also known to curl up and roll down hills to elude predators (Tenaza, 1975). Since the only large predators on the island where that was observed were humans and pythons, perhaps this is an aberrant behavior. Didn't Stephen Jay Gould write an essay wondering why no animals moved around like balls?
As you may have noticed from the video, the large pangolin Smutsia temminckii is, in fact, a facultative biped. While most sources just mention that fact, the video is useful in showing that the tail is held somewhat strait out (not dragging on the ground) and the arms are tucked in - other bipedal mammals are saltatory (kangaroo, sifaka lemur, jerboa, kangaroo rat, springhare) or have a vertical posture (humans, gibbons - sifakas again) so this posture seems to be unique as far as I know. Walking quadrupedally, the large pangolin Smutsia temminckii puts weight on the knuckles of its forefeet and curls its claws inwards like anteaters (Heath 1992). That position normally is associated with clawed animals (chalicotheres, sloths) - so is the bipedal posture an alternate strategy in not wearing down claws, or is there another factor involved? S. temminckii has hips more suited for load bearing than other species (Heath 1992), and bipedalism appears to be a unique behavior for the species. I have not seen any references to bipedalism in S. gigantea, a similarly sized relative also living in Africa. Many other pangolins are arboreal, and I am not certain if any other large species engage in bipedal locomotion. Although not specifying a species, Filler 2007 noted that the LTP (Lumbar Transverse Process) of pangolins have the same homology as the hominiforms, uniquely among mammals. The implications of this have not been discussed to my knowledge. So why am I asking so many questions? As far as I know, the benefits and mechanics of such a posture have yet to be thoroughly analyzed. I know, I'm disappointed too.
Just in case the other video ceases working at some point, here is a backup pangolin video:

I won't just stop with pangolins. Chris Taylor wrote on bipedal postures in a relative of the camel recently, and my next group is somewhere more along those (herbivorous) lines. They were presumed to be relatives of pangolins earlier, but of course are actually quite distant. I'm talking, of course, about Megatheriid ground sloths. Darren didn't mention sloth bipedalism in his ten strange sloth facts post - which worried me immensely - but it does seem to be pretty widespread in the literature. Phew.
Megatheriid sloths having a bipedal posture when feeding shouldn't come as a shock in the context of mammalian diversity, others such as pandas and chalicotheres probably engaged in a similar posture. Also, just about every reconstruction I see of Megatherium puts it reaching up to a tree with its claws in a bipedal sort of posture. However, tracks indicating both bipedal and quadrupedal posture have been found (Casinos 1996) so there's something interesting happening here. The paper goes on to study the limbs and vertebral column of Megatherium sp. (different species were hard to discern) and the forces put on them in hypothetical quadrupedal and bipedal postures. Results for strength indicators were inconclusive as the hindlimb bones were stronger mechanically but the forelimb bones seemed more efficient in a quadrupedal posture. A study of the backbone movements fit well with bipedal mammals, although the bending was noted as being too high. The femur is pretty bizarrely shaped (it is four times wider in the transverse plane than the sagittal one) - this goes against mammalian and Xenarthran tenancies. This does appear to enhance dealing with stress and since such a drastic change in one bone makes little sense in a quadrupedal animal, Casinos concludes that this was a bipedally adapted animal.

Chris Taylor's post showed that an animal can be adapted towards standing bipedally, so its not like this sloth was an exclusive biped. The possibility of claw prints being somehow erased in the bipedal tracks was not raised, but presumably since there were examples of both tracks types they could be easily distinguished. Maybe this sloth was adapted towards standing bipedally while feeding on trees and switched between quadrupedal and bipedal locomotion like...the pangolins in the videos. Even having a living example doesn't always help since apparently we're not sure what advantage this switching would give.

I tried and tried to find a Youtube video of a bipedal sloth but failed. Also, I realized that the title should have specified "in Mammals", but it sounds snazzier this way.

I can't access the article, but this abstract mentions how large and derived Glyptodonts possibly engaged in "strenuous locomotor activities" bipedally! Darren mentioned this first, of course.
Posted by Cameron McCormick at Monday, November 19, 2007
Email ThisBlogThis!Share to TwitterShare to FacebookShare to Pinterest

I didn't think that pangolins could get any cooler, but they just did.

That's neat. Some research says giant anteaters were once bipedal. Both my tamanduas will go bipedal occasionally. Pua just to beg and toddles along a bit. Stewie however will literally run on two legs when excited and then fling himself onto Pua for a wrestle match. I don't have video of that but here's one were I bribe him to toddle along. He stands and walks a bit regularly, but seems to be begging behavior.
http://www.youtube.com/watch?v=jTnUTejcc8w

Falculative bipeds among armadillos are fairly common, three-banded armadillos are actually digitigrade when they walk around, barely brushing the ground with their claws.

That might have some implications for crurotarsan studies mayhaps.

Sorry, that should be *fore*claws

Tamanduagirl, I'm curious about the research on bipedal anteater ancestors. Is their bipedalism part of some sort of defensive posture? Very interesting pet, I didn't know anybody kept them.

Raymond, I'll have to look into armadillo postures, I couldn't find much literature on it immediately but it sounds interesting.

And that's why I don't pretend to have posts that are completely exhaustive on a subject.

You've hit upon some interesting correlations. The bipedalism of tamanduas, vermilinguas, pangolins, armadillos, and ground sloths may be related to feeding behavior that depends on using the powerful forelegs in tandem. Destroying ant and termite nests requires a great deal of forebody power and the ability to reach and tear. This is done while standing on the hindlegs. In trees it is accomplished by using a three-point suspension with the prehensile tail acting as an anchor (Myrmecophaga excepted). (Binturongs and new world monkeys do the same thing).
The bipedal stance is also a defensive posture that frees the forelimbs as formidable slashing and gripping weapons (at least in silky anteaters, tamanduas and myrmecophaga). (I haven't watched pangolins except in film.)
The nine-banded armadillo also carries nesting material in its forelegs while hopping bipedally, but I think they do this only by hopping backwards. The standard depiction of ground sloths, as you know, is as bipedal folivores that used the forelimbs as branch grippers. The claws could have been used as leaf strippers, but this is just a guess. Prehensile lips could accomplish the same.
Oh yea, bears and dogs can be trained to walk bipedally, and "long-chassis" species like weasels and genets can stand bipedally "on lookout". Jackrabbits prove that you don't need a long tail as a counterbalance to stand bipedally.
I guess skunks are unique in being able to stand bipedally on their front legs, and can even take a few steps doing it. But the bush dog (Speothos) and genets (Genetta spp) can throw their hindquarters up vertically and stand on their front legs when scent marking vertical surfaces.
Thanks for that post, 'me Lord', and keep 'em comin'.

Interesting, Cameron, you had some details I hadn't known about. Also the aquatic possum post is good.

First time at your blog, thanks for earlier posting some info on the beaked whale at my blog the-arc.

Awesome post. A bipedal-walking pangolin was featured briefly in Attenborough's Life of Mammals, and I'm pretty sure it was a ground pangolin Smutsia temmincki. Indeed this is said to be the only species that engages in bipedality, which makes sense as it's the most terrestrial of them all (makes you wonder about the extinct giant species: they were presumably predominantly terrestrial). Incidentally, not everyone follows it, but it seems to have become fashionable to use some of the 'old' generic names for pangolins again, in part because some studies indicate that Manis sensu stricto should be restricted to the Asian pangolins.

You're right, I didn't mention sloth bipedality and perhaps should have. Tracks do appear to show occasional bipedal walking.

PS - I haven't forgotten that literature I owe you!