Let's start off with a mystery:

In a 1999 field report by Angel Moran Forés (readable: here) he claimed to have found and photographed a strange aquatic animal in Macas, Ecuador. He said it had white fur with brownish spots, was 35-40 cm long with no tail, had webbed fore and hind-feet, no pouch, and a proboscis. The specimen was never sold, so all we have to go on is a photograph and that description:

And now to make things interesting, here is a photograph of a Water Opossum or Yapok: 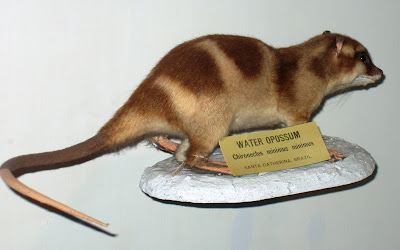 While living yapoks seem to have much darker fur (see here) for some reason either preservation makes the fur lighter or there is a light colored morph. Either way, both specimens have the same striking bodily coloration pattern (down to the barely visible dorsal stripe), which Forés did not mention. The size would be a little large, unless the legs were counted; but the main problem is with the weird anatomical features. Yapoks do have pouches (rear-opening, so maybe it was missed?) and tails and also lack webbed fore-feet and a proboscis. I for one can't see a proboscis in that picture, but I'll take the author's word for it. While new species are being discovered at a fairly impressive rate in this region of the world, I think this is more likely a poor case of taxidermy than anything. Of course with many things of a cryptozoological nature, this one doesn't appear to be wholly resolvable any time soon.

Aquatic adaptations in marsupials appear to be quite unusual. There don't seem to be any species of mammals that can't swim to some degree (except giraffes), but marsupials seem conspicuously unable to adapt to a semi-or fully aquatic niche. Apparently the logistics of keeping the young alive in a pouch while diving kept the marsupials from adapting in that direction. That is, except the yapok (Chironectes minimus) is the only species of marsupial to be adapted towards this lifestyle (Fish, 1993). I'll get into its tricks later.

Even less widely known than the yapok is the thick-tailed opossum (Lutreolina crassicaudata), also said to be quite competent in the water. It is the most carnivorous of all didelphids and is frequently compared to a mustelid ("mink-opossum") in appearance (Santori et al, 2005). The scientific name "Lutreolina" hints at an otter-like and thus semi-aquatic lifestyle as well. So is this an overlooked semi-aquatic marsupial?

The "lutrine opossum". Taken from this page. According to Walker's Mammals of the World this image (flipped) was taken from the New York Zoological Park through Joseph Davis.

A 2005 paper by Santori et al on the locomotion of the thick tailed opossum reveals that yes, there are some people who have considered this species semi-aquatic in the past. Didelphids as a group are apparently good swimmers, so the authors of the paper compared terrestrial species and the yapok to this species by using videotape. The climbing, jumping, and running capabilities of this species was also compared to the other opossums. L. crassicaudata actually does have some adaptations towards an aquatic lifestyle (buoyancy control, posture), and a unique gait separate from terrestrial opossums and the yapok, but curiously is not faster in the water than terrestrial opossums. It also lacks other adaptations such as webbed feet and the use of only the hind limbs (though some other semi-aquatic animals also use all their limbs). So while possessing some aquatic adaptations, the thick-tailed opossum is not even considered semi-aquatic. Apparently there isn't a term to reflect this semi-semi-aquatic condition. Perhaps a mustelid-like body plan has the side-effect of being able to travel in water slightly more efficiently than most terrestrial mammals.


So now on to (or rather, back to) the real McCormick, the yapok. Unlike lots of other didelphids, the yapok actually does have a pouch and a very unusual one at that. The pouch opens to the rear and has a powerful sphincter muscle able to keep water out, but maybe not necessarily airtight (somehow...) (Marshall, 1978). The young in the pouch are able to suspend breathing for a few minutes and tolerate low oxygen levels. Very oddly, there are some claims that opossums of the genus Didelphis (the Virginia opossum and kin) can also swim with young in the pouch, although how they were able to manage that has not been explained (Marshall, '78). The colossal Voss & Jansa 2003 phylogenetic study closely links the yapok and thick-tailed opossum with the genus Didelphis (plus Philander and Metachirus), so maybe a semi-aquatic or semi-semi-aquatic ancestor existed. Or maybe not. Regardless, the same authority with the unexpected fact concluded that maintaining the young in the pouch limits how far the marsupials can adapt to a semi-aquatic lifestyle. The fact that opossums managed it but Australian marsupials haven't (as far as I know) is remarkable enough as it is.

Marshall '78 has some other weird facts about the yapok worth mentioning. Despite being semi-aquatic, the species is still able to climb and uses its tail in a prehensile manner (the thick-tailed opossum can't, interestingly) and it is also capable of collecting nesting materials. These animals are also largely carnivorous and they are believed to use their un-webbed forepaws in the same manner as a raccoon. Despite apparently being considered nocturnal, the circadian rhythms of this animal are not apparent and it can be active day or night. The females somehow manage to have four to five teats...didelphids seem to have a tenancy towards an odd number of teats for some reason.

And there is a whole paper on just how weird the genitalia of the males are (Nogueiraet al. 2004). The males posses a rudimentary pouch which it protects its scrotum in only while moving quickly or moving in water. Unlike other didelphids, they also lack a cloaca. Weird, weird stuff.

It looks like another wretchedly busy week, so who knows when and what I'll write about.

Posted by Cameron McCormick at Wednesday, November 07, 2007
Email ThisBlogThis!Share to TwitterShare to FacebookShare to Pinterest

The sewers of nyc should really upgrade to those water opossums, they're so much cuter! I mean, come on, they have spots.

Thank you for owning up to the fact that giraffes cannot swim. In fact, I think that it is worthy of it's very own blog, where you can tell the world why this is physically impossible.

Are you sure that giraffes can't swim? This is one of those oft-mentioned factoids, but I'd like to know if it's true. It's also said in the books that camels can't swim, but I can state with absolute certainty that this is incorrect. Some people say that white rhinos can't swim - I have a hard time accepting this, but I've never seen it tested :)

Regarding the Ecuadorian 'mystery mammal', an examination by Didier Sanchez showed that it was a taxiderm hoax, and you're almost certainly right that it's a modified yapok.

Incidentally, marsupials may owe their paucity of amphibious/aquatic species to the fact that their babies tend to need prehensile hands at birth. This constraint may prevent them from evolving webbed digits and flippers. The pouch is less of a problem, as of course lots of marsupial clades have lost it.

Well, my sister is fairly certain of it at least. It's an age-old argument. I've seen some videos of giraffes crossing rivers, but it never got deep enough that they had to start swimming. The Guinness Book of Animal facts and feats claims that:

"Because of its extraordinarily anatomical shape the giraffe is one of the very few mammals that cannot swim - even in an emergency! Deep rivers are an impassable barrier to them, and they will avoid large expanses of water like the plague. On 26 September 1960 a giraffe escaped from its crate shortly after it panicked and fell into the water from a jetty. According to one eye-witness report the terrified animal sank like a stone without making any attempt to swim"


That's the only evidence backing that notion up, and maybe panicking had something to do with it. Surely if camels can swim giraffes could at least thrash around a little...

Good point about the hands, I wonder how far an aquatic creature can adapt and still have prehensile hands? Probably not very. I don't recall any of the aquatic ape theorists mentioning that...or the fact that apes are incompetent swimmers at best.

They have also been found on island surrounded by 14 ft deep water, but they could have easily walked across it.

I demand a blog to settle this once and for all. A few giraffes and a very deep pool would also be useful.

"Good point about the hands, I wonder how far an aquatic creature can adapt and still have prehensile hands? Probably not very. I don't recall any of the aquatic ape theorists mentioning that...or the fact that apes are incompetent swimmers at best."

admittedly they're not truly "aquatic" but certainly in the case of the sea sloths, there's no evidence they were losing the ability to grasp kelp strands with their manus throughout their evolutionary history IIRC.

It's more likely that the successful mammal and bird clades that made it to the water first were simply more mandibular oriented than anything else.Same applies to the mesozoic and paleozoic aquatic reptiles and birds.This seems to be the most parsimonious explaination at the moment.

As for apes being bad swimmers, well, what is present today are highly specialized members which are mere shadow of a once far more diverse clade.It's somewhat akin to saying apes can't thrive in temperate zones because none are present today.Yet pliocene remains of Dryopithicus are known from quite seasonal european deposits that indicate cold winters.

admittedly they're not truly "aquatic"

Exactly. Those are all either semi-aquatic animals like the opossum or terrestrial like humans. What I was going for is that fully aquatic mammals (cetaceans, sirenians) and near-fully aquatic ones (pinnipeds) lack prehensile limbs, having traded them in for flippers. How efficient could a swimmer be if it still had prehensile limbs? Granted sea otters have prehensile hands and can even give birth in the ocean, but they're still not adapted (capable of speeds in the 5-6 knot area). So perhaps a marine marsupial could have been possible had it been rather limited (and some strange selective pressure taking place).


It's more likely that the successful mammal and bird clades that made it to the water first were simply more mandibular oriented than anything else.Same applies to the mesozoic and paleozoic aquatic reptiles and birds.This seems to be the most parsimonious explaination at the moment.


As for apes being bad swimmers, well, what is present today are highly specialized members which are mere shadow of a once far more diverse clade.It's somewhat akin to saying apes can't thrive in temperate zones because none are present today.Yet pliocene remains of Dryopithicus are known from quite seasonal european deposits that indicate cold winters.

But if the diversity of apes (including gibbons and siamangs) is incompetent at swimming, wouldn't that hint at it being an ancestral characteristic and/or morphological issue? There could have been a specialized ape that took more to water than normal, but that's just speculative.

Further note: I saw "Pole to Pole" on the Planet Earth documentary today and it did show a giraffe walking across a flooded area. Curiously, it mentioned that impala can "barely swim", suggesting (to me) that an even longer neck and more spindly legs in the giraffe would render it nearly incapable of swimming.