Living in the United States creates the impression that the Virginia Opossum (Didelphis virginiana) is some sort of interloper from marsupial-infested Australia. Opossums are members of the family Didelphidae and order Didelphimorphia which include at least 60 species (numbers vary between sources). Didelphids are currently restricted to South and North America but in the past ranged to Africa, Asia, Europe, and Antarctica - the latter implying that they might have made it to Australia (there is no fossil proof of this to my knowledge). Phylogenetically they are placed at the very base of the marsupial supertree according to Cardillo et al 2004; most closely related are the 6-7 species of New World "shrew opossums" of the family Caenolestidae (Order: Paucituberculata). It goes without saying that the "possums" (Suborder Phalangeriformes) of Australasia are not directly related. Interestingly there is a third order of marsupials (Microbiotheria) from the New World that is grouped within the Australasian marsupials - a rather amazing phylogenetic situation. So with scores of species and 3 of 7 orders, the New World isn't a very place for marsupials after all.

Rather than continue with an overview of the order, I am going to focus on one group in particular, the woolly opossums. The subfamily Caluromyinae (Glironia, Caluromysiops, Caluromys) is shown as being basal in the didelphid family tree; typically it would be called "primitive" but this is misleading. Remarkably, as the title suggests, this group show convergences upon the primates. As noted by this journal which I unfortunately cannot access, the genus Caluromys shows features such as a large brain and eyes, small litters and slow development, and agile locomotion. Rather unexpected from a relative of the fairly humble Virginia opossum! Science has progressed from the days of large brained animals being more "advanced" or "better" than ones that are not - there are reasons for animals not all "aspiring" to be anthropomorphic. With that out of the way, the question is, why do these marsupials resemble primates? 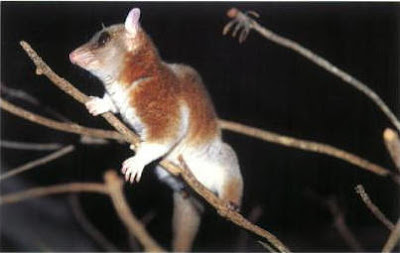 The woolly opossum Caluromys derbianus. Photo taken from this page and credit is due to Maya Nature by Thor Johnson. Note the resemblance to a prosimian such as, say, a mouse lemur.

Lemelin et al 2003 note that didelphids prefer a wide variety of habitats and the genus Caluromys spends most of its time in the canopy on thin branches. The hands and feet of this genus have longer toes and the hind limbs show a much more prominent big toe. The study in the paper demonstrated that while most mammals use a lateral sequence for walking (Right hand, RF, LH, LF) most primates use a diagonal sequence (RH, LF, LH, RF) while in arboreal settings. The paper supports the theory that an arboreal habitat in early primates shaped the gait and specializations such as the hindfeet by showing that woolly opossums display the same traits.

Aside from the resemblance to what an early primate may have looked like, members of the family Caluromyidae are interesting in their own right. Oh wait, did I say family? Sources disagree if all modern opossums are all members of the same family or not; the diversity of opossums (extinct or otherwise) in one family does seem rather high but I haven't heard anything definitive. I'll just vaguely refer to them as caluromyids or woolly opossums to sidestep this issue. Walker's Mammals of the World sets the genus apart from other didelphids by noting characters such as partially derived ankle features, the retention of a cloaca, an ossified bony palate, and inner ear structure. Interestingly, this group of opossums are distinguished for having retained a pouch whereas the 50+ species of the (Paraphyletic? Polyphyletic?) marmosid group lack one. A marsupial without a pouch, hmm. 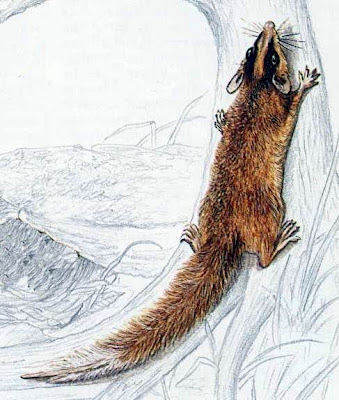 Glironia venusta, the "bushy-tailed opossum". Illustration taken from here. I'm not sure what language that is in... (Edit: Apparently Maltese)
Anyways, generally placed with the caluromyids (Cardillo et al 2004) or sometimes in its own family (Nowak, 1999) is the species Glironia venusta. It is similar to a genus of the aforementioned pouchless opossums (Marmosa) and is believed to be largely arboreal. There was a report mentioned in Walker's of this species leaping from vine to vine and apparently hunting insects - behavior not known with any other opossum species. Interesting though this species sounds, there have only been 9 specimens documented so information is a tad scarce.

Caluromysiops irrupta is another rare genus of caluromyid, apparently quite closely related to Caluromys. The species inhabits humid forests and is believed to arboreal and nocturnal; it feeds on nectar and probably has a comparable omnivorous diet to Caluromys. The familiar Virginia Opossum rarely exceeds a 3 year lifespan (record of 5) but this species, rarely kept in captivity, has a current record of 7 years and 10 months. But again, information on this species is lacking. 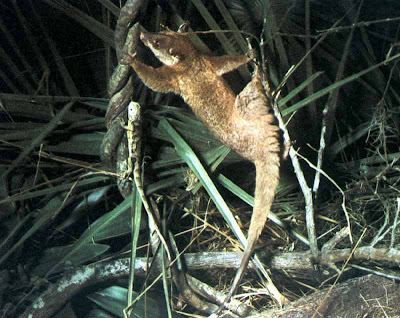 Caluromys laniger. Taken from this page (in Italian). One of the few pictures no explicitly copyrighted and it demonstrates arboreal movement to boot!
The genus Caluromys is of course the best known of the group, there are well over a dozen journal articles that I casually found on this genus alone. The species has been kept in labs and there are articles on hormone levels and nitrogen requirements for this genus, for instance. A pretty definitive article can probably be written on this genus but that is of course outside of the scope of this post, I only have so much time here. I will still try and concentrate on the big picture here though. This genus also drinks nectar from flowers and is believed to be a pollinator (Gribel, 1988) however it is known to eat other plant and animal material (Bucher and Hoffmann 1980). Caluromys species also has a long lifespan (6 years 4 months is the record) a small litter size (2-4 average) for an opossum and a near-exclusive arboreal habitat (Nowak, 1999). Could those also be viewed as convergences with the primates? C. philander and C. lanatus are fairly common and listed as near threatened by the IUCN Red List while C. derbianus is a vulnerable species. Glironia and Caluromysiops are listed as vulnerable as well (I'm surprised Glironia isn't data deficient).


I knew I could write a post on terrestrial animals! It wasn't much of a challenge really, like most of my post it has been floating around in my head for a few months. Sigh. Things are about to get very busy again, so who knows what I'll post next. A speculative post on opossum-men? Nah.

The woolly opossums sounds adorable. I think that anything with the word woolly in it's name is instant soft and cuddly by nature. With so many o's and l's how can it not be?

After reading this I would like to form a cult that believes that somewhere high in the trees, there is a race of opossum-men lurking around. It sounds like the sort of thing that would catch on quickly.

I'm not sure what language that is in...

Nice post, Cameron -- I've always had a fascination with marsupials, and with New World marsups in particular. I believe that Eisenberg and his coworkers (see Mammalian Radiations, U of Chicago Press) were the first to note the ecological similarities and structural correlates of certain "didelphids" and prosimians. And Caluromys is clearly an outlier when you look at New World marsupial encephalization quotients -- with C. derbianus and a few species of Marmosa in the same bandwidth. They deserve a lot more study, and the range of their antipredator behavior is fascinating.

Thanks Chris, being an American I'm naturally a very poor philologist.

Chris W., I just stumbled on to that paper, thanks for the notice. I haven't read anything on antipredator behavior, I'll have to check that out too.