Time management is a skill I can stand to improve upon. It never ceases to amaze me how an hour can fly by without me actually doing anything productive. And now I look back and realized that I haven't posted anything on here in two weeks! Surely I can't be that busy. Of course, I have no actual obligation to post here aside from a continuous gnawing sense of guilt...

In an attempt to alleviate that guilt, I'd like to introduce the cirrate octopodes. Along with other groups such as, say, mesoplodonts, these are among my (increasingly numerous) favorite animals. Predictably for an animal I like, cirrates are publicly poorly known and anatomically bizarre compared to the much more familiar incirrate octopodes. The namesake of cirrates are filament-like cirri of variable length and development paired with the suckers. Since these are not always readily visible, I'd suggest the easiest way to differentiate a cirrate from incirrate is that the former has a pair of fins used in lieu of jet propulsion. 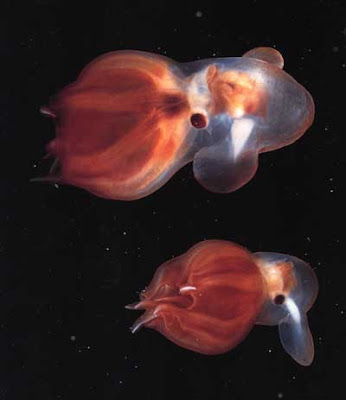 From the Friday Cephalopod at Pharyngula taken in turn from The Deep by Claire Nouvian. It was mis-identified as a deep-sea "squid".

These may seem like rather bizarre characteristics but they are actually ancestral and apparently quite ancient. A third group of Octopodiformes, Vampyromorpha or vampire squids, diverged from the cirrates and incirrates some time in the Paleozoic (250+ mya) according to a recent molecular analysis by Strugnell et al 2006. As demonstrated by the excellent Tree of Life webpage vampire "squids" do indeed share characteristics like cirri and fins (of which they have four in one stage) with cirrates but differ in retaining jet propulsion and a fifth pair of appendages. In a crucial post for cephalopod fans by PZ Myers there is a diagram on homology indicating that the reduced/absent appendages of Octopodiformes are in fact not the same as the tentacles of Decapodiformes (squid, cuttlefish, et cetera). o is a fossil cephalopod with a modified limb pair (homology not discussed) that was mentioned by Kluessendorf and Doyle 2000. While octopodes were though to be a recent radiation, this species dates from 300 mya in the Carboniferous. It has features such as a sac-like mantle fused to an indistinct head, lobed fins, and a lack of an internal shell. The paper didn't mention it, but that last feature is problematic since cirrates actually have cartilaginous shells. Is Pohlsepia actually an Octopodiform or an unrelated squid-like creature? Strugnell et al propose cirrates and incirrates diverged many millions of years later in the Jurassic implying that either internal shells were lost recently or actually re-evolved in cirrates. The matter of Octopodiform evolution is going to have to be untangled in a future post.

While cirrates do bear resemblance to Pohlsepia and the two other fossil octopodes, they certainly are not "living fossils" or "prehistoric survivors". I'll let Darren Naish explain to you why I also dislike those terms. A 2006 paper by Collins and Villanueva appears to be one of the most definitive work on this group to date and demonstrates many remarkable characteristics. Cirrate octopodes are adapted to living in deep and cold waters and display adaptations such as a gelatinous composition, reduced gills, lost ink sac, and lost/reduced radula. The cirri of this group's namesake have not been investigated but are believed to be sensory in function. This group also appears to have lost (or never evolved) the ability to change coloration but possesses photophores capable of generating light. Males do not have the sperm transfer arm (hectocotylus) of cirrates but they do posses enlarged dorsal arms for no clear reason. The internal cartilaginous shell is variable in shape and is associated with the muscles used to drive the fins. I'd like to suggest the possibility that the internal shell re-evolved when the animals abandoned jet propulsion for fin propulsion - it would be an interesting theory to test. 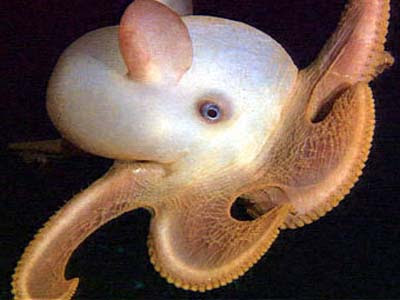 The "Dumbo Octopus" Grimpoteuthis sp. taken from Wikipedia.
As far as behavior is concerned the paper mention that jet propulsion was lost due to being high energy concerns although it could possibly still be present during burst swimming. The trait of high speed is not selected for and these species get around by benthic crawling with the arms, umbrella-style drifting, swimming with fins, and medusoid contractions i.e. jellyfish-like movements. Predation is little documented but these species are known to "balloon", invert their web (also in Vampyroteuthis) and give off phosphorescence when disturbed. The cirri appear to have some function in feeding along with suckers while enveloping or entrapping prey and they appear to be used to make currents and bring prey to the mouth. Of course, this behavior is generalized for the group and different species and genera all engage in different behaviors.

The paper concludes that while leaps and bounds are being made on research in this group, there are still many unknowns. The taxonomy is in tangles and the ecology is poorly known. Cirrates may be comparatively long lived compared with most other cephalopods and there is concern as to what effect fishing may have on this potentially fragile group.

As far as information goes I've hardly scratched the surface for cirrates. Consider this a potential warning for posts to come. However, they may not come immediately...

Good to see that you're back in action! Needless to say that those things are pretty cute, in an odd eight-legged way.

Re the plural of octopus: