It seems like I have a soft spot in my heart for weirdo relicts. As I recall, one of the highlights of my previous semester was finding the book Primitive Fishes which discussed why fish like bowfin, gar, sturgeon and "fish" like lamprey and hagfish still linger on. It never ceases to fascinate me how an entire radiation can be reduced to a few species. I'll have to wait for those guys when I feel like talking about fish, but today I will discuss a group related to the softshell turtles, the Carettochelyidae.
This family of turtle has a single living species Carettochelys insculpta, the pig-nosed turtle of New Guinea and Northern Australia. It was described from the late 19th century as a New Guinea species (hence the alternate name Fly River turtle) and it wasn't known to have a breeding population in Australia until the 1970's (Georges & Kennett 1989). The species does not have epidermal scutes like most turtles; coupled with the fleshy snout and leather carapace and plastron it resembles members of Trionychidae, the softshell turtles. The limbs are paddle-like with two claws, and the species has been called the species of freshwater turtle most suited to an aquatic environment. I have not seen studies on the shell/plastron of this species, the reason why it evolved, and what advantages having such a shell would be; Trionychid shells offer many apparent advantages (lightweight, bendable, strong, able to absorb oxygen) although the pig-nosed turtle and extinct relatives do not have the same integumentary adaptations (Scheyer et al., 2007). It takes water in through the mouth and up through the nostrils, which may serve a respiratory function (Georges & Kennett 1989); I haven't seen any figures for how frequently it needs to surface, so the efficiency of this isn't clear. Carettochelys is apparently capable of living in salt water as well as rivers (Friar, 1985), although I have not seen any information if specimens do indeed move from New Guinea to Australia or if it posses adaptations to live long term in such an environment.
The distribution itself is unusual, since Carettochelys is the only freshwater non-pleurodire (side-necked turtle) in Australia (G. & K.), although one early authority considered it to be a pleurodire that convergently evolved upon Trionychidae (Friar, 1985). This apparently wasn't based upon biogeography and I'm baffled why the neck anatomy wasn't a dead giveaway. Due to the presence of flippers and a form of locomotion in between a freshwater and marine turtle (Friar, 1985) as well as the superficial similarity to Trionychidae, pig-nosed turtles were once considered to be transitional between marine and softshell turtles (Friar, 1983). Superficiality aside, Carettochelys is now strongly linked to the family Trionychidae forming the clade Trionychia, grouping with extinct forms in Trionychoidae, which in turn groups with the families Dermatemydidae and Kinosternidae to form Trionychoidea (Meylan et al., 2000). In a predictably unpredictable sort of way recent genetic evidence suggests that Trionychoidea is an invalid group, and that Trionychoidae is a distinctive lineage that split off very early from other turtle (Krenz et al 2005). Previous molecular clocks calculated pleurodires and cryptodires to have diverged 176 and 175 million years ago respectively with Trionychoidae branching off 155 million years ago, supporting one model of them being basal cryptodires. However, another possible model in Krenz et al 2005 suggests that Trionychoidae is a paraphyletic group encompassing the first two major divisions in the turtle lineage! If Carettochelys is the most basal turtle known that would be astounding (and the early worker was right about a pleurodire connection), though I think the previous model was much more probable. Genetic evidence seems to be undergoing a lot of flux, so I think it will be safe to wait before making any bold conclusions (which the authors didn't). 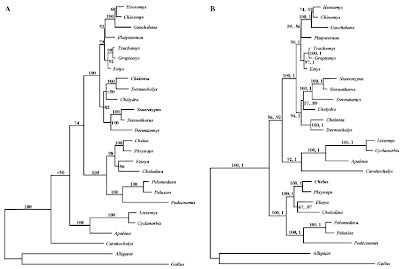 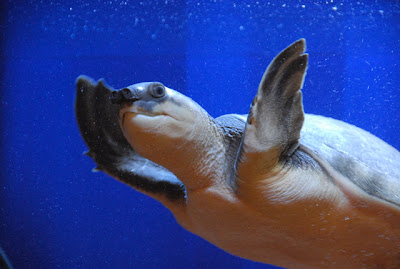 A photo marked "public" from Flickr. Note that the flippers are wider than those of sea turtles and have two prominent claws.

Regardless of whether or not this species occupies a very interesting position in the turtle family tree, its fossil relatives should be of species interest, well, to me at least. How does a group of animals wind up having only one species left and what caused it to survive? The group has been known since the Cretaceous in Asia, where it spread to Africa, Europe and North America post-KT only to wind up going extinct (Joyce et al., 2004). As of 1988 there appear to have been 6 genera of the family (18 were reported, many were unrelated or synonymous) (Meylan, 1988) in two subfamilies: Anosteirinae and Carettochelyinae. Anosteirine Carettochelyids are distinguished by the presence of marginal scutes which Carettochelyine Carettochelyids lost, apparently independently from Trionychidae (Joyce et al., 2004); other distinguishing characteristics include a small size (25-38 cm carapace length), one or more spines on the dorsal keel, and modified vertebral scutes and xiphiplastra (fourth lateral plate on the plastron) (Meylan, 1988). Large size is apparently a plesiomorphy in trionychoids which Carettochelyines retained - Carettochelys has a 55 cm+ carapace (Georges & Kennett, 1989), and Burmemys had one over 1 m (Hutchinson et al, 2004). Relict fish also tend to be rather large, although I can't be sure if size offers the same advantages to Carettochelys, if any. It is noted that this group is highly adapted to riverine environments (Joyce et al., 2004), and it is possible this is why (perhaps coupled with omnivory and large size) they survived the KT extinction and continued to straggle on like choristoderes.
Actually, it is somewhat puzzling now why this species has such a limited range. Georges & Kennett 1989 noted that it is a very broad omnivore, leaning towards herbivory, and it has been known to consume fruits, leaves, aquatic insects, fungi, and mammals such as flying foxes (presumably scavenged). It can of course survive a wide range of habitats include saline ones and its relatives have been known to inhabit temperate zones, so the authors suspecting it had to do with seasonal movements or the requirements of young individuals. Regardless of some areas with high densities it is considered a rare species (that term being hard to define), and it occupies home ranges much larger than those of other aquatic turtles: 36 hectares or 7.6 km linearly, much more than turtles of comparable sizes (Doody et al., 2002).
So here we have it, a remarkable relict species which may have survived due to its size and freshwater habitat and now appears to be somewhat constrained by it. Despite the late discovery and apparent rarity, this species does seem to be very well-studied; I've covered about half of the articles I've come across, many of which were from this decade. There certainly is a lot more to learn about this vulnerable species for those interested.

Is this what most American kids do on their 21st birthday anyways? Sigh...

Meylan, Peter A. 1988. Peltochelys dollo and the relationships among the genera of the Carettochelyidae (Testudines: Reptilia). Herpetologica, 44(4), 440-450

Scheyer, Torsten M. et al. A plywood structure in the shell of fossil and living soft-shelled turtles (Trionychidae) and its evolutionary implications. Organisms, Diversity & Evolution 7, 36–144
Posted by Cameron McCormick at Sunday, January 06, 2008
Email ThisBlogThis!Share to TwitterShare to FacebookShare to Pinterest

Bravo! A longtime personal favorite of mine. A toast of Gewurztraminer to your birthday and the Pig-Nose!

Happy 21st! It's all downhill from here.

Moving on.. no no no, the skull of Sandownia is most definitely not 60 cm long: in fact it's more like 60 mm.

I thought I went crazy there, but I double-checked and it definitely does say "60 cm in condobasylar length" and figures 2-5 have a 30 cm scale bar. Did they mess up the units like NASA here? I was pretty confused why they didn't discuss the size anyways. A super-gigantic Trionychoidean would have been nice, but oh well...

Well, something somewhere got really, really screwed up. I checked, and you're right: Meylan et al. do say that the Sandownia skull is 600 mm long (p. 523), and in all of their figures their scale bars makes the specimen look huge. So I dug out a newspaper cutting I have from September 19th 2000, where an article in my local newspaper announces the discovery of Sandownia. Two photos show Martin Munt - the former senior curator at Dinosaur Isle (where the holotype is accessioned) - posing with the skull (and it is definitely THE skull: the Sandownia holotype). In both photos it is cupped in his hands (or someone's hands anyway: can't be sure in one of the photos). Martin is similar in size to me, so based on my hands in front of me now I estimate that the actual length is - yes - more like 60 mm. Come to think of it, 600 mm for a turtle skull would be exceptional: how big is the skull on an Archelon for example? Probably about 600 mm.

My conclusion is that Meylan et al. royally fucked up, and both screwed up the scale bars in their figures and got the length wrong in their text. By curious coincidence, I'm meeting with the second author on the paper - Dick Moody - this Thursday and will alert him to this problem.

Thanks for flagging this. For various reasons I've followed the discovery and description of Sandownia, but to my surprise I had totally missed this most egregious of errors...

I must disagree with the very heart of your post. It should not be called a pig-nosed turtle, for that calls into mind some frankenstein like creature. The turtle did not steal the nose of a pig and attach it to it's own face. Rather it has a nose that is slightly comperable to a pig's snout, while remaining completely turtley.