On this old post, I mentioned the factoid that the vampire squid has four fins at one developmental stage. Vampire squids (Vampyroteuthis infernalis), as mentioned at this other old post, are a distinct group of cephalopods usually connected with octopodes - although this may not be the case. And yes, continuing with the recent trend this is the sole species of an entire order (superorder?) which may have originated as early as the Devonian.
Despite the very strange morphological feature of another pair of fins (briefly), I've seen no discussion of it and assumed it was some bizarre slip of the pen until I saw the picture I linked to earlier. Considering that all other cephalopods have either one pair of fins or none, this occurrence really should have raised eyebrows. Mercifully, the article by Donovan et al. (available on the Internet Archive) not only appears to be the first discussion of this oddity, but demonstrated that the vampire squid is not an isolated case.

For one thing, the Chiroteuthid Grimalditeuthis also possesses 2 pairs of fins as an adult and Chiroteuthis does in juvenile forms (Donovan et al 2003), although if you note from the links the secondary pair of fins are referred to as "fin-like flotation devices" and the larvae of Chiroteuthis are, well, extremely bizarre with siphonophore imitating growths which appear to be retained. Since this is not present in any other species of Chiroteuthid or decapodiform, we can fairly confidently say these are not homologous structures. It would be interesting to if the "fins" are modified portions of existing fins or non-homologous structures - or both maybe. But this is aside from the point.

Trachyteuthis is a fossil coleoid from the Upper Jurassic which was first described in 1896 (known since at least 1829) and subsequently reconstructed something like this. Other specimens hinted at the possibility of two pairs of fins; the specimen described by Donovan et al. made it clear that the species did posses them. The specimen was at the upper size limit for the species (~380 mm gladius length), so there is no question that this is an adult specimen. The animal was preserved showing the dorsal surface with the four fins present; they each appear have a base and the proximal pair has thicker muscle bundles. The fins appear to be directly attached to the gladius, although it is not clear if by a fin root pocket or directly by cartilage. Trachyteuthis, apparently had a well-muscled mantle and could presumed capable of jet propulsion, so these fins were likely used for stability or control of altitude rather than propulsion (Donovan et al 2003), like cirrate octopuses. The potential mechanics of why two pairs were needed was not discussed, although since Vampyroteuthis re-absorbs its extra fins presumably they don't offer that much of an advantage (for its lifestyle). Here's the obligatory link on many-finned fishes, which demonstrates that extra fins may sometimes have advantages.

So what exactly is Trachyteuthis? There is a noted resemblance between the three-part gladius of this species and Vampyroteuthis (plus Mesoteuthoidea and Prototeuthoidea), although Vampyroteuthis resembles Loligosepia much more, suggesting Trachyteuthis is a sort of side branch. The arm crown is a more definitive way of determining cephalopod identity; while fossil Trachyteuthis have left the impression of eight arms, it is possible for two more arms/tentacles/filaments to have been present and not preserved. The authors conclude that the four fin condition may have been primitive in Octobranchia, and it cannot be determined if all coleoids once possessed this feature (Donovan et al., 2003).

So there we go, we went from a factoid occasionally mentioned in books and websites to a potentially very old feature. Since vampyromorpha appears to be a very old lineage, I don't find the suggestion that all octopodes also started off with four fins. Would the extra fins be detectable in their embryos (do incirrates absorb fins?) as it is in juvenile vampire squid? I should mention that Pohlsepia was an incredibly old (~300 mya) "octopus" with eight arms, two fins, and no shell; although that last feature suggests it wasn't an ancestor of cirrates/incirrate octopodes which presumably split in the Jurassic from an ancestor with an internal shell. If the shell was mis-interpreted as something else and it was an octopod-ancestor maybe four fins wasn't an ancestral characteristic for octopodes, or vanished quickly. The lack of soft bodies preserved and the apparent fact the the gladii of fossil cephalopods tend to convergently evolve (Donovan et al., 2003) would seem to make fossil cephalopods a taxonomic nightmare. It could be possible that Trachyteuthis was an unrelated cephalopod that also possessed a feature one of Vampyroteuthis' ancestors evolved (and somewhat lost), but that coupled with gladius similarities does suggest a connection, albeit a rather tenuous one.


Ah, I like not having to look up a couple dozen articles. I've got a handful of post ideas at once here (most lengthy), so let's see what happens. Probably no more fossil cephalopods, yeesh. 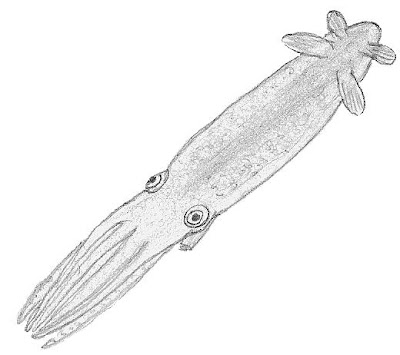 Attempted re-re-reconstruction of Trachyteuthis. I chose to portray this as a pelagic Vampyromorphan - characteristics of this group include a broad gladius extending the full length of the mantle (~380 mm) and no clear head/mantle differentiation. Earlier reconstructions showed the latter feature, although that appears to be speculative. The body is reconstructed as being bullet-shaped like a pelagic squid (e.g. Loligo) assuming the fossils were somewhat flattened; the impressions support the idea of large eyes. I chose to portray it with 8 appendages (filaments hidden or lost) with a single row of suckers (ancestral to vampire squids and octopodes?) and no cirri (a deep water adaption?). An ink sac and chromatophores are probably not present, unless it converged upon decapodiformes. I'd suggest that one pair of fins could be held in a plat plane and the other somewhat upwards, perhaps in an analogy to the pectoral/pelvic fins of fishes or the wings of Microraptor; they are <70 mm long.
Posted by Cameron McCormick at Wednesday, January 09, 2008
Email ThisBlogThis!Share to TwitterShare to FacebookShare to Pinterest

I wonder what else has been caused by a "bizarre slip of the pen" worlds could be created, children could be given horrendous names that will lead them to turn into mass murderers, or it could result in confusing one rather curious individual who decides to write about it.

You also have Palaeoteuthis which has a gladius that looks almost exactly like some modern squids, but the soft tissue preservation apparently links it with the Vampyromorphs. Its all a bit odd.

The DNA work is interesting, when I last looked at these things (2001ish) Vampyroteuthis and friends were clearly octopodiforms. I have a feeling that Pohlsepia is a side branch experimenting with being an incirrate before the incirrates started properly.