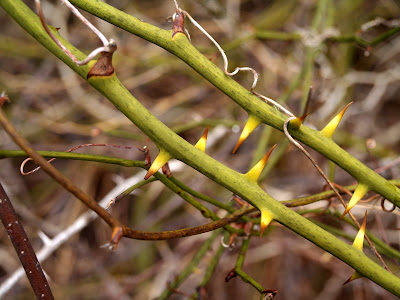 What's this strange, sessile, photosynthesizer doing on The Lord Geekington?

Common Greenbrier (Smilax rotundifolia) frequently forms immense thickets which make trekking through the woods nigh-impossible without a machete or flamethrower. I fondly recall one instance of getting hooked into a patch below a nest of angry hornets; somehow I remain among the few souls to go through these things voluntarily. Judging by the capacity of this species to form bleak monocultures, I assumed this was an introduced species that went invasive - how wrong I was. 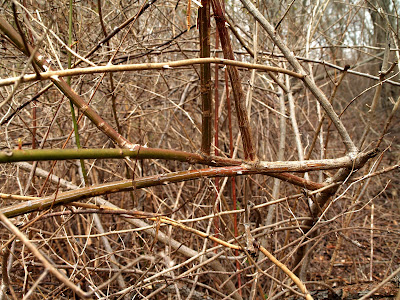 Transition into a woody portion of the stem.
In the 19th century, nearly 80% of the Northeastern USA was cleared for agriculture (mostly pasture) but by the mid-20th forest covered exceeded 70%, where it remains to this day (Bellemare et al. 2002). Smilax rotundifolia is a native species that goes 'invasive' in post-agricultural sites, growing over and eventually shading out other shrubs and herbaceous plants (Hemond et al. 1983, Ohman 2006). The super-dominant species can turn grasslands into scrublands, making naturally occurring fires less frequent and more intense (Ohman 2006). Greenbrier also forms a dense understory in post-agricultural forests where it has a deleterious impact on forest regeneration, causing low tree density and diversity (Abrams and Hayes 2008). In some areas it appears Smilax will continue to run rampant without intervention (Abrams and Hayes 2008), but curiously it has been reduced in at least one locale due to peripheral shading from a maturing forest (Hemond et al. 1983). 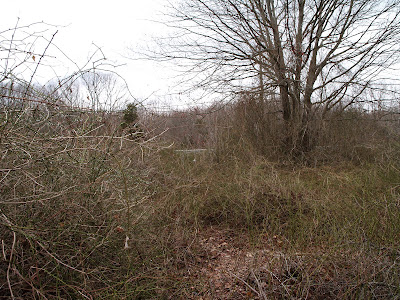 I challenged myself to take the ugliest photo possible. This is supposed to be a trail, by the way.
It doesn't seem clear if Greenbrier will eventually return to its pre-disturbance state any time soon, if at all, as the degree of human disturbance in the Northeast is a singular situation. Smilax is very hard to get rid of as rhizomes (underground stems) allow for dispersal, can persist for years without above-ground stems, and the plants are resistant to herbicides (Richburg et al. 2000 - citing Gleason and Cronquist 2001, Carey 1994). In an ironic twist - the species is Threatened in Ontario! What a topsey-turvey world we humans have unwittingly created.

Bellemare, J., et al. (2002). Legacies of the agricultural past in the forested present: an assessment of historical land-use effects on rich mesic forests. Journal of Biogeography 29, 1401–1420. Available.

Richburg, J. (2001). Woody invasive species and their role in altering fire regimes of the Northeast and Mid-Atlantic States. Proceedings of the Invasive Species Workshop: the Role of Fire in the Control and Spread of Invasive Species. Fire Conference 2000: the First National Congress on Fire Ecology, Prevention, and Management. Miscellaneous Publication No. 11, Tall Timbers Research Station, Tallahassee, FL. Available.
Posted by Cameron McCormick at Sunday, March 28, 2010
Email ThisBlogThis!Share to TwitterShare to FacebookShare to Pinterest

Thanks for the knowledge, I have a very standard.

Maine is having a hot dry, near drought summer. None of the pictures was taken less than six weeks ago. Costumes rock 60s costumes

much obliged to you for an incredible post. anthologies