I've had Mega-Turtles on the mind after working on the Great Snapper, a speculative species with a size ranging from being comparable to a very large Alligator Snapping Turtle up to very large Alligators. What a strange sentence. Anyways, while it may seem that Markus and I were being a little... overenthusiastic for creating a freshwater turtle capable of weighing over a tonne, it is actually rather conservative compared with some fossil species, a few of which lived remarkably recently.


But first, a brief discussion of turtle measurement. Size is mass, but as Mega-Turtles are known only from fossil remains, linear measurements will have to be primarily relied upon. Strait Carapace Length (SCL) should be used as the most basic unit of turtle measurement, as Curved Carapace Length, Carapace Width, and Total Length are of limited value outside of its context. I'll be defining 'Mega-Turtles' as species regularly exceeding 2 m SCL, as such sizes were not confirmed until quite recently and are extreme in comparison to extant species. 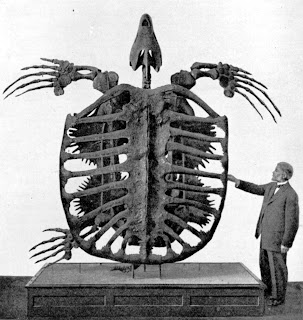 Archelon ischyros from Wikipedia Commons. This specimen has a 1.93 m SCL, 2.18 m carapace width (partially over the curve), 3.4 m total length, and 4.58 distance from the tips of the flippers (Wieland 1909).


The Cretaceous sister taxa Archelon and Protostega are both reported to exceed 2 meters in carapace length (Shimada and Hook 2004) - alas, I have been unable to find descriptions of these specimens in peer-reviewed literature. The website Oceans of Kansas mentions a 3.4 m total length Protostega in the Dallas Museum of Natural History which has the potential to fit the bill, if barely. The 4.6 m Archelon mentioned may be the same as the Pierre Shale specimen reported to have a 4.5 m total length and 5.25 m flipper span. The former figure yields an estimated SCL of about 2.5 m - I really would have preferred if it was mentioned in the description though!
The sister clade of protostegids also appears prone to gigantism; extant leatherback turtles (Dermochelys coriacea) commonly exceed 1.5 m SCL and have a reported maximum of 1.85 m SCL with a 0.95 m width (Wood 1976, Head et al. 1999 - citing Pritchard 1971). The proportionally narrow carapace in leatherbacks, even accounting for measured curvature in Archelon, probably means that a similarly-sized protostegid would be far more massive. Apparently, the extinct stem-leatherback Psephophorus sp. was in fact capable of exceeding 2 meters SCL (see here) or even 12 feet total length (3.65 m) but - and you may detect a pattern here - I have not been able to find any proper write-ups! Psephophorus species were alive until quite recently, reportedly the Pliocene, with the 2+ m specimen being found in the Miocene. I may explore this highly obscure clade at a later date - if I feel like getting frustrated - but I had another taxa in mind for the origin of this post.
Not all potential Mega-Turtles are close relatives of leatherbacks, a notable exception being the marine(?) Eocene trionychid Drazinderetes tethyensis which probably had a 2 m SCL carapace (1.5-2.282 m SCL, 1.279-1.447 m CW) (Head et al. 1999). The Pleistocene Mega(?)-Tortoise Colossochelys atlas is reported to have a  ~2 m SCL by some (Head et al. 1999 - citing Auffenberg 1974), however Wood (1976) argues that the length should be 1.8 m and the specimen in question was apparently abnormally large. Whatever the case, I will not get into it here, as these were also not the species for whom this introduction was intended.

Ah, Colossochelys - I remember Bakker mentions that one in The Dinosaur Heresies. Did it really get to "four tons or more", or was he being a bit overenthusiastic there? (I believe the size he gives for Megalania is a bit large, too.)

Sounds like Bakker had the alleged '12 foot carapace' in mind when he made the weight claim - although he must have missed when it was revised down to size in 1889 and 1974.

Is Ais Florida or an island chain in a new north american inland sea?

We're keeping the location of Ais vague until the project gets some sort of proper publication. It is possible to figure out from contextual clues though...