The history of Supersnakes and historical Python sp. range.

One of the major catalysts for my previous post was discovering that a supersnake hypothesis of sorts had actually made it into an academic journal. Unlike reports of outsized boids in the 20-30 foot (6-9 m) range, supersnakes are far outside the recorded or projected maximums. It has been hypothesized that supersnakes are a new subspecies or species, possibly a Pleistocene relict or even a non-snake. Distinctive characteristics suggesting a new species outside of size are rare, and it should be noted that large snakes are prone to wild exaggeration. Murphy & Henderson mention that large snakes already have mechanical problems, so a theoretical supersnake would have to overcome pumping blood to extremities and blood pooling in the tail. Rectilinear locomotion will presumably become impractical at some size, so a supersnake may also have to be entirely aquatic. Unless one presumes that Gigantophis* has had unrecorded examples of very outsized specimens, there is nothing to indicate a snake or snake relative has gotten much larger than 10 meters. So for numerous reasons I find it extremely improbable that one of the largest living or recently living animals is an undiscovered species of extremely big snake.
*Not in the snake crown group, although it was a constrictor. Mosasaurs, which aren't are a sister group to snakes, were the largest squamates at 15 meters long.

Stothers 2004 did not discuss the mechanical or ecological implications of supersnakes, but instead suggests that a population of large pythons existed in Northern Africa and Southwestern Asia - where they do not live today. Another focal point of this paper is that historical evidence of giant snakes (aside from mythology and interpreted animal remains) has had a huge effect on serpent lore. Since this affects the history of the sea serpent and perhaps the giant anaconda reports, this should be of interest to cryptozoology. The author rhetorically asks if we are "dealing with zoology or cryptozoology", although to me it clearly falls into the latter category (as we shall see). Peer reviewed articles on cryptozoology, in journals I can find, are exceedingly rare, so I find the very existence of this article interesting. Oh yes, and it mentions the cetacean centipede.

Ancient literature on giant serpents is apparently quite sparse until the Bagrada river incident of 256 B.C. where Regulus and his troops met a monstrous serpent. After it ate several men, it was fired at with javelins and darts which had no effect. Eventually its spine was crushed with a rock fired from a ballista and it was overcome with spears. When it died, according to one author, its corpse polluted the landscape for a considerable time. The 120 foot skin was then brought to Rome, allegedly measured under the instruction of the Senate, and was viewed as "an object of wonder to all". The description of the "feet of the ribs" (which don't actually move) made it clear this was a boid using rectilinear locomotion, although aside from that observation I do not find most of this story trustworthy. The story was apparently used to foreshadow the defeat and capture of the general in the following year by some, making it something of a legend. The detail of it repelling darts (or arrows) and javelins also seems rather unrealistic. I agree with Stothers that we can probably discount that this was an outright fabrication or that the animal actually was numerous crocodiles, the anatomical details hint at a real snake being involved somewhere. The author suggested that the length in feet may have been confused for rib "feet" somewhere along the line. The world's largest snake skeleton (22 feet, 26 originally) appears to have far in excess of this number, so I find this possibility very unlikely. The final option, the one Stothers plumps for, is that snakes two millennia ago actually could reach 120 feet in length. He probably should have discussed exactly how big a "foot" back then was anyways, and that snake skins can be stretched to 140% the original length while carefully avoiding stretching (Murphy & Henderson 1997 p.25). After reading through the reports, I've become cynical enough to suggest at least a preserved skull (and preferably the rest of the skeleton) to demonstrate snake size.

Size is not the only issue involved, the presence of a large snake (Python sp. ?) near the Mediterranean is remarkable enough as it is. Supposedly Ptolemy II Philadelphus had a 45 foot "Ethiopian" snake, although he may have actually had 21 and 19.5 foot snakes. Stothers suggests that the lengths may have been combined (and further exaggerated), and if this actually was a trend it could have huge implications for the other stories. This and other stories from Africa and Arabia support the notion of large indigenous pythons.

India is known to have giant snakes (Python molurus), but Stothers discussed stories from this region regardless. During Alexander the Great's conquests in the sub-continent, a king supposedly possessed two snakes well over 100 feet, although since only the "head" was seen, Stothers thinks this may have been something of a joke. Alexander himself supposedly displayed a 75 foot long snake, but Stothers suggests that this and other large reports may have been something of a "circus-show hyperbole". In one incident a report of the maximum size of Indian snakes was exaggerated from 24 feet to...500 feet! This might even be worse that giant squid claims. While there's nothing to suggest a range or size extension, these stories of "ox-swallowing and elephant-toppling" snakes undoubtedly had an effect on the image of giant "serpents". 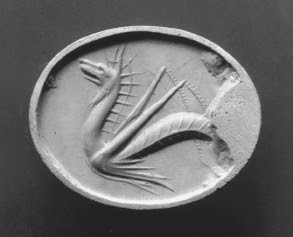 Apparently this fifth century B.C. Greek gem was meant to show a connection between snake observations and serpent legend - I don't see how.The crest and structures behind the "neck" suggest and oarfish to some degree (and its pelvic fins). I assumed the archetype for a maned serpent originated much later and further up north...

As the above picture indicates, Stothers moves from "terrestrial" serpents to sea serpents. He says that ancient reports of sea monsters rarely resembled modern ones (the above one excluded apparently) and had a variety of causes. "Large snakes" or the impression of them, can theoretically be caused by some sort of weather phenomenon, large fish and whales. While not relevant to our theoretical population, this still effects the image of supersnakes. I must comment upon Stothers insistence that fish continue to grow until they die - even if a fish continued to add weight at a steady rate (which I really doubt) the cube law would make the fish grow less and less per amount of weight added. His reference to "some prehistoric sharks" reaching 100 feet in length (!) is either an incredibly outdated reference to C. megalodon or related to Richard Ellis' suggestion that Parahelicoprion grew that large (A notion I have never heard discussed or mentioned elsewhere). Despite the subject, Zoology isn't really too focused upon in this paper. The author's affiliation with NASA and very little information online about him puzzles me even further...
Oh yes, the Scolopendra aka cetacean centipede aka many-finned makes an appearance. Two rarely mentioned references are mentioned: the rib of a thousand-footed specimen from Italy was mentioned by Theodoridas and another mutilated 48-foot specimen mentioned by Antipater. Stothers mentions speculations that it (Aelian's original mention) may have been a 120 foot whale with suckfish attached to a belly or ripples appearing as if many fins are at work. The giant squid was mentioned as a (dubious) candidate, demonstrating its inevitability while discussing sea monsters. Despite the author's claim, one group of extinct fish did have numerous fins, although it is undoubtedly a coincidence. Exactly why this bizarre creature was mentioned is not very clear. It is later suggested to be "possibly related" to African serpents, despite not really being described as serpentine. The only possible connection I could think of is that the numerous ribs of snakes could be confused for actual appendages in a rotting carcass. The insistence that it doesn't fit in with any of Heuvelmans' categories is strange (since it was partially defined with the original sighting).

Looking over everything, I'd say this paper definitely falls under the category of cryptozoology. The discussion of snakes and snake-like creatures and their place in the development of snake lore is interesting, but I think it could have been covered in a separate paper. Tales of giant Indian snakes and cetacean centipedes and their implications lead away from what is truly interesting, a unique Python sp. population. The snakes could be relatives or members of the Indian P. molurus or sub-Saharan P. sebae (hence sp.), and it is not clear if their ranges were larger or they were actually brought over by humans. It is possible that a unique species was involved as well, and I'm surprised Gigantophis wasn't brought up (since it lived in Egypt - in the Eocene). Heuvelmans made mention of giant snakes from North Africa, which wasn't brought up either, but it appears there is more evidence to support the existence of this population. So here we go, a potential new species that allegedly reaches large sizes, a supersnake of sorts I suppose. Stothers suggests that ancient pythons may have reached larger sizes and that while there is not proof of snakes over 45 feet long, "it is hard to deny categorically that they actually existed." It is hard to deny, but also impossible to prove. As demonstrated numerous times, the size of large snakes is prone to exaggerations or outright lies. If even estimates from a few years ago can be dubious, I sincerely doubt the accuracy of reports several thousands of years old. It is possible for species in the past to have had more common large specimens, although there is no physical evidence for snakes far exceeding the maximum known sizes today. Historical evidence can have its uses in Zoology, but I think that describing new, possibly very large species is beyond what it is capable of. It does give us a clue where to look for large python bones, and all somebody has to do is dig up a few bones.


And yet again, another conclusion that we need more information to really make a conclusion.

Mosasaurs aren't excluded as snake sister taxa. Lee (2005) found that even if varanids are constrained to be distant from snakes (as molecular analyses suggest), mosasaurs still claded with snakes (fig. 9).

HEllo Cameron ,i'm back again and with lots of information about this subject ,remember the finds of Adriana in 1994 Chili,Chubut of a truly Supersized Duo pf Unknown Boid Snakes of which both we're stunningly large ,50 foot or more and the LArge unknown one with a head of more than 0,7 m,seems to be a Monsterous 60 foot (18-20,5 M) to 65 foot long,and that was ,for now Bigger than the Just Freshly found Titanoboa,from Colombia,of which i think pretty of growing still to do,and the information on those is little to less, still and there not sure about anything of the dimensions ,or even the place of the vertebrae,they found,...
More will follow soon...