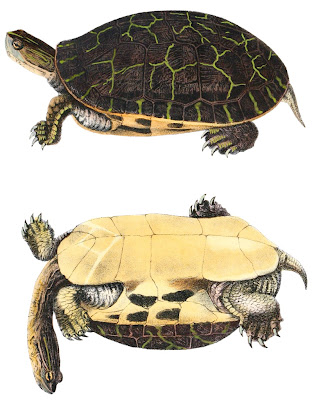 Deirochelys reticularia, an emydid with the unfortunate common name 'Chicken Turtle'. This public domain illustration was taken from the Wikipedia Commons.
The 1994 edition of Turtles of the United States and Canada speculated that Deirochelys are carnivorous as juveniles and take increasing plant matter with maturity - a typical emydid trait - and avoid competition by utilizing an unusual feeding strategy (Ernst et al. 1994). By the next edition it became clear that Deirochelys are highly carnivorous at all stages in life, feeding on aquatic invertebrates and tadpoles in ephemeral habitats (Ernst and Lovich 2009). It seems shocking that the basic biology of an animal exploited by humans (hence the common name) could be so poorly understood even in recent years, although this is probably not at all unusual for uncommon and uncharismatic fauna.
Deirochelys are small to medium-sized turtles, with males reaching a strait carapace length of 16.5 cm (6.5") and females reaching 25.4 cm (10") (Ernst and Lovich 2009). The head/neck length is 75-80% of the SCL (about the length of the plastron), much longer than those of similar emydids (Ernst and Lovich 2009). The elongated neck, flat and narrow skull, elongate thoracic rib heads, and highly developed hyoid of Deirochelys are traits shared with another emydid, the Blanding's Turtle, and it appears both species use pharyngeal suction in conjunction with movement from their long necks to capture fast moving prey (Ernst and Lovich 2009 - citing Jackson 1996, Demuth and Buhlmann 1997 also Stephen and Wiens 2003 - citing Loveridge & Williams 1957, Bramble 1974). Here is feeding in an artificial setting courtesy of YouTube:
Deirochelys does not normally encounter fish.
Despite the similarities with Blanding's turtle, Deirochelys is placed in the emydid sub-clade Deirochelyinae along with Chrysemys, Pseudemys, Trachemys, Malaclemys, and Graptemys - while the other species, semi- or fully terrestrial as opposed to aquatic, are placed in the clade Emydinae (e.g. Ernst and Lovich 2009). A topology of Deirochelyinae where Deirochelys is the most basal species has been supported by a study of morphological and mtDNA data (Stephens and Wiens 2003) and one of mitochondrial and nuclear DNA (which were otherwise quite discordant) (Wiens et al. 2010). While Stephen and Wiens (2003) erroneously classify Deirochelys as omnivorous, it still appears likely that the ancestral deirochelyin and emydid were.
As Deirochelys inhabits ephemeral wetlands generally unoccupied by other turtles, it has a number of unique adaptations to deal with the pressures. Seasonal drying forces turtles into terrestrial refuges, where survivorship is higher than the aquatic period of spring to early summer (Buhlman et al. 2009). However, extended droughts can be devastating - one lasting over a year in a 5.1 hectare Carolina Bay killed all mature females, hatchlings, and yearlings (Buhlman et al. 2009). Deirochelys has a thin shell that offers little protection from predators, and a single otter can enormously impact a population (Buhlman et al. 2009). All mature females in one population reproduced (60% raised two clutches), maturity can be reached shortly after a drought, and the minimum age of maturity (and implied lifespan) is very low for a turtle - 5 years for females and 2 for males (Buhlman et al. 2009).
And on a more trivial note, it appears Deirochelys is quite the adept climber:
The ability to climb vertical surfaces is surprisingly common amongst turtles... but that's a story for another day.
References:
Buhlman, K., Congdon, J., Gibbons, J., Greene, J. (2009). Ecology of Chicken Turtles (Deirochelys reticularia) in a Seasonal Wetland Ecosystem: Exploiting Resource and Refuge Environments. Herpetologica 65(1) 39-53. Available.
Ernst, C., Lovich, J., and Barbour, R. (1994) Turtles of the United States and Canada. Smithsonian Institution Press: Washington.
Ernst, C., and Lovich, J. (2009). Turtles of the United States and Canada. John Hopkins University Press: Baltimore, Maryland. Partially Available.
Stephens, P., and Wiens, J. (2003). Ecological diversification and phylogeny of emydid turtles. Biological Journal of the Linnean Society 79, 577-610. Available.
Wiens, J., Kuczynski, K., and Stephens, P. (2010). Discordant mitochondrial and nuclear gene phylogenies in emydid turtles: implications for speciation and conservation. Biological Journal of the Linnean Society 99, 445-461. Available.
Posted by Cameron McCormick at Wednesday, May 19, 2010
Email ThisBlogThis!Share to TwitterShare to FacebookShare to Pinterest

That one otter sure can be a jerk! You have some impressive awards on here--has it gotten the attention of any potential employers yet?

I unsuccessfully applied to work at the Tennessee Aquarium (entry level of course). Wish I could get paid to work with birds.

It certainly is shocking that a turtle species can take a hit like that and still be OK - I guess Deirochelys is the turtle equivalent of a guppy with its die-fast-breed-faster lifestyle.

Getting any position is very difficult at the moment, undoubtedly due to the competition we're up against. Both of us need a friggin' break.

There should be a 'follow' button in the upper left-hand corner. I generally manage my blogs by cutting and pasting them into the 'follow' thingy on the Blogger main page.


Are you starting your own blog?

The ability to climb vertical surfaces is surprisingly common amongst turtles...

The Asian big-headed turtle is an amazing climber. So much so that I named mind "Clymer" after this ability.

Thank you for some other informative website. The place else may just I get that kind of information written in such a perfect method? I have a venture that I am simply now running on, and I’ve been at the glance out for such info.ant extermination