We can safely say that Spirula is an unusual coleoid cephalopod with a ventrally curved ("endogastric") planispiral shell, a vestigial radula, a photophore on the tip of the mantle, and oegopsid (cornea lacking) eyes (Warnke and Keupp 2005, Warnke 2007, Young 1996). That's about the limit of what can be said concisely... 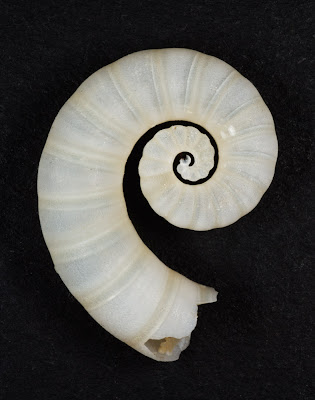 The internal planispiral shell of Spirula, taken from scamazine's flickr. While this shell looks similar to those of the extinct ammonites, it curves ventrally rather than dorsally. This illustration shows how the shell fits into the animal.

Spirula was formerly considered to contain several species (see here) but now only S. spirula is valid. Spirula has two disjunct populations in the Atlantic and Indo-West Pacific Oceans; a molecular study of intraspecific variation suggests that individuals from Fuerteventura and New Caledonia are distinguished to a degree typical of separate species (Warnke 2007). The lifespan of the species is only ~20 months, making gene flow appear to be unlikely between the populations, but individuals closer geographically have not been investigated yet (Warnke 2007). With the sparse molecular and morphological data on Spirula variation, much more work needs to be done in order to (re-)establish multiple species.

So now that we haven't resolved the number of Spirula species, what exactly is it? Spirula certainly is a unique looking cephalopod and many sources (e.g. Wikipedia) place it in a monotypic order. Warnke and Keupp (2005) suggested that Spirula is the most basal decapodiform and further suggest that it can be used to study ammonite development! There are prominent morphological distinctions between the groups - ammonites tend to have shells with exogastric coils (heteromorphs are of course exceptions) and four prismatic layers while Spirula has a shell with endogastric coiling and two prismatic layers (Warnke and Keupp 2005). However, the initial chambers (protoconch) of ammonites and Spirula show morphological similarities and the mode of mineralization appears to be the same (Warnke and Keupp 2005). Warnke and Keupp (2005) cite prior preliminary molecular evidence to support the notion of Spirula being the most basal decapodiform and imply that similarities are plesiomorphies. Later molecular studies contradict the placement used by Warnke and Keupp (2005) but the issue of Spirula/ammonite similarities being homologies or homoplasies is still unclear. Spirula development will certainly be an interesting topic to investigate regardless.

More recent molecular analyses suggests that Decapodiformes consists of two orders (rather than 4) - Sepioidea (containing Sepiidae, Myopsida, Sepiolidae, Idiosepiidae, Spirula) and Teuthoidea (Strugnell et al. 2006). Spirula consistently grouped with Sepiidae and it should be noted that the proposed clade has the synapomorphies of sperm placement in females and the structure of the statoliths and tentacle clubs (Lindgren and Daly 2007, Strugnell et al. 2005). Their next nearest relative is either Myopsida or Sepiolidae, but either way Spirula is fairly nestled within the Decapodiformes (Lindgren and Daly 2007, Strugnell et al. 2005). The earliest probable member of Sepioidea is the early Carboniferous Shimanskya which is either a member of the Spirula-lineage or another taxa that convergently lost the nacreous layer (Strugnell et al. 2006). This fossil and the molecular clocks suggest that many clades are far older than previously thought, e.g. Sepiidae was previously thought to have originated in the Oligocene but apparently diverged around a couple hundred million years earlier (Strugnell et al. 2006)! Supporters of the Spirula-is-basal camp could argue that this incredible revision suggests that Spirula is not placed correctly, but other evidence in Strugnell et al. (2006) implies that many decapodiform lineages are similarly ancient. Undoubtedly this will undergo further revision, but it seems very unlikely that Spirula is the most basal of the Decapodiformes.

Despite apparently existing in large numbers, much of the life history of Spirula remains poorly known (Lukeneder et al. 2008). Study of shell isotopes suggests that the juveniles are born in waters >1000 m deep, migrate to warmer waters from 400-600 m as adults, and then migrate back down into deep and cold waters (Lukeneder et at. 2008). It's worth pointing out that Lukeneder et al. (2008) suggest that future studies of the Spirula life history can be applied to ammonites...

Lindgren, Annie R. and Daly, Marymegan. 2007. The impact of length-variable data and alignment criterion on the phylogeny of Decapodiformes (Mollusca: Cephalopoda). Cladistics 23, 464-476.

Warnke, Kerstin. 2007. On the Species Status of Spirula spirula (Linne, 1758) (Cephalopoda): A New Approach Based on Divergence of Amino Acid Sequences Between the Canaries and New Caledonia. IN: N. H. Landman et al. (eds.). 2007. Cephalopods Present and Past: New Insights and Fresh Perspectives, 144-155. Springer.

Warnke, Kerstin and Keupp, Helmut. 2005. Spirula—a window to the embryonic development of ammonoids? Morphological and molecular indications for a palaeontological hypothesis. Facies 51, 60-65. Spirula can also be seen bearing gifts on my Christmas card. Unusually among cephalopods, the buoyant shell puts the animal in a head-down orientation (presumably because it had bottom-based ancestors?). I accidentally depicted it without skin of the mantle.
Posted by Cameron McCormick at Sunday, December 28, 2008 8 comments:
Email ThisBlogThis!Share to TwitterShare to FacebookShare to Pinterest
Newer Posts Older Posts Home
Subscribe to: Posts (Atom)