A Most Peculiar Turtle

Shortly after 8 a.m. on June 20th, 2010, at approximately this location, I happened across a melanistic turtle with an ~8 inch/20 cm carapace which had just successfully crossed the East Bay Bike Path. It appeared to be an emydid, but somehow I was unable to pin down the identification. Could it be a variant, or something more unusual? Or am I just crazy? 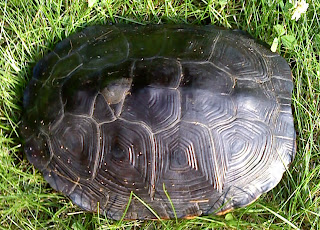 My best approximation of a dorsal view. The fourth vertebral scute has been damaged (and patched up by people?) and some of the costal ('rib') scutes appear to be abnormally shaped. Traits relevant for classification include the 'sculpted' appearance of the scutes, the vertebral ridge, and patternless dark brown coloration. 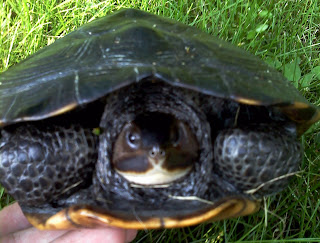 The jaws appear to be particularly thick and are the widest point of the head - which is brown/black/white and distinct from the otherwise greyish skin. The ventral surface of the carapace is orange and black, and the plastron is orange-ish and unpatterned. 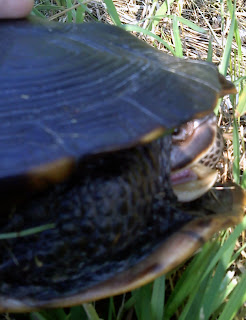 A lateral view demonstrating that the lower margin of the upper jaw is rimmed with ivory white, the same shade as the lower jaw.
This specimen is clearly not an Eastern Box Turtle, Spotted Turtle, Painted Turtle, or Slider, which leaves two remaining candidates... assuming an exotic isn't involved.
Wood Turtle? 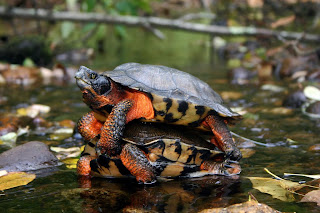 Wood turtles (Glyptemys insculpta) doing their thing. Note the difference in shell pattern (and lack thereof). From Flickr user man of mud. Original.
Wood Turtles frequently reach an SCL of 20 cm (Walde et al. 2003) have a dark sculpted carapace, subtle vertebral ridge, a primarily orange plastron, and somewhat similar facial coloration as the Warren turtle. However, the Warren turtle only had access to brackish water, which Wood Turtles apparently avoid, and lacked extensive orange or red pigmentation. That in itself is not conclusive, but facial morphology is: 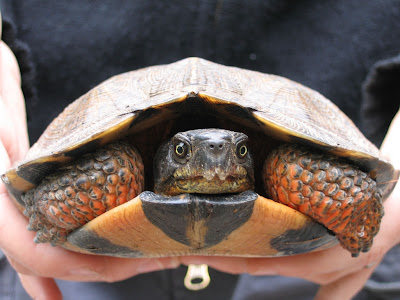 From Flickr user ajschu. Original.
Wood Turtles lack the massive jaws of the Warren turtle, and have two projections on the upper beak clearly not present in that specimen. There's a possibility that a Wood x Blanding's Turtle hybrid could have head morphology more similar to the Warren turtle, but as the Blanding's half of such an individual is not native to Rhode Island*, such an individual would be an extreme oddity.
While we can dismiss the species as a candidate, this Wood Turtle site is still worth checking out. I should probably give them proper coverage at some point.
* They are, however, present in nearby Massachusetts.
Diamondback Terrapin? 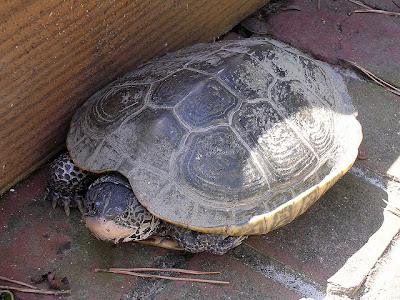 Northern Diamondback Terrapin, Malaclemys terrapin terrapin from Flickr user nicoleym. Original.
I had seen (and removed) a road-killed terrapin two days before the Warren turtle, which looked comparable to the above individual, and at the local Audubon I occasionally fed some hatchlings (which were getting a 'jump start'). While the coloration pattern is very different from the Warren turtle, the shell and head morphology looks very similar. Northern Terrapins in particular are highly variable, so do any out there resemble the Warren turtle? Yes they do: 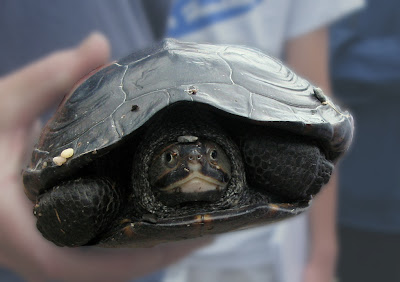 From Flickr user sandy richard. Original.
So there you have it, the Warren turtle in unambiguously a dark-morph Northern Diamondback Terrapin and not some bizarre exotic. Terrapins are only known to lay eggs at one site - two miles away - so the individual I observed may have been attempted re-colonization. Increased melanin in turtles may protect sexual organs from ultraviolet radiation and is correlated with territoriality and aggression (see abstract by Dominy) - although of course the study has yet to take place. More on terrapins soon...
References:
Walde, A., Bider, J., Daigle, C., Masse, D., Bourgeois, J.-C., Jutras, J., and Titman, R. (2003). Ecological Aspects of a Wood Turtle, Glyptemys insculpta, Population at the Northern Limit of its Range in Québec. Canadian Field-Naturalist 117: 377-388. Available.
Posted by Cameron McCormick at Tuesday, June 29, 2010
Email ThisBlogThis!Share to TwitterShare to FacebookShare to Pinterest

Sorry to see that Maine has lost you. It appears you are doing your natural history on the RI-MA border. Good discussion here, excellent detective work, and a top notch identification.

Best of luck in your future adventures.

Thanks Loren! I'm not sure where life will take me, but I'll be sure to visit Maine regularly.

It could take you to Korea~!

I helped a turtle very much like this across a road in the Catskills several years ago. Its plastron was ivory colored and unmarked. I didn't have a camera with me, but the overall shell shape was very similar.