It all began in the comments section of a Tet Zoo (v. 2.0) article, Statistics, seals and sea monsters in the technical literature: 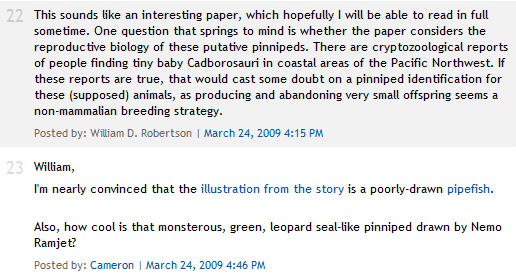 And what a cool illustration it was. Some time after this comment was posted, I received an e-mail from Michael A. Woodley and Darren Naish with a draft of a manuscript expanding on the 'Hagelund specimen as pipefish' hypothesis and its implications. I joined the endeavor, and after a seemingly-Sisyphean cycle of submission, review, editing, and rejection, this became of it: 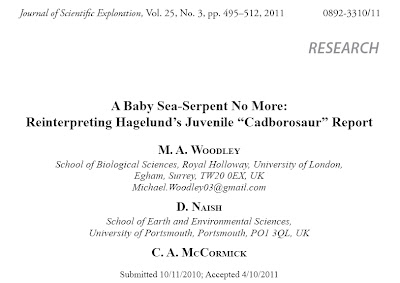 The main argument of Woodley et al. (2011) is that the Hagelund specimen, an enigmatic creature reportedly captured in Pirate's Cove Marine Provincial Park in 1968, is most likely a Bay Pipefish (Syngnathus leptorhynchus) and not an undescribed species. What makes this significant is that LeBlond and Bousfield (1995) connected the Hagelund specimen to the cryptid 'Cadborosaurus' and used it as evidence of a reptilian identity for the cryptid on the basis of being apparently precocial and relatively small compared to adults. The 'reptilian hypothesis' is now supported only by the purported cold-bloodedness of 'Cadborosaurus', and as this assertion is probably impossible to test, there is no reason to further entertain the hypothesis.

So why risk being regarded as unemployable for examining cryptozoology at all and making enemies by reaching a negative conclusion? I think that cryptozoology has promise, the discovery of new species (including from anecdotal evidence) is not at all unusual and a mountain of fascinating and sometimes compelling data have accumulated. The problem is that few analyses make their way into peer-reviewed literature and they are typically tainted by naïveté, apophenia, rampant speculation and, worse of all, a strong belief in the existence of the cryptid being investigated. I'll admit that on the sliding scale of belief and disbelief I am far towards the latter in regards to 'Cadborosaurus' and marine cryptids in general, which is the perfect position to be in as far as I'm concerned. I sincerely hope Woodley et al. (2011) is viewed as a step in the right direction; while it admittedly appears in a venue which doesn't have the best reputation, it is by no means lightly reviewed and I think it is about as object as an analysis of the given topic can get.


Much, much more will appear on this article in the near future. Before continuing, I would like to give my gratitude to William A. Hagelund for reporting his specimen and LeBlond and Bousfield for bringing it to further attention. While I disagree with their opinions, I admire their guts for having discussed it at all.