I've covered marine cryptids extensively on this blog, so I figured one more post couldn't possibly make the proverbial grave I'm digging for my credibility any deeper. I think. In recent posts I experimentally subjected a proposed type of 'sea serpent' report to rigorous qualitative and cladistic analysis, and then set out to determine if another proposed 'type' could be classified amongst marine vertebrates, as the authors claimed. I am convinced that most 'sea serpent' reports are too vague to be classified as anything (mundane phenomena or otherwise) and that proposing a classification for a purported animal which bears no strong resemblance to any known clade is a futile effort. This does not mean that future reports should be ignored or that cryptids which bear an obvious resemblance to known clades (e.g. cryptid beaked whales and dolphins) should be discounted - but I seriously question the continued use of 'sea serpent' types unless some very compelling evidence is documented.
I think sea serpent 'types' are a potential goldmine for those interested in speculative biology. A while ago, I made some drawings for a recent and rather obscure sea serpent classification and did my darnedest to come up with a plausible interpretation of the given description. Just how, I ask, is one supposed to depict a near-spherical animal with a carapace, oily hair, and quills? Here's my best effort, circa 2005:

Tim Morris, aka ~Pristichampsus, informed me that he has been utilizing information from this blog to create his own take on the sea serpent 'types'. Tim's style is in strong contrast to whatever I was doing back then, and he has created some seriously top-notch speculative beasts. Here is his 'Type 5 Carapaced' sea serpent in all of its redoubtable glory: 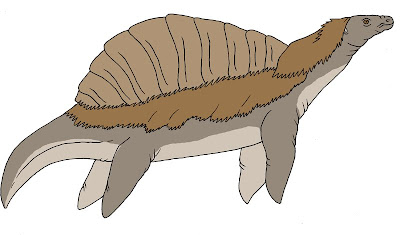 Image ©2010 ~Pristichampsus. Available.
If you look at the comments, note that none other than Nemo Ramjet suggests this cryptid looks like a potential long-lost relative of Thalassocnus. The aquatic nothrothere sloths occurred from the late Miocene to late Pliocene of southern Peru; the early basal species appear to have grazed on seaweed on or near land as evidenced by sand wear on their teeth, while the more derived species lack that wear and had an elongate rostrum, adaptation for strong lips, and appendicular morphology resembling that of pinnipeds (Muizon et al. 2004a, Muizon et al. 2004b, Muizon et al. 2003) Please read the excellent writeup at Catalogue of Organisms for further discussion on morphology and the possibility of anagenesis in that clade.
With all respect to Mr. Ramjet, I disagree with the assertion that the 'Type 5 Carapaced' marine cryptid represents a highly derived sloth. While some extinct sloths have bony ossicles, they appear restricted to the clade Mylodontidae (Delsuc et al. 2001 citing Carroll 1988); Thalassocnus is in the clade Megatheriidae. No members of Glyptodontidae are known to be semi-aquatic, but their extensive armor could provide a method of accomplishing negative buoyancy comparable to the pachyostosis of manatee bones.
While I can't find Champagne's original description of  'Type 5', I recall my nemesis the P/A Index playing a hand in its 'classification' - and of course it is worth noting that turtles are prone to growing hair-like epiphytic algae. No quills though.
Moving on... 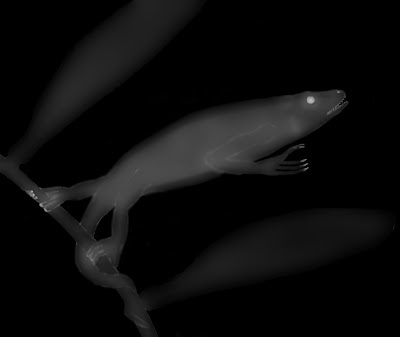 Champagne's 'Type 8 Digited' marine cryptid is likely based on poorly-reported frogfish, monkfish, or some other anglerfish species, although we can't be certain as he did not specify which reports constituted the 'type'. Here is Tim's take on the beast: 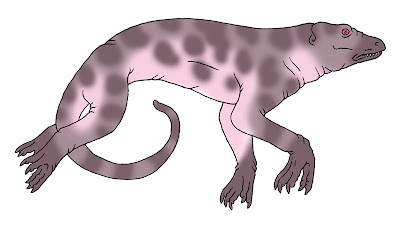 ©2010 ~Pristichampsus. Available.
How this creature is supposed to blend in with seaweed I have no idea. Anyways, rather than go with the seemingly obvious identification of an inexplicably aquatic chameleon, I'll spin the special Prehistoric Survivor Paradigm edition wheel of Phylogenetic Roulette (somebody remind me to physically construct this at some point) and land on drepanosaurs. I wrote about this group back in the primordial days of The Lord Geekington, but to avoid further humiliation I will instead link to the Hairy Museum of Natural History article. Note that drepanosaurs are found in lake-bottom sediments and were proposed to be aquatic at some points in their history, but it is now quite clear they are arboreal. I can't help but wonder if the idea of an aquatic chameleon-like animal heavily influenced this 'type', but it went without mention in the description.
I won't go through all the types here, so here's the link to the rest of the illustrations, and the sea-serpent-stravaganza that is the 'Know your Sea Serpents' amalgamation. It reminds me of this famous mural.
When I'm finished constructing my Random Taxa Wheel, I'll have to exploit the movie monster possibilities of these sea serpents...
References:
Carroll, R. (1988). Vertebrate Paleontology and Evolution. New York: Freeman.
Delsuc, Frederic, et al. (2001). The evolution of armadillos, anteaters and sloths depicted by nuclear and mitochondrial phylogenies: implications for the status of the enigmatic fossil Eurotamandua. Proceedings of the Royal Society B. 268, 1605-1615. Available.
Muizon, C. et al. (2004a). The evolution of feeding adaptations of the aquatic sloth Thalassocnus. Journal of Vertebrate Paleontology 24(2), 398-410. Available.
Muizon, C. et al. (2004b). The youngest species of the aquatic sloth Thalassocnus and a reassessment of the relationships of nothrothere sloths (Mammalia: Xenarthra). Journal of Vertebrate Paleontology 24(2), 387-397. Available.
Muizon, C. et al. (2003). A new early species of the aquatic sloth Thalassocnus (Mammalia: Xenarthra) from the Late Miocene of Peru. Journal of Vertebrate Paleontology 23(4), 886-894. Available.
Posted by Cameron McCormick at Sunday, February 14, 2010
Email ThisBlogThis!Share to TwitterShare to FacebookShare to Pinterest

Thanks muchly for featuring my art, Cameron :)

In response to the fact that the digited would have trouble blending in, I initially had it a mottled grey, but upon reading Champagne's description of "pink/red and brown" I changed the hue. So, blame him ;)

Thanks again, I'm redoubling my sea serpent efforts now, and drawing animals based on individual sightings and sketches, it opens up all sorts of crazy possibilities.

Whoops, I should have made it more clear that it was Champagne's description I was criticizing.

I distinctly remember the snorkeling glyptodont in Ice Age 2 The Meltdown. Haha. I thought 2 was a huge disappointment after the fun of the first Ice Age

Thanks for the post! I had never run across marine sloths before. Rather cool.

Not that it has anything to do with anything, but it just dawned on my that syngnathids and chameleonids are weirdly ecologically analogous in a very loose sense, in that both are highly cryptic ambush predators living in 3-dimensionally complex environments with novel feeding, locomotory and substrate attachment adaptations. Or maybe I'm just playing phylogenetic blackjack.

That dorsal fin is so hypnotic...

It took me a while to find this:
http://iceage.wikia.com/wiki/Stu

Hi Cameron,
I study Leptocephali, and I would like to ask you if you might know why so many of your totally unrelated images show up throughout the images that result from a google search for Leptocephali images. This is not good for people who may search this subject. Do you think this is something you are doing in how you label images or is this some kind of mistake in the google search engine. I would appreciate it if you would kindly consider this. Your blog seems like its cool, but it should not contaminate other searches so much. Try the google search and see for yourself. MJM

Google Images has a rather scatter-shot searching method which makes it difficult to find anything relevant for rare topics - I'd recommend using Bing instead.