The Incredible Size Variation of the Marine Iguana

No marine iguana (Amblyrhynchus cristatus) article would be complete without Charles Darwin's famous defamations against the reptiles, calling them "hideous", "disgusting clumsy Lizards", "imps of darkness"*, "stupid", and so forth (see his Journal of Researches). Despite these harsh sentiments, Darwin did not disown the reptiles during his visit, but made lasting observations on their biology. The laterally flattened tail and webbed feet are adaptations for a semi-aquatic habitat, one specimen demonstrated that the iguanas could survive being submerged for at least an hour; the strong claws of equal length are "admirably adapted" for grasping on to rocks**; instead of consuming fish (as some suspected earlier), the enlarged intestines and stomach contents suggested a diet wholly composed of marine algae; Darwin also suspected that they lacked land predators*** by repeatedly throwing an individual into a pool, only for it to continuously return to land! In The Voyage of the Beagle he observed that the iguana population at Albemarle Island was significantly larger than those on other islands; this remarkable variation is occasionally mentioned in marine iguana publications, but its significance is rarely discussed - hence this post.

* For some reason, the quote is rendered "I call them 'imps of darkness'..." or "someone calls..." in different publications.
** Darwin observed this function on the coast, but he apparently did not consider its function in marine browsing. It also seems unusual that he did not observe specimens consuming algae exposed by a low tide.

*** Galapagos Hawks have been known to hunt iguanas in groups and can take adult females (on Santa Fe the iguanas have compensated by using mockingbirds as sentinels); Great Blue Herons are major predators of hatchlings (Romero and Wikelski 2009). However, some island populations of marine iguanas are virtually not subjected to predation (see below). These days feral cats and dogs are causing trouble since marine iguanas have no way of recognizing these terrestrial predators as a threat (Romero and Wikelski 2009). 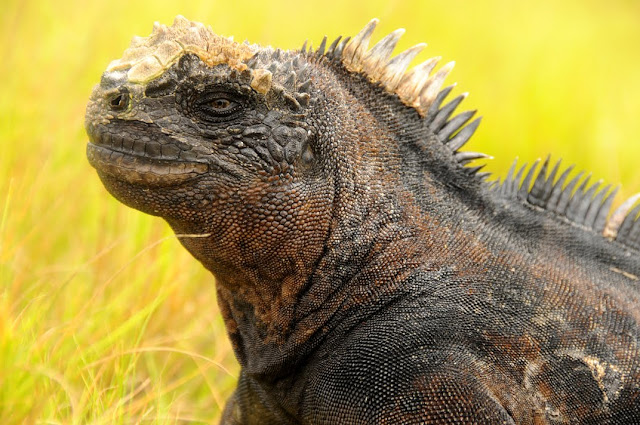 "Hideous?" I'd think "ruggedly handsome" would be a more apt description. Darwin described the iguanas as being "dirty black" (being dark aids in their thermoregulation), but as seen in this and other specimens, their coloration is actually highly variable. Also, what's with so many 19th century naturalists talking about reptiles in such disparaging terms?

Photo taken (and modified) from the Wikipedia Commons.

Before we get to the issue of size, some more background on the marine iguana is in order. Darwin considered the Galapagos land iguanas to be a second species within Amblyrhynchus; the land iguanas are now considered to be three species within Conolophus but molecular evidence has confirmed that they form the sister clade to the marine iguana (Gentile et al. 2009, Wiens and Hollingsworth 2000). Interestingly, the Galapagos iguanas appear to have diverged less than 10 million years ago, before the origin of the modern islands and implying that they inhabited other, now-submerged, islands in the vicinity (Rassmann et al. 1997). The (Amblyrhynchus + Conolophus) clade was formerly assumed to be related to chuckwallas (possibly due to long branch attraction and convergence), but now it is thought that they form a clade with spinytail iguanas - all of these clades occur around the central part of the Americas. (Wiens and Hollingsworth 2000). The MarineBio website has a fine summary of marine iguana biology - although their size figure could stand to use some revision.

A marine iguana goes for a swim - they locomote with their tails and hold their appendages flat against their body. Taken and modified from the Wikipedia Commons.

Wikipedia correctly mentions that the smallest iguanas are from Genovesa and the largest are from Fernandina and Isabela, although bizarrely the next paragraph simply states that males are 1.3 m long, females are 0.6 m in length, and the males weigh up to 1.5 kg (~3.3 lbs). Darwin's Journal of Researches mentions that specimens can reach 4 feet (1.2 m) in length and he gives a weight of 20 pounds (9 kg) for one large specimen. Romero and Wikelski (2009) comment that the Genovesa males are typically only 0.5 kg (~1 pound - about 0.9 kg/2 lbs max) in weight while the largest on Isabela can be over 10 kg. A photograph published by the authors (which I probably can't reproduce) shows an enormous 12 kg (26 pound) male with a very light coloration and huge amounts of tissue associated with the dorsal crest. I'm baffled as to how most popular sources have a maximum mass which is off by a factor of 8 - fortunately peer-reviewed sources do not make this mistake!


Size is a fundamental characteristic for organisms as it influences their morphology, physiology, behavior, and life history (Wikelski 2005). However, there are numerous and often interrelated factors which influence body size, so it is difficult to determine how the trait evolved - fortunately for me, Wikelski (2005) is a review paper on this subject for marine iguanas. The evolution of body size appears to have occurred rapidly in different marine iguana populations; Rassmann et al. (1997) determined through mitochondrial DNA that the iguanas on Fernandina and Genovesa form a "northern clade" (i.e., in the northern islands of the archipelago) despite their body sizes at the opposite end of the spectrum. Selective pressure through predation can be a very strong force, but since some marine iguana populations have virtually no predation and males are subjected to negligible predation on every island, this factor can effectively be ruled out (Wikelski 2005). Like the case for most organisms, there is a correlation between the size of the landmass and that of the organism (the larger Galapagos islands are also subjected to increased upwelling), however body size has historically increased on every island, apparently due to increasing temperatures (Wikelski 2005). While large males would seem to have a lot going for them - they have thermal inertia (useful for diving deeper than competitors), an increased ability to cling to rocks, and sexual preference from females (due to their ability to establish display areas) - during El Nino years the upwelling stops and while the iguanas can shrink (in body length, not just mass) to ameliorate the famine conditions, females have a 70-80% survival rate and large males have a survival rate of a mere 20-50% (Wikelski 2005).

Wikelski (2005) concluded that the most important influences on male marine iguana body size are sexual selection for larger size from females and natural selection. The natural selection is not limited to the famine conditions caused by the El Nino phenomenon, but also temperature variation and the amount of biomass. While large iguanas have more thermal inertia, they heat up more slowly which limits their ability to dive and digest; the amount of algae biomass does indeed appear to be influenced by the size of islands (Wikelski 2005). Wikelski (2005) theorized that the reason for large size, not just in iguanas but possibly many animals, is due to sexual selection which is of course countered by natural pressures mostly relating to the supply (and for some animals, physical size) of the food source. As for why sexual dimorphism occurs, this may be related to the resources females need to allocate towards reproducing - quantitative tests of this idea, however, have yet to be carried out (Wikelski 2005).

In the four years since Wikelski (2005), it does not appear that anyone has further elaborated upon the mechanisms controlling marine iguana body size. For those writing or revising articles on the species, please cease from implying that marine iguanas are homogeneous in size and at least mention the incredible variation!

A pretty good video from the BBC. As Wikelski (2005) speculates, when the iguanas first arrived on the Galapagos there would have been very limited food on land, forcing them to forage for intertidal algae. The North Seymour population supplements their diet with land plants, so presumably the land iguana species is derived from a marine population which specialized even further.

Posted by Cameron McCormick at Saturday, November 28, 2009
Email ThisBlogThis!Share to TwitterShare to FacebookShare to Pinterest

Large marine iguanas have post-dive sneezing while sunbathing, to remove swallowed salt, the briny salt accumulates on their crests, perhaps keeping the brain cool while the torso heats up.

Lots of Wikipedia articles have odd or misleading size data for animals. I was reading their entry on Homo ergaster yesterday, and it blithely says it stood 1.9 m tall which no indication whether this is supposed to be an average, a maximum, or what. One'd think close relationship to ourselves would help remind people that size shows intraspecific variation but apparently not.

Yikes, the size table for the Homo species is a complete mess. Let's see...

Using a decimal system with feet as a unit of measurement is potentially confusing.

They make no mention of sexual dimorphism.

And as you mentioned, it isn't clear if the sizes are averages or maximums (it seems to be a mix of both).


Thank goodness I'm not the only one troubled by this, you'd think taking these things into consideration would be a given.

Exceilent blog you have here but I was curious abou t if you knew of any communi ty forums tha t cover the same topics talked about in this article? I’d really like to be a part of online community where I can get advice from other experienced individuaIs that share the same interest. If you have any suggestions, please let me know. Appreciate it....

I was about to say something on this topic. But now i can see that everything on this topic is very amazing and mind blowing, so i have nothing to say here. I am just going through all the topics and being appreciated. Thanks for sharing..

Excellent blog you have here but I was curious about if you knew of any community forums that cover the same topics talked about in this article? I’d really like to be a part of online community where I can get advice from other experienced individuals that share the same interest. If you have any suggestions, please let me know. Appreciate it softtonice | canon support | drivers and software

Hello, i'm Toko Glucoberry !! Thank you very much for sharing this information that very very helpful and very useful Obat Flu Singapura Obat Encephalitis
I feel strongly about it and love learning more on this topic. If possible, as you gain expertise, would you mind updating your blog with more information?
Cara Mengatasi Demensia Obat Degenerasi Makula

I'm sure this a person's a fantastic spot to spend our holidays with my loved ones. I would possibly think of this as Australia's Cheapest Online Supplements one particular. Appreciate You cambridge mortgage brokers