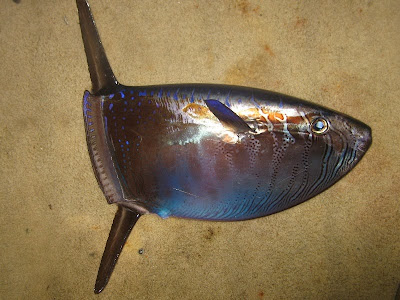 Not to be confused with the plant genus of the same name.
Photograph from Wikipedia
Poor neglected Ranzania, how has it been over a month since I've last discussed molids? Now that I've hit a clear patch with projects and activities, I'll finally be able to complete that last, nagging chapter on molids.
Had I been aware from the outset, I would have made Ranzania the subject of the first chapter; this taxa lacks many of the traits which define (Mola + Masturus) and, I suppose, could be regarded as a 'transitional form' between other tetraodontiformes and derived molids. I use that term cautiously because Ranzania isn't some unmodified holdover from the last common ancestor of molids - nothing is a true 'living fossil' or 'missing link', but basal members of a clade can still be useful for inferring evolution.
It deserves a mention that Raven (1939) thought that Ranzania was the most specialized of the molids based on the extreme development of the erector and depressor muscles of the dorsal and anal fins (see below) - this seems strange because the author recognizes several 'primitive' characters present in Ranzania including inclinator muscles for the aforementioned fins and the vestige of the puffing apparatus (m. retractor postclavicularis). These days phylogeny is no longer determined from a single character; the character-taxon matrix from Gregorova et al. (2009) has 57 characters and includes the extant molids (Ranzania, Masturus, Mola), the extinct ones (Austromola) and non-molid tetraodontiformes (Triodon, Lagocephalus), the latter of which is the most basal member of the clade and the former of which is in the sister group to molids. Ranzania has one unique character* state (pseudocaudal fin rays branch >5 times) in this analysis and shares 32 characters exclusively with other molids (but not always all of them); on the flip side Ranzania has 19 characters states present in non-molid tetraodontiformes such as an elongate pectoral fin, a body depth two times longer than deep, an absent 'carapace' (thick layer of collagenous tissue under scales), gill rakers not concealed in thick layers of skin, no secondary post-metamorphosis, and densely ossified bone (as opposed to weakly ossified and spongy) (Gregorova et al. 2009). Oh yes, and molecular evidence agrees that Ranzania is the most basal molid (Bass et al. 2005).
* Ranzania also has a vertical mouth slit, an unique apomorphy as far as I can tell. Molids lack muscles capable of closing this structure (Raven 1939). 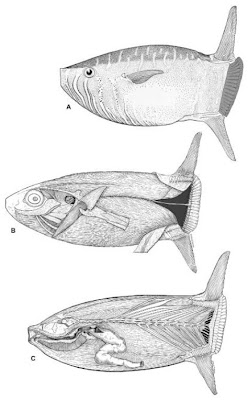 External, musculature, and skeletal morphology of Ranzania. Taken from Johnson and Britz (2005) - itself modified from Fraser-Brunner (1951) and Raven (1939). In 'B', note that the entire lateral muscular mass is composed of muscles controlling the dorsal and anal fins - this is a singularly extreme development, even amongst molids. Juveniles have a slimmer body and evenly-sized dorsal and anal lateralis muscles, adults (pictured) have a thicker body due to more developed anal lateralis muscles (Raven 1939). Fishbase mentions that there are two more anal fin rays than dorsal. These aren't traits we would expect from an underwater 'flier', however Robison (1975) mentions that Ranzania is negatively buoyant and sinks head-first - is this morphology due to stabilization needs?
Morphological oddities, and lack thereof, aside, Ranzania also appears to occupy an unusual niche for a molid. Juveniles eat planktonic crustaceans such as calanoid and cyclopoid copepods, ostracods, and amphipods (Robison 1975) and adults also reportedly consume small crustaceans in addition to lanternfish, hyperiid amphipods, crab larvae (megalops and zoae), and pteropods (OceanSunfish.org citing Fitch 1969). The other, larger molids (Ranzania reportedly only reaches 1 m in length) are famous for consuming jellyfish in bulk, although they will consume a variety of prey including bottom dwelling and deep water species (OceanSunfish again for the save). This abstract suggests that the range of Mola is influenced by temperature while the range of Ranzania is influenced by productivity of zooplankton and small fish, itself influenced by large-scale atmospheric conditions; Castro and Ramos (2002) found captures of Ranzania to coincide with a warming process of the sea surface although if I had access to the former study I'm sure they'd discuss this.
Although typically stated to be a tropical to subtropical species (e.g. Castro and Ramos 2002), Ranzania can occur up to 71 degrees north (Castro and Ramos 2002 mention its occurrence in Scandinavia, huh) and Fishbase accurately describes the species as cosmopolitan. The only extant recognized species is R. laevis, but considering the vast range it would not be surprising if a study of population genetics turned up distinct clades possibly worthy of species-status. Fossil Ranzania species have been reported from the Middle to Late Miocene (see Gregorova et al. 2009 for a review) but I am cautious of species assigned to the clade solely on the basis of polygonal scale plates. Molecular estimations of molid divergence suggest that the Ranzania lineage diverged between 17.6-52.1 mya (Early Miocene to Early Miocene), which supports the assignment of the aforementioned fossils to Ranzania.
I think that about does it for Ranzania and the other molids. But not for weird fish...
References:
Bass, Anna L., et al. (2005). Evolutionary divergence among lineages of the ocean sunfish family, Molidae (Tetraodontiformes). Marine Biology 148, 405-414.
Castro, J. J. and Ramos, A. G. (2002). The occurrence of Ranzania laevis off the Island of GranCanaria, the Canary Islands, related to sea warming. Journal of Fish Biology 60, 271-273.
Gregorova, Ruzena, et al. (2009). A Giant Early Miocene Sunfish from the North Alpine Foreland Basin (Austria) and its Implication for Molid Phylogeny. Journal of Vertebrate Paleontology 29, 359-371.
Johnson, G. David, and Britz, Ralf. (2005). Leis’ Conundrum: Homology of the Clavus of the Ocean Sunfishes. 2. Ontogeny of the Median Fins and Axial Skeleton of Ranzania laevis (Teleostei, Tetraodontiformes, Molidae).
Raven, Henry C. (1939). Notes on the Anatomy of Ranzania truncata. Am Mus Novitates 1038, 1-7.
Robison, Bruce H. (1975). Observations on Living Juvenile Specimens of the Slender Mola, Ranzania laevis (Pisces, Molidae). Pacific Science 29, 27-29. Available.
Posted by Cameron McCormick at Tuesday, September 22, 2009
Email ThisBlogThis!Share to TwitterShare to FacebookShare to Pinterest

I saw a mola at Sea World Japan, I didn't know the flesh was jellylike with sponge bones. Dense bones in Ranzania, head held lower than body, sounds odd. Interesting.

Thankfulness to my father who told me on the topic of this web site, this
blog is really remarkable. Penyebab Serta Gejala Pembesaran Prostat
I’ve been surfing online more thаn 4 hours today, yet I never found any interesting article like yours. it is pretty worth enough for me. Obat Cacar Air (Varisela) Tradisional Terbaik
In my view, if all web owners and bloggers made good content as you did, the net will be much more useful that ever before.
Obat Herbal Presbiopi (Mata Tua) Obat Herbal Diabetes Melitus