Elopomorpha is a diverse group of basal teleost orders united by a leaf-like larval form known as a leptocephalus; members include the tarpons and relatives (Elopiformes), bonefish (Albuliformes), halosaurs and spiny eels* (Notacanthiformes), true eels (Anguilliformes), and the gulper eels and relatives (Saccopharyngiformes) (Inoue et al. 2004). Inoue et al. (2004) finally corroborated the monophyly of Elopomorpha with character matrices and determined this phylogeny:
*Halosaurs and spiny eels have been placed in order Albuliformes by Inoue et al. (2004). 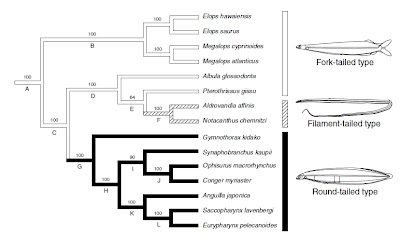 Leptocephali are not normally very large, typically some 2-4 inches (50-100 mm) in length, so specimens substantially larger than this certainly raise eyebrows. The most commonly mentioned giant leptocephali were those collected by the Dana, the largest of which measured around 1800 mm (Castle 1959, citing Bertin 1954). Unfortunately, I have not found any information on these specimens aside from the length of the one individual and the number of myomeres (450*); their current whereabouts appear to be unknown. The ambiguity of this report has not stopped some cryptozoologists (e.g. Heuvelmans) from assuming that the larvae were true eels** with Anguilla-like growth (45 mm leptocephalus to a 800 mm adult) and a ~30 m adult size! Castle (1959) pointed out that Nemichthys scolopaceus has a larvae up to 253 mm in length and a growth rate which would turn a 1.8 m larvae into a 2.7-5.4 m adult. As we'll see, it's not entirely out of the question for the 1.8 m larvae to have an adult length shorter than that of the larvae.

*The number of myomeres apparently led Bertin to think that the larvae were members of Nemichthys (Castle 1959).

** Castle (1959) seems to synonymize "leptocephalid" with "eel larvae", so apparently he was unaware of the larval stage occuring in several other orders. Elopomorpha was established in 1966 on the basis of leptocephalus larvae (Inoue et al. 2004), and it seems improbable that four leptocephalus-adult relationships were worked out in 7 years. Heuvelmans, writing in 1968, certainly should have known.


Leptocephalus giganteus was first described by Castle (1959) on the basis of a 893 mm leptocephalus caught in shallow water off South Westland, New Zealand. The larvae was extremely attenuated with an 18.1 mm head, pre-vent length of 883 mm, depth of 18 mm, and 466-486 myomeres (Castle 1959). Castle (1959) suggests that characteristics such as the lack of fin rays, lack of cranial and pectoral development, V-shaped myomeres, and a subterminal vent indicate that this larvae is not a pathological giant and has not yet reached its full growth. He concluded that there's a giant bathypelagic eel living off the coast of New Zealand...

Another L. giganteus from S. Africa was described in 1967 and two more were reportedly found in an Alepisaurus* stomach, but it wasn't until Smith (1970) that an incredibly important feature was recognized. True eels never have pelvic fins at any of their life stages and sure enough, Smith (1970) noticed barely visible pelvic fins at the 34th myomere of his large individual. Coupled with the short-based dorsal fin, L. giganteus was recognized as a notacanthiform (Smith 1970). Interestingly, this excerpt from Early Stages of Fishes in the Western North Atlantic puts the maximum length of L. giganteus at 1840 mm (or 2 m), awfully close to the reported length of the largest 1930 Dana specimen. Are there reasons for thinking that the Dana specimens are L. giganteus aside from the length and myomere count (300-486 in L. giganteus, 450 in Dana)? Even more curiously, the book cites a source which suggests that L. giganteus may be a synonym for Notacanthus chemnitzi; are size and a widespread distribution the reasons for thinking this? I found a Moser and Charter (1996), but it did not have any unique information on L. giganteus...

*What's with all these fish having a suffix that means "lizard"?


Giant leptocephali appear to have been known since 1810 (from Rafinesque) and these unusual elongated larvae were eventually placed in the "genera"/categories Tilurus and "Tiluropsis"* by Roule (Smith 1970). While L. giganteus has an elongated head and round eyes, Tilurus can be distinguished by its short head and round eyes and "Tiluropsis" has a short head with vertically elongated eyes (Smith 1970). "Tiluropsis"-type larvae were recently captured in Brazilian waters, giving the authors an opportunity to discuss how prior workers tenuously connected the larvae to the halosaur Aldrovandia gracilis; the two have similar branchiostegal and pectoral ray counts and overlapping distributions, but the authors feel that much work is needed to clear up the life cycle of the enigmatic larvae. The book excerpt suggests that Tilurus belongs to the other notacanthiform subgroup, Notacanthidae.


With the advent of molecular data, if someone manages to get hold of giant leptocephalus and notacanthiform tissues they could theoretically resolve the mysteries surrounding the larvae. Do the larvae shrink in size at transformation? How many species compose each of the leptocephalus types? Do all notacanthiform larvae have this elongated shape? Although I'm somewhat doubtful that any of these will turn out to be a 30 m eel, it should still be a fascinating study nonetheless...

Inoue, Jun G. et al. 2004. Mitogenomic evidence for the monophyly of elopomorph fishes (Teleostei) and the evolutionary origin of the leptocephalus larvae. Molecular Phylogenetics and Evolution 32, 274-286.

Thanks for information on a subject that's fascinated me since childhood. I've been following your blog for a while now and have taken great pleasure in it -- the debunking and fact-oriented approach is delightful.

I love watching someone rain on a charade.

I am very happy because they can find information about this excellent, This is one of information that has long was I was looking for, I hope you continue to update the latest information more definitely still associated with it, Maybe I'll come back again to visit here to find other interesting information, Thank you so much because you have been willing to share it all, And this course I will inform all my friends to the same'm looking for this information ..