If this topic looks familiar, that's because it was covered back in 2007. Since those dark ages, much more information has become available and I realized a reboot was in order. Looking back at that old page was like watching Batman & Robin after Batman Begins.

So what is an "octopod"? For this post, I will consider an "octopod" to be everything more closely related to Octopus than Vampyroteuthis; this includes the cirrate and incirrate octopuses in Octopoda plus whatever stem-octopods are out there. Unfortunately, there is little consistency in the naming of major cephalopod taxonomic rankings in some recent literature. Mikko's phylogeny calls the order "Octopoida", but still refers to the animals as "octopods" instead of "octopoids". Fuchs et al. (2008) calls the order Octobrachia, the suborder containing incirrates Octopoda, and the suborder containing cirrates Cirroctopoda. The systematics used by Tanabe et al. (2008) have a superorder Octobrachia containing the orders Cirroctopodida, Octopodida, and Vampyromorphida. Young and Vecchione (2008) argue that cirrates and incirrates are well-supported sister taxa and this reorganization is not valid. So I'll stick with the more traditional naming scheme, but we'll see how this holds up with the re-reboot in a couple years.

Early cephalopod evolution was apparently rife with "morphological plasticity"; Carboniferous coleoid shells exhibited character recombinations not observed in Mesozoic individuals and previously thought to be impossible (Doguzhaeva et al. 2007). Assuming that this phenomenon effected parts of the cephalopod aside from the shell, caution should be used when assigning very early coleoids to groups.

An upper Carboniferous fossil from the Mazon Creek Lagerstätte of Illinois, this "exceptionally well preserved" fossil in ventral view is interpreted to have a sub-circular and dorso-ventrally flattened sac-like body; two narrow posterior fins with a narrow, symmetric shape; a head indistinct from the body with mandibular architecture, eyes, and a funnel; an arm crown which is indistinct with no hooks or suckers visible, there appear to be short arms and long modified arms (tentacles) (Kluessendorf and Doyle 2000). 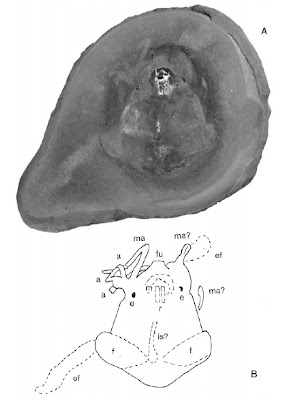 Kluessendorf and Doyle (2000) modify another author's figure to show Pohlsepia on the stem-line leading to the Vampyromorpha/Octopoda clade (text-fig 2); bizarrely they regard it as a possible member of Cirrata (= Cirroctopoda) - a group which the figure shows deriving more than a couple hundred million years after Pohlsepia. Since Pohlsepia reportedly lacks a shell, the authors compare it to octopods (cirrates and incirrates) which "lack any form of shell" - this is not true as shells are present in cirrates in the form of cartilaginous fin supports and in some incirrates as stylets. The presence of fins indicates that a shell-like structure must be present as a site of muscle attachment, so clearly either this fossil was not interpreted correctly or not everything fossilized. Klug et al. (2005) call this a poorly preserved fossil and suggest that the structures interpreted as fins could very well be the remnants of an internal shell. Considering the eight arms, two tentacles, dorso-ventral compression and possible shell remnant, could this be a decapodiform that was deformed (squished) during fossilization? Additional specimens will be needed to clear up all of these ambiguities since right now the absence of hard parts is viewed as a diagenetic artifact and Pohlsepia is ignored in phylogenetic analyses (Fuchs et al. 2008).

Very little literature on this species is available to me, but it is fortunately discussed by Fuchs et al. (2008). This mid-Jurassic coleoid has been viewed as an incirrate octopod by some, but its lack of a gladius us probably due to the deposit it was found in (where no gladii have preserved) (Fuchs et al. 2008). The presence of a pair of fins strongly supports the notion that the gladius failed to preserve. It is possible that the lack of cirri on the fossil is also an artifact of preservation (Fuchs et al. 2008). This article notes that the species has a sac-like body, two fins, eight equal arms and no indication of a modified appendage pair - but is it a stem-octopod? Fuchs et al. (2008) suggest that it could be a stem-line member of either "Octobrachia" (=Octopoda) or Vampyromorpha, since it has a vampyromorph-like body outline. 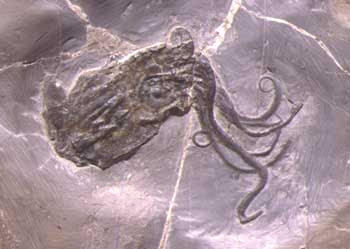 I mentioned the peculiar coleoid Trachyteuthis hastiformis in a previous post - although not the one on fossil octopods. Although trachyteuthids have been assigned to a number of groups, the presence of two pairs of fins, eight arms, cirri, arm webbing, and the absence of a phragmocone has led to classification as a vampyromorph (Fuchs and Schultze 2008). However, the beak morphology bears a stronger resemblance to Octopus than Vampyroteuthis (Klug et al. 2005). Klug et al. (2005) note that beak morphology is not the most important character in coleoid phylogeny and suggest that more beaks from vampyromorphs will be needed to determine if other members of the group could exhibit Octopus-like beak morphology. Interestingly, Fuchs and Schultze (2008) place Trachyteuthis in the order Octobrachia (= Octopoda) and the suborder Teudopseina; they cited obscure sources which claimed that the gladius remnants of cirrate and incirrates derived from a teudopseid gladius. If this classification is correct (and it will certainly be debated in the future, then Trachyteuthis, Teudopsis, Glyphiteuthis and relatives are stem-octopods. 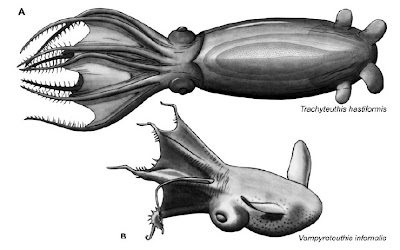 From Klug et al. (2005). This reconstruction presumes a close relation with Vampyroteuthis, although if Trachyteuthis is an octopod I doubt it looked much different. This looks a lot better than my effort.

A group I forgot to add when I originally published this post, loligosepiids are another family of coleoids currently classified as vampyromorphs which may have octopod affinities. I unfortunately can't access this paper to give more of a background, but newly described octopod species hint that they may be derived from this family and not Teudopsidae (Fuchs et al. 2009). It is possible that loligosepiids are members of both the Octopoda and Vampyromorpha stem groups (Fuchs et al. 2009).

That's it for now, part 2 tomorrow will cover fossils that are without a doubt actual octopods.

Posted by Cameron McCormick at Monday, February 09, 2009
Email ThisBlogThis!Share to TwitterShare to FacebookShare to Pinterest