Does the Hero Shrew have a Functional Analogue?

Scutisorex somereni* (or the hero/armored shrew) is a member of the order Soricomorpha and family Crocidurinae which has derived vertebrae morphology quite unlike even its close relatives** (Allen 1917). The book Axial Character Seriation in Mammals by Aaron G. Filler (p. 65) proclaims that these vertebrae represent the most bizarre and unusual axial morphology from an amniote and the Culliane et al. 1998./Culliane and Aleper 1998 papers cite East African Mammals II by J. Kingdon who is of the opinion that the spinal morphology is probably the most derived among vertebrates. Statements like this made a blog post all but inevitable, but there was at least one fascinating claim I wasn't aware of. Darren Naish's post on his dead mole and a post on Emile's blog alerted me to the North American Upper Oligocene hedgehog Proterix (order Erinaceomorpha) which may have some similarities with Scutisorex.
* S. somereni = S. congicus. The former was erroneously thought to be a distinct species by Allen 1917.
** There is a chance that the hero shrew is a member of Sylvisorex. 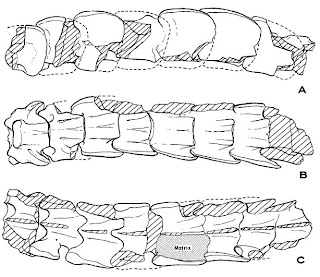 From Fig. 6 of Gawne 1968. These appear to be lumbar vertebrae (there is no indication of ribs) arranged so the anterior-most one is on the left. A is lateral, B is ventral and C is dorsal.

The massive vertebrae of the Proterix species (P. loomisi and P. bicuspis) have their sides covered by large vertical plates which extend above and below the body of the vertebrae and overlap posteriorly (Gawne 1968). It doesn't seem clear in the illustration but the spines extend about 3 mm above the plates (Gawne 1968). The vertebrae allow for free vertical movement but the plates allow for very little lateral movement and twisting (Gawne 1968). Emile's blog informs us about Dougal Dixon's portrayal of Proterix as a mole-like animal with compressed and reinforced vertebrae as an adaptation for burrowing*, plating on the head and, oh, limblessness. Gawne doesn't mention any of this and since her paper is the most recent that I'm aware of, where is this information coming from? Skulls and teeth (and in this case, massive vertebrae) fossilize readily thanks to their density and it needs to be said that Proterix also lacks fossilized cervical and dorsal vertebrae; absence of fossilization in such incomplete specimens cannot be taken as evidence of actual absence. Maybe there are informally undescribed Proterix specimens out there which show vestigial limb bones and conform to Dixon's portrayal, but until they're formally published I will continue to regard the limb morphology and lifestyle of Proterix as an open question.


That aside, why did Gawne think that Proterix was similar to Scutisorex? Similarities are not obvious in a superficial comparison: 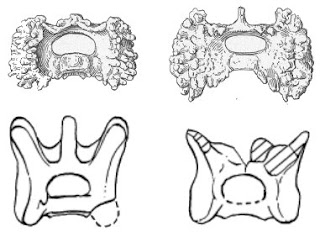 Asking why Gawne though the vertebrae were similar is also a question to myself, she never makes it terribly clear. Functionally, she interprets that the vertebrae of Proterix will allow for free vertical motion but lateral movement and twisting will be restricted. Filler's book notes that while Scutisorex can have more than one hundred processes (!) on some lumbars, few of these articulate and the hero shrew has free lateral and dorsal movement. However, Filler notes that the shape of the vertebrae allows for little rotation along the long axis of the column, i.e. twisting. Culliane et al. 1998 suggest that the spinal morphology resists large internally generated loads and compressive forces during flexion, bending and torsion but the circumstances of needing this are not obvious. While the spine of Scutisorex may be a sort of morphological "breakthrough" with unique functional circumstances (Culliane et al. 1998) perhaps the rotationally restricted spine of Proterix is a sort of alternate "low tech" analogue. Levels of lateral flexion may be the result of the differing methods to resist torsion but it could also indicate that Proterix and Scutisorex aren't quite functional analogues. Gawne 1968 also mentions that Scutisorex and Proterix both have expanded mastoids, a strong posterior lambdoid crest and roughening of the skull roof - these appear to be related to a strong bite in both animals. There's always the chance that Proterix really is some weird-ass limbless mammalian mole that evolved torsion resistance and a strong bite for some completely different reasons than Scutisorex, but I wouldn't bet on it.


So exactly what functional circumstances does Scutisorex put itself in? There is the possibility that the hero shrew's spinal morphology evolved with no related behaviors or ecology, suggesting that "complex morphologies can evolve without selection driving their adaptive trajectory" (Culliane and Bertram 2000). I really can't wrap my head around an animal with a spine 7 standard deviations more massive than predicted for its size (Culliane et al. 1998) obtaining it with no selection - the relative energy put into building up such a structure must be phenomenal. Culliane and Bertram 2000 sort-of indicate that the spinal morphology could be related to the general problem of torsion injury; selection is of course involved but unique behaviors and ecological niches may not be. The limited sample size of Churchfield et al. 2007 showed that Scutisorex was a partially subterranean opportunist with a preference for earthworms - this doesn't exactly set it apart from other shrews and can't explain the anatomical adaptations. Oddly, one of Darren Naish's posts stated that hero shrews exploit aquatic environments and on my previous hero shrew post it was suggested that their spinal morphology may be related to levering up stones. The appendicular skeleton of the hero shrew is not adapted for load bearing (Culliane et al. 1998) which I think would be quite problematic for a shrew trying to lever something up.

Absence of evidence for a unique niche isn't of course proof of its absence in such a poorly known animal and claims of unique stone prying behavior need to be addressed. Hopefully with further understanding of Scutisorex it can be determined if Proterix was trying to do something similar. Who knows, maybe more fossil skeletons of "large" (~20 cm) insectivorous mammals will show up with different methods of reducing torsion. And then there's whole witnessing major structural changes thing.

Hi Cameron. Good work as always. I know that the 'Scutisorex is semiaquatic' idea I mentioned is rarely seen, but I felt duty-bound to mention it given its discussion by Kerbis Peterhans & Patterson (1995). Apparently, Scutisorex forages in streams and other aquatic habitats.

As for the alleged limblessness of Proterix, having spoken about this with Dougal Dixon (the source of the limblessness claim), I'm no closer to finding a reference that demonstrates this. Dougal recalls seeing it being discussed in an old article, but couldn't find it in the papers he checked. Nor could I. It may be worth asking Gina Gould or someone else who works on fossil hedgehogs.

It seems brilliant phrase to me is

There was a time in my youth when I felt immortal.

I was strong. Healthy. Full of life.

Every day I'd wake up, bursting with energy. Feeling unstoppable.

I'd go out and exercise full out. Or put in a long day at work. Or go on a weekend adventure with friends to the mountains.

And at the end of the day? I'd still feel REALLY good.

Tired, but in a good, relaxing, "hit the sack" kinda way.

Until one day, it happened.

I was getting out of the car and for some reason, I twisted my back.

It immediately seized up. Hunched over with hand on my hip, my muscles spasmed as if to protect it.

The pain was sharp. Deep. Crippling.

That was a day I'll never forget. That was the day I realized... I was human.

Getting out of the car was something I'd done a thousand times before. Why did it happen THAT day, I wondered?

I've replayed it a thousand times in my head, but I'll never know.

What I do know is that day set off a chain reaction of events.

Over the years, more unexpected bouts of pain. Days and even weeks off work.

While I was experiencing my most recent painful bout, one of my business partners took pity and shared with me a wonderful natural method that not only relieves back pain in less than 20 minutes, but there's a strong likelihood you'll never have to deal with it again.

I tried it and amazingly, it worked! Within just a few minutes, my back magically "unlocked." The relief was like a warm south Pacific wave, relaxing every muscle in my body.

After wasting thousands of dollars on useless remedies, days and weeks off work, I was FINALLY FREE from pain.

I'll be honest. As I've grown older, my experience with back pain has humbled me. When I look at it the right way, maybe it WAS a good thing, because I no longer take my health and body for granted.

But the great thing is I'm back doing the things I love. Without giving second thought to whether my back will "go out." With this unique method, it's been months since I've experienced even the smallest inkling of pain...

All I can say I wish I'd know about this method sooner. But I thank my lucky stars I found it when I did.