As this post indicates, oscars (Astronotus ocellatus) are held in fairly high regard by me, banner-worthy in fact. I've owned two as pets (thus far) and I have fond memories of them eating a Siamese fighting fish, breaking heaters, flopping around outside the tank, getting scared by earthworms and so forth. Having owned goldfish previously, I was amazed that fish could be so active, intelligent and destructive. 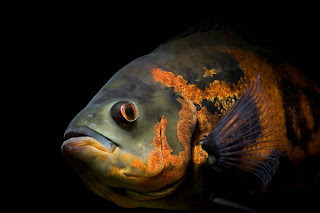 A. ocellatus from the Wikipedia commons

A. ocellatus is a member of the enormous family Cichlidae and is a member of the Neotropical radiation comprising over 407 species (Musilova et al. 2008). The subfamily Astronotinae is regarded as being a sister group to most of the Neotropical radiation (Lopez-Fernandez et al. 2005) and is composed of only three genera. Unfortunately, it doesn't seem that any species aside from A. ocellatus is very well known. Chaetobranchus consists of two species specialized for planktivory; C. semifasciatus has a superficially oscar-like appearance and coloration but specimens attributed to C. flavescens look remarkably different (see here). The Guide to South American Cichlidae notes particular resemblance to the genus Acaronia, a member of a different (and more derived) subfamily. I can't help but wonder if Chaetobranchus is paraphyletic or if C. flavescens reverted to a more ancestral coloration and body shape. Chaetobranchopsis is a closely related genus with two species that are even more rarely discussed. Fishbase indicates that C. australis is non-predatory and likely and micro- and planktophagous feeder and C. orbicularis is probably a filter feeder. Unfortunately, I can't talk much more about these species without rampant speculation.

Then there's the other oscar A. crassipinnis which is mainly distinguished by an overall darker coloration, different position of light and dark bars and different scale and fin ray count. Kullander mentions that the syntypes are either from A. ocellatus or some other species. Astronotus ocellatus is distinguished by having multiple ocelli near the dorsal and caudal fin, although this feature does not show up in every specimen (A. crassipinnis and C. semifasciatus also have a single ocelli) and is believed to be anomalous (Winemiller 1990). Since oscars and similar relatives are large, slow-moving fish they have large fins and the ocelli appear to be an eye mimic that dissuades fin-nipping piranhas from feeding on them (Winemiller 1990).

I recall one instance of a broken heater raised the temperature in an aquarium to perilous levels and forced one of my oscars to attempt breathing air. Astronotus ocellatus is actually one of the most hypoxia tolerant fish in the Amazon, capable of tolerating 6 hours of anoxia at 28 degrees C (82 F) (Almeida-Val et al. 2000). Chippari-Gomes et al. studied A. crassipinnis (and another cichlid less hypoxia tolerant) and noted that higher glycogen concentration in the liver and muscles were partially responsible for maintaining metabolism in very low oxygen. Almeida-Val et al. discovered that while smaller fish are typically better at dealing with hypoxia, the anaerobic potential of oscars actually increases with growth. Sloman et al. 2006 investigated the matter further and noted that the younger animals tended to stay in oxygen deficient waters longer than the adults, likely since they would be more vulnerable to predators on the water surface. Smaller individuals will also remain fairly active in hypoxic waters (likely searching for areas with higher oxygen levels) whereas larger individuals will limit their activities to suppress their metabolism - although aggression levels are not affected until very low oxygen levels (this is also rather atypical). Chippari-Gomez et al. theorize that the hypoxia tolerance of A. crassipinnis allows it to exploit a larger ecological scope than other species (this is undoubtedly applies to A. ocellatus as well); Sloman et al. point out the little is known about the distribution of the fish in the wild and that the ecological context of their remarkable hypoxia and anoxia tolerance needs investigating.


There's a great deal of information on the web about Astronotus ocellatus: ADW is always a good source, Fishbase is a must and there's even a forum.


My lack of output thus far was due to me getting rather tied up on some very long posts which should hopefully make it out sometime this summer. Stay tuned...

Sloman, Katherine A. et al. 2006. Tribute to R. G. Boutilier: The effect of size on the physiological and behavioural responses of oscar, Astronotus ocellatus, to hypoxia. The Journal of Experimental Biology 209, 1197-1205

Winemiller, Kirk O. 1990. Caudal Eyespots as Deterrents against Fin Predation in the Neoptropical Cichlid Astronotus ocellatus. Copeia, Vol. 1990, No. 3, pp. 665-673
Posted by Cameron McCormick at Saturday, May 24, 2008
Email ThisBlogThis!Share to TwitterShare to FacebookShare to Pinterest

In Neal Pronek's "Oscars" (TFH Publications, 1982) there's a photo by one Klaus Paysan with the caption "An adult oscar of the regular color pattern." The fish in question is predominantly a chalky-green in color, with splotches of darker green and yellow interspersed with patchy black striations and speckled rust-colored scales. The base of the pectoral fin is light blue, whereas the ocellus is small and rimmed in yellow. Whether this is A) a hand-tinting job gone terribly awry (one recalls the color drawing accompanying Cuvier's description), B) a representative from an unusual wild population, or C) another species altogether is unknown to me.

We certainly can't rule out that this is a unique population, I'm sure future phylogenetic examinations will reveal several, but it looks like most of this coloration is an artifact. On page 32 that A. crassipinnis seem to have a similarly shifted color scheme, but Paysan's fish has the conventional A. ocellatus pattern of dark blotches so I'm guessing that water color is causing this effect. When my oscar was scared (by big earthworms, playing cards, etc.) I recall that he could lighten his already light blotches of coloration and turn somewhat gray/green, and judging by the amount of contrast it seems Paysan's fish is doing the same. The ocellus is weird looking but it is somewhat similar to those on some "red oscar" color morphs and I guess it's within reasonable variation. I can't be sure of all this of course