Are there limits to terrestrial mammals?

Body mass can provide critical information about species, from function to behavior to ecology (Reynolds 2002). Megafauna is frequently a subject of this blog, although a lot of it occurred early on and I don't feel that it covered the implications of large size very well. Just exactly how some species managed to function boggles the mind. "Mega-sauropods" were undoubtedly the largest terrestrial animals of all time with species such as Argentinosaurus and Puertasaurus apparently approaching 100 tons and others possibly exceeding it...I'm not getting into this but you can read about it here and here. Despite already being exceedingly large, the size of some megafaunal species are often exaggerated. Earlier in the blog I mentioned how the bear Arctodus simus was treated as if the weight of a hypothetically outsized male was average (this is obviously wrong visually) - and it was possibly made into a much more predatory animal. Reynolds 2002 cut the "black bear-sized beaver" Castoroides* down to 60-100 kg since previous estimates were based on a proportionally large skull (his used femurs). Reynolds noted that the femoral size of Castoroides was not much larger than a capybara - demonstrating how comparisons with species that aren't too closely related can be valuable for a rough comparison.
* This is some of the most preposterous exaggeration I have ever seen. Castoroides had a head/body length of 1.5 m (~5 feet). The living beaver Castor is 80-90 cm average and weighs 15-20 kg. Reynolds uses this obvious but hitherto overlooked comparison to get a figure of 52-60 kg, which would have tipped off earlier workers that something was very wrong with their estimate. 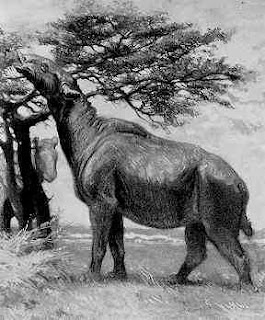 Paraceratherium (= Baluchitherium) in a copyright expired appearance. It looks fairly correct.
Indricotheres are hornless stem-rhinoceroses in the subfamily Indricotheriinae, family Hyracodontidae and superfamily Rhinocerotoidea and are now (mostly) regarded as having only the genus Paraceratherium (Antoine et al. 2008). The indricotheres are widely cited as being the largest land mammals of all time (Antoine et al. 2008) although this is not a very supportable contention (Fortelius and Kappelman 1993). It was called the world's largest land mammal while being introduced to the public and was later estimated at 20 or even 30+ tons (Fortelius and Kappelman 1993), a tonnage considerable for a sauropod. The original calculation for size was highly questionable as it assumed the fossils had the proportions of a "normal" rhinoceros (!) and scaled up fossils from different "grades" to the largest grade by apparently arbitrary values (Fortelius and Kappelman 1993). Widely circulated mass estimates were based on those sizes, showing how important it is to look into these factoids before repeating them mindlessly. Fortelius and Kappelman used various calculations (body length, head size, limb diameters) to get a mean of about 11 tons for Paraceratherium, although it may need to be raised somewhat due to sexual dimorphism. The authors concluded that the largest bulls may get 15-20 tons* - but I will admit that I'm not a big fan of speculating on freak specimens. People tend to latch on to the freakishly big specimens and assume it is the average - anacondas provide a particularly heinous example of this. However, there may be some constraints involved so I'll grudgingly let it slide.
*Gingerich 1990 calculated 9 tons for one "grade", but noted that individuals in the biggest "grade" may weigh 14-15 tons. He also predicts a maximum of 20 tons (I'll get to that).

The biggest problem with calling Paraceratherium the largest ever land mammal is that Proboscidians are apparently not considered. I'd hate to use another outsized freak, but the largest elephant ever measured was 4.2 meters from the foot to the shoulder lying down and was estimated to weigh 12 tonnes. Many sources act as these are precise measurements, which they're not. Wood though the bull would have stood 4 meters tall at the shoulder while standing and Christiansen cites an equation to calculate bull Loxodonta mass:

This should yield a mass of around 10 tonnes, which is still close to the same size as a normal Paraceratherium. There still is the distinct possibility that the specimen had unusually long legs and some other measure (e.g. femur cross section) should have been used. Many species of proboscidian were smaller than today's elephant species and several were the same size, but on occasion there were species that got much larger on average (Christiansen 2004). Christiansen noted that the tall headed Elephas recki had a specimen that stood 3.75 meters at the shoulder in the flesh and various estimates gave masses approaching or exceeding 10 tonnes (Christiansen 2004). This species was a close relative of the living Asian elephant (E. maximus) and also seemed to share its more robust build than Loxodonta. The strait-tusked elephant E. antiquus seems to have been even larger with some specimens exceeding 11 tonnes and one partial femur hinting at an 14.5 tonnes specimen. Christiansen noted that fossils are normally assumed to be average size, although in that case it could have been an outsized specimen. Mammuthus species had a tall build similar to Loxodonta, but M. meridionalis was over 4 m at the shoulder and still weighed 7-10 tonnes.

It is not clear which species of proboscidian is the largest*. The mammoth M. trogontherii appears to have been 4.5 meters (14.7 feet) at the shoulder and weighed 13-15+ tonnes. Deinotherium giganteum was a non-elephant proboscidian (there is an excellent post here) that appeared to equal it in size. The author doesn't give any precise estimates, but the implication of these ballpark figures is quite staggering. I normally don't like freaks, but Christiansen states that such average figures would imply some specimens breaking the 20 tonne barrier. How could such a mammal get by?

*Wikipedia states that E. antiquus is 3.7 m at the shoulder, E. recki is 4.5, M. meridionalis is 4.5, M. trogontherii is 4.7 m and Deinotherium was up to 5 m. Once again, outsizes are given instead of much more useful averages. It also claims M. sungari was a 5.1 m 20 tonne mammoth, and since nobody else has heard of this species it could either be an outsized known specimen or a bunch of crap.


There still are a lot of open questions on why normal elephants are able to get so big in the first place. Clauss et al. 2003 note that elephants have a very low ingestion passage rate and digestibility rate, and Christiansen gives a figure of 40% for digestive efficiency. Elephants normally feed from 12-14 or even up to 19 hours a day, but Christiansen notes that a lot of this is low intensity feeding and consumption rates have been overestimated. Ruminants, even with more efficient digestive systems, appear not to have an advantage over hindgut fermenters at large sizes and have not evolved very large forms (Clauss et al. 2003). So maybe the inefficient digestive system of elephants is all that is possible at such sizes. Large size does have advantages such as requiring proportionally less food to maintain metabolism, avoiding predation, the ability to compete effective against smaller animals and to eat much less nutritious food (Clauss et al. 2003). Christiansen concludes that really giant proboscidians were a rare phenomenon since their dependence on large amounts of food (and increased movement) would have decreased population size and increased extinction rate. Often cited is a paper I can't find by Economos (1981) who concluded that the metabolic costs of gravity would limit large mammals to 20 tons (or tonnes?), and this was accepted by Clauss et al. (they ignored large proboscidians and mis-cited Fortelius and Kappelman claiming Paraceratherium was the largest land mammal). I unfortunately can't comment on that paper, but it does seem odd that at least three species averaged near that hypothetical limit and could theoretically have reached or exceeded it.


So to answer the initial question: It seems that ruminants are limited by competition from hindgut fermenters at large sizes and the largest of those species are probably limited by the environment. I'm skeptical of any proclamation of physical limitations, particularly one so relatively low and old, since there always could be ways of getting around them. 15+ tonnes isn't much for a sauropod, but for relatively recent herbivores with fast metabolisms it is quite a feat.

Christiansen, Per. 2004. Body size in proboscideans, with notes on elephant metabolism. Zoological Journal of the Linnean Society 140, 523–549.

Gingerich, Phillip D. 1990. Predictions of body mass in mammalian species from long bone lengths and diameters. Contributions from the Museum of Paleontology, University of Michigan, 28: 79-92.

There has to be a limit as to how large things can get. Whether the decided factor is the environment or biology, I'm not sure.

Large land animals are nonsensical. If you want to be freakishly large, at least do yourself a favor and become aquatic.

But the authors speculated it was a relict Castoroides. I don't have the book on me now, but I was absolutely baffled at how they got a beaver out of any of the sightings.

Is it me, or does that illustration fit the size and posture of a Megatheriid sloth much better than a beaver. And why does it have three digits?

Came across your blog while trying to read up on the mystery large octopus found in one of the 36 sleepers (Yves Cherel) and I'll be back often to read up on your interesting posts.

A big hi to you from Singapore.

I own this book, and the illustrations are actually not very good. They are all made in a bad comic-like style, without any acuracy or realistic proportions.