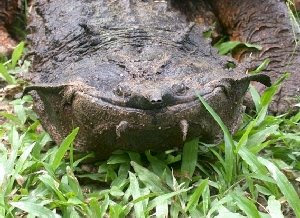 © 2006 Shawn Mallan, used with permission. Also available here
When I was using this as my desktop background, the various people overlooking my shoulder struggled to identify this animal. If the image had just extended a little more upwards I'm sure nobody would be guessing that this was a frog or lizard of some sort. This picture from the Wikipedia commons is equally as "mean" and strange looking: 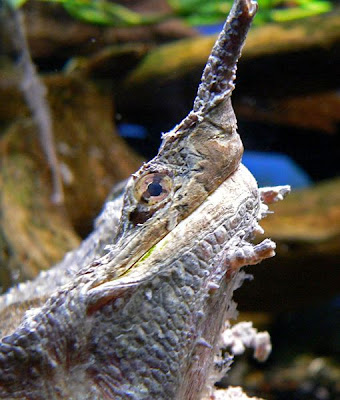 If this seems vaguely familiar, I've done something similar in this post which also featured a creature with a snorkel-like snout, large lips, a wide mouth and slightly raised eyes. That animal was the trionychid (softshell turtle) Amyda, to which the matamata is not related. Turtles can be broadly classified into cryptodires (e.g. trionychids) that can retract their necks strait in and pleurodires (e.g. the matamata) which have to bend it sideways to retract. Pleurodires currently live only in the Southern Hemisphere, the matamata lives in the Amazon and Orinoco river systems as well as Trinidad (Lemell et al. 2002). The matamata is known as Chelus fimbriatus and is nestled in the family Chelidae (Krenz et al. 2005) and appears to be most closely related to the toad-headed turtles, Phrynops (Seddon et al. 1997) which it somewhat resembles. While not necessarily very interesting from a phylogenetic standpoint, it does have some fascinating morphology.

It appears that the post-cranial skeleton of Chelus has yet to be described in its entirety (see here). The carapace of this species has sub-pyramidal knobs that makes it superficially similar to that of the (cryptodire) alligator snapping turtle Macrochelys; see this drawing by Haeckel (they're above and below the giant tortoise). Chelus is noted as being a poor swimmer that typically walks on the bottom of shallow waterways (Davidson 2001). Sexual dimorphism is limited to a concave plastron and long, thick tail in males and a flat plastron and smaller tail in females (Davidson 2001). With a reported carapace length of up to 45 cm and a length of up to 15 kg (by Wikipedia), this species is roughly the size of the snapping turtle Chelydra. The cervical vertebrae are noted as being "extremely long" and are apparently longer than the carapace (Gaffney 1977). I haven't heard or seen if the neck and head can actually be retracted into the shell.

The head of the matamata has received quite a bit more attention. The projections on the head are highly innervated extensions of skin and there appear to be veins associated with the ear that transmit vibrations; both have been viewed as analogous to a lateral line system (Winokur 1977). I unfortunately can't access this article, but the abstract tells me that the snout has erectile tissue but is immobile. Since trionchids are noted as being unique for drawing in water with their snout, apparently Chelus uses its snorkel more conventionally. Then there's the skull...

Eugene Gaffney colorfully describes it as "riddled with automorphies and looks as if it has been run over by a truck" (Gaffney 1977). The extremely flattened cranium has been compared to trionychids like Chitra (Lemell et al. 2002) - coincidentally I once confused the two. Chelus is a specialized suction feeder, and Lemell et al. discuss the kinematics and unique morphology involved. The hyoid apparatus is typically large in aquatic feeding vertebrates, but in Chelus it is among the largest in turtles and allows for a suction force comparable to Chitra. The mouth can open up to 80 ° and there is a missing cartilago transiliens, both of which appear to be unique situations for turtles. The presence of "cheeks", a reduced tongue, and an esophagus that can expand to four times its original volume are all related to the suction feeding as well. During suction the water just can't pass through like a fish, it has to flow back out but it does so after the prey is encased within the jaws. The Austaliasian pleurodire Chelodina is also capable of suction (and also has an incredibly long neck), but kinematically it appears to everything much faster (e.g. moving prey at 280 cm s–1 vs 80, maximum gape in 20 ms vs 60). Compared to other suction feeding vertebrates (fish and salamanders) the opening phase was very fast, but the closing phase took longer. Oh yes, and Chelus is able to capture prey without pressure waves, probably due to the unique shape of its skull.

Not exactly the most academic of sources, but it is fun to see them in action. Look for the slow motion replays at the end.

Curiously, Gaffney 1977 said that only one species of Chelus is "usually recognized", which made me wonder if there were some alleged other species out there. As Wikipedia tells us, this species has undergone some horribly confusing taxonomy, so perhaps it is a reference to that. There were also a couple fossil species, C. lewisi and C. colombrianus, from the Miocene that have a marked different pattern to the carapace (Villanueva 1988). The lowlands of the Lake Maracaibo basin in Venezuela have a lot of endemics, and it is reported that another extant species of Chelus may be among them (Scharegel 2007). Unfortunately it referenced a personal communication, so we can't tell exactly what unique characters this population/species may have. Villanueva pointed out that some characteristics of the carapace didn't have very obvious selective pressures, so perhaps if this is distant enough it can shed light on that. Even if it doesn't, it still highlights the fascinating diversity of South America that has still yet to be well understood.


Spring break already, weird. Well I'm going to attempt to clean up around town and maybe vote tomorrow. Who knows what will come next...

Is that how you lure people into your death trap? You just post a very interesting looking picture over a big hole and trap them all? Is that what you're trying to do to me right now???

Anyways, this is a good blog simply because the subject matter looks cool, and has a great name. The mere fact that you go into further detail about it is simply icing on a delicious (all ugly things really taste good) cake.

Note, the video is no longer available.

Note: now that the video is up and running, I have decided that, that is the way I shall eat fish from now on.