As I've been known to do, let's start this post off with something of a mystery: 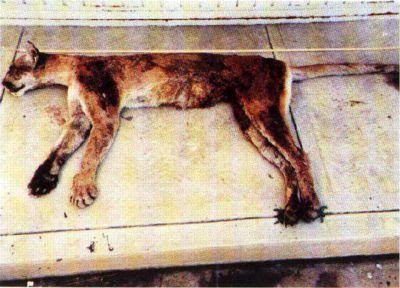 This certainly is not a normal looking puma (Puma concolor) - superficially it appears to be much more gracile than usual. The carcass was collected from Mexico in 1986 and was connected to something of a Mesoamerican legend called the onza, although at least one individual speculated that the legendary cat may have had a different basis. Regardless, this does not appear to have been a wholly isolated incident and the presence of other specimens (skulls) has been alluded to. Apparently there are some dental differences in addition to the long legs, large ears, faint stripes on the forearms, and (semi?) non-retractable claws. While at least one author prone to making outrageous theories speculated that this was an American "cheetah" (Miracinonyx), a 1996 genetic analysis in the ironically cryptic journal Cryptozoology identified it as being "indistinguishable from a western North American Puma". Over a decade later, absolutely nothing has been heard since.

These are interesting times we live in; the possibility of new large South American cat species has been seriously raised, making the idea of a unique puma population (sub-species?) seem more bearable. I haven't seen the genetic test, so I'm not sure it is consistent with that idea or if it is old enough to require another look. It would also be nice to see information on the skulls aside from a few vague remarks. The onza seems to be in dire need of a critical and comprehensive look, something far outside the scope of this article. But, oh, I do believe that Darren Naish at Tet Zoo did hint at some future coverage...


While I've already exhausted the onza as a viable topic, I think it can act as a sort of gateway to the rest of the puma lineage. First up are the American "cheetahs", Miracinonyx. M. inexpectatus was the larger of the two species, had a build between a cheetah and puma, and had fully retractable claws (Krausman & Morales, 2005). The claws of the cheetah (Acinonyx jubatus) claws are variously described as being either "weakly retractile" or "nonretractable" even in the same paper (Krausman & Morales, 2005) and it is implied that M. trumani (and some pumas?) had a similar condition. It has been quite overlooked, even by the previously mentioned paper, that the large dewclaw in living cheetahs plays a large role in predation by "anchoring" on to prey animals trying to escape (Londei, 2000). The enlarging of the dewclaw was due to the specialization in the other claws in locomotion, and it is curious to note that M. inexpectatus had a similar adaptation. Londei notes the additional curiousness of the puma having dewclaws much larger than expected with no known function, and noted that they might have been a vestige of sorts. So, what is the relation between the puma and American "cheetah"? Before the post-cranial skeleton was well known, M. trumani was thought to be an ancestral or modern puma "P. trumani" (Barnett et al., 2005); but subsequently it was placed in either the cheetah genus Acinonyx or even Felis (Krausman & Morales, 2005). It appears than most of the traits used to connect Acinonyx and Miracinonyx were associated with a cursorial lifestyle, but recently both morphological and genetic evidence suggests that M. trumani and Puma form a clade. They appear to have differentiated around 3.2 mya, perhaps due to increasing prairie and predation on pronghorns (Barnett et al., 2005). The very fast running speed of the unique pronghorns (last member of its family) would of course hint at a performance comparable with the cheetah. There is some interest in re-introducing cheetahs to the Americas, but as the article suggests, the individuals do not seem to be aware of the considerable separation between the Acinonyx and Miracinonyx. Regardless of the parallel evolution, I don't think meddling by introducing species will produce the expected results. Say, there is a local species that occasionally shows cheetah-like characteristics...

I don't mean to imply that they're terribly distant relatives, genetic evidence suggests that they diverged as recently as 4.92 mya (Johnson et al., 2006). The entire puma lineage itself was thought to have arisen 6.7 mya, but exactly where or what the cats looked like is not clear. Johnson et al. propose that the lineage is North American in origin, with Felidae itself originating in Eurasia only a few million years before. This model seems problematic of fossils from 3.5 mya of A. pardinensis, and Barnett et al. suggest that the New World was invaded about 6 mya by a puma-like cat. This is just barely within the confidence interval of Johnson et al., 2006. A. pardinensis was present throughout the Old World and was larger and less cursorial than the modern cheetah; and is noted for existing before molecular evidence assumed possible (Krausman & Morales, 2005). Judging by the supplemental data for Barnett et al, it appears that the oldest Miracinonyx is nearly as old. I haven't heard about any fossils of puma-like cats in the Old World [edit: See the comments], and it seems that the early evolution in this group is quite mysterious [edit: This still seems fairly true].

So far I've only talked about the members of the lineage that resembled pumas, cheetahs or something in between, but there is one remarkable oddball nestled within the group. Herpailurus yagouaroundi, also known as the jaguarundi, is one strange looking feline. Oh, I should note that it was the species possibly connected with some early "onza" legends, phew. Anyways, the species is said to have "few feline features", and is a small/moderate (~5.1 kg) species with short legs, short round ears, elongated body, and unmarked pelage at any size or age (de Oliveira, 1998). Only ocelots, jaguars, and pumas are larger and the name may translate as "fourth cat"...or "brown cat" (d. O.). The Johnson et al. paper remarkably puts this cat in the same genus as the puma (P. yagouaroundi), a move which a few sites (like wikipedia) and papers have also followed. I find this exceedingly odd not only due to the morphological differences, but also because Barnett et al. concluded that Puma concolor and Miracinonyx formed a clade. To my knowledge, this paraphyletic usage of "Puma" has not been formally addressed. Anyways, the supplemental material of Barnett et al. noted that there wasn't much support for the placement of the jaguarundi and that it had "nucleotide composition well outside the range of the other Felinae" and excluded it to "reduce the potential for phylogenetic artefacts and the influence of stochastic error". Johnson et al. did not cite this paper. The authors speculated that the jaguarundi may have diverged as much as 5 mya and evolved in South America.


This seems to about wrap it up for the puma lineage. Superficially none of the living species look alike at all, but I guess once we look closer it starts to make more sense. Molecular and morphological data actually seems to be in agreement about the existence of this group, although it does remain quite mysterious. Why is the jaguarundi so small and mustelid-like in a group prone to evolving a cursorial cheetah-like lifestyle? Are there any other oddballs that evolved? And then there is the inevitable string of questions regarding the onza.


Darn, it looks like I'll have to touch on a few members of this group in greater detail another time around.

Awe, why hello there kitty.

I wish to be a cryptologist's, it just sounds like such a creative job opportunity. You can just go around making great claims and not have to worry about backing it up.

The onza as a subspecies seems reasonable.

Bringing cheetahs (albeit the wrong ones) back to america would give people more creative ways to die.

Yup, there were pumas in the Old World during the Pliocene and Pleistocene (Puma pardoides, aka Viretailurus schaubi, aka Panthera schaubi). I've been reading up on them for the up-coming British big cats meeting and will say more about them at Tet Zoo during early March...

OK, i appreciate this is going to sound incredibly silly...

At Cryptozoology.com, fairly recently, someone posted a "Lolcat" image of a (presumably, or at least hopefully, pet) puma on someone's bed next to a domestic tabby cat, with the caption "O hai, I upgraded your cat".

That puma looked *extremely* similar to the "Onza" carcass photo above - gracile build, very short hair, and, in particular, the odd profile of the face. It looked extremely *dis*similar to the photos of a puma on someone's patio (somewhere in the northern US) which someone else posted in the same thread - the most immediate difference, apart from the face shape, was that Lolpuma had relatively *much* longer front legs than Patio Puma.

I understand that most pumas in the "exotic pet" trade are of South American origin, and that there are fairly well-known morphological differences between SA and NA races of puma. Maybe the "onza" was a wanderer from much further south?

looks to me like the poor thing starved to death