Before I get too far into this post, I would thank my sister, Caitlin McCormick, for being such a trooper and taking all of the pictures that I requested. I did realize that skull identification was made much more difficult being half a region away from the specimen as well as not having any photographs. Without it, I would just be rambling to myself about stuff that I kinda remembered.

When Darren Naish blogged this fascinating post on Saturday, one of the mysterious cat skulls reminded me somewhat of a skull I had found some years back (couldn't have been too many years) in Rhode Island. Aside from the melanistic Kellas cat from Scotland and the even more mysterious Mastiff Cats, the Dufftown skull apparently represents yet another mysterious cat from Britain, the atrociously named "rabbit-headed cat". Just read all of the links for a fascinating tale, and and this post too while you're at it.

The cat skull that I found, just to give a bit of background, was found in the town of Barrington, Rhode Island, which is quite suburban. There's a cool little map function on my flickr that can let you pinpoint the nigh-exact location of the skull, for anybody curious. It was found within what could be described as a 20 acre swampy bramble patch; in fact it was found in a frozen vernal pool. The skull was mostly sticking out when I found it, but I couldn't help but wonder if it had somehow been deformed by freezing temperatures (without breaking?). However, it is quite symmetrical and has features not explainable by deformation. What are the odds that the skull I find happens to be a little on the odd side?

As you can see in the picture, I think there were some grounds for remembering the Barrington skull as being similar to the Dufftown cat, although it is hard since they are not at the same angle. The postorbital bar (the bony ring around the eye) appears closed or nearly closed on the Dufftown cat, and is closed for sure on the Barrington skull. The nasal region, level of canine development (look at the prominence of the roots) and skull shape appear somewhat similar. However, the Dufftown cat exhibited a lot of weird characteristics that my specimen didn't have. My argument was that perhaps it was within individual variation too. The external appearance of the Dufftown cat is known, and it certainly is quite weird. There are some ferals living out in the woods (I recall maybe 3-4 different individuals), but none of them look odd or unusually large at all.

Darren pointed out that there seem to be a lot of characteristics of the Barrington skull pointing away from a domestic cat and towards a Bobcat. It is quite amazing that animals with around 8 million years (or so I interpreted) of separation could be confused like that. But sure enough, there does seem to be similarity between them. I'll use photographic comparisons to further illustrate my confusion. 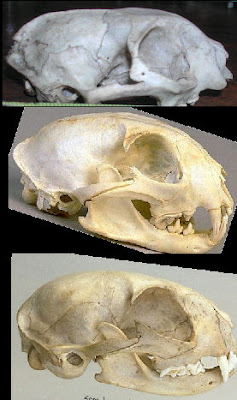 This is the first sort of comparison that I did, and it seems like the domestic cat makes a slightly better candidate. It should be noted that the nasal bone projection, skull flatteness and length, sagittal crest development and of course occipital bar closure is more pronounced in the Barrington skull than in the other two. There are similarities to the Bobcat skull too (note the apparent frontal concavity), but I can't help but wonder if some apparent similarities were due to size rather than phylogeny. According to bone clones a domestic cat cat skull in 4" and a bobcat skull is 5", and this appears to measure in between (Caitlin, back me up on this!).

While taken alone, the Bobcat skull seems to make a pretty likely candidate, which is what I first did. But when I found a good image of a domestic (well, feral) cat skull, that seemed like an even better candidate. The snout projection and narrow braincase (noticeably narrower in the Barrington skull) seem pretty similar between my skull and the bobcat, although the bobcat skull seems much more developed muscularly. However, the angle of the orbits and nasal opening and the shape of the zygomatic arch appear similar between the Barrington skull and that of a domestic cat. And it appear that domestic cats can have closed postorbital bars, see here and here. If any of you image hounds out there on the internet known of or have better comparisons, please let me know.

I'm going to hesitate on doing another anterior view comparison without the same angle. It should be noted that a bobcat skull (from here) does appear to have a similar nasal openings and canine development. However, the shape of the skull doesn't seem as flattened.

And this, Caitlin, is why the last picture you took for me was so important.

Darren Naish pointed out that Bobcats in fact lack a anterior pair of upper premolars, and my specimen appeared to. However, it sure does seem like from this picture that is in fact has those tooth sockets, the teeth having fallen out. While this may seem subtle, dental characteristics are strong diagnostic tools when it comes to identification. Caitlin, if you could be so kind as to confirm those are sockets and not just spots or something, well, thanks.

So it looks like this skull is not from a bobcat, and appears more similar to the skull of a domestic cat. I say more similar because it doesn't match up perfectly. As you could see, there do seem to be some characteristics that lay outside what I would expect for normal variation. I highly doubt that this is some exotic species, but it could be from an odd breed of cat. Of course, there probably are a whole host of strange subtle characteristics that I missed out on here too. Not having a database of cat skulls is frustrating as well. From a preliminary standpoint, I think the Barrington skull can demonstrate the variation on the boring old housecat. I think.

Some more blogs in the future, I'm unfortunately going to be quite busy in the near future though. Stupid Organic Chemistry.

I have come across this webpage which had another photograph of the Dufftown skull compared with a normal cat skull, dorsal this time. 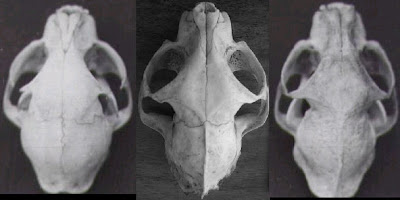 It should be noted that the external appearance of the owner of the Dufftown skull is known, and it is quite strange looking:

While the image is often "squished" on webpages making it look even weirder, this certainly doesn't look like a normal cat. But is it different enough to warrant a new species? If anybody knows about any more views of the Dufftown skull, I'd also appreciate it.

Posted by Cameron McCormick at Tuesday, April 03, 2007
Email ThisBlogThis!Share to TwitterShare to FacebookShare to Pinterest

Excellent stuff. Won't have time for a while to think about this properly, and all this variation is difficult to keep track of. The Barrington skull (if I may) is indeed like the Dufftown cat in a few ways (it seems to have shallowly concave frontals and the shape of the external nares is similar, for example), but quite different in others. Dorsal views of the Dufftown skull show a proportionally small cranium, for example (whereas the Barrington skull is similar to domestic cats and bobcats according to your photos).

Anyway, more on this another time.

Finally, I get some much deserved recognition, or rather I think it's all due to my pointer finger, granted my brain must have played some role in this too which can be simplified by the word "me". So yes, thank me.

I, and my mighty ruler of inches and centimeters shall back you up on whatever measurements you so desire.

Those are sockets and not just spots or something. I am a trusty worthy person, worthy of your trust and money.

Hi, I seem to have a live version of the cat the skull came from. There is a very pronounced ridge running from midskull to the back of its skull. He is also a very large and tall cat, 20 lbs. lean and over 2 ft. tall. I'ts a redpoint siamese, but is much bigger than others of its breed.I wonder if there is any bobcat in it's parantage. I just know I've never seen a skull like this on any cat before. Of course it's still wearing it's skull at this time, so I can't verify any other variations. Hope this helps.

Yours is the only site I found- I have a cat skull given to me by someone (building inspector in NY)- he found it in the basement of old building- and the skull has complete orbital rim- similar to your Barington cat! The cat skull has distinct suture lines, so it is not from an adult cat. It seems to come from a 15-20 lbs cat. There is always a chance that the orbital rim may ossify in older cats, but that is ruled out in this skull I have. It is certainly an atypical cat, and god to know you found a similar skull. Perhaps there are more cats in the Northeast like this.

P.S. Why don't you think about Veterinary Medical career? Lot of options, including research.

Thank you for this post. I thought I found a mongoose skull because of the location i found it (Bahamas). By your pictures there is no disputing the fact that it is a domestic cat. I know this post is old but I hope you understand that I am grateful. I hate cats but it was a cool find none the less.
Thanks!
Geosponge (a.noilescz@gmail.com

very interesting information, I really like it because it can add insight for me more broadly, thank you very much for this extraordinary information
Obat Benjolan Di Pipi Atau Wajah Tanpa Operasi,