In the first post of this accidental series, I raved about using Strait Carapace Length (SCL) to compare turtle sizes, made up the designation 'Mega-Turtle' for species regularly exceeding a 2 meter SCL, and to my horror discovered that proper descriptions of most Mega-Turtle specimens are either very hard to find or currently non-existent. At some point I'd love to cover the more obscure Mega-Turtle and near-Mega-Turtle species, but my taste of the topic thus far was of sheer frustration. This post will finally cover my intention of writing about Mega-Turtles in the first place: giving some attention to the largest species of them all, for once.

Oh, and here's the teaser graphic from last time with proper captions:

The colorfully named Stupendemys geographicus is a pleurodire, or side-necked turtle, and hence a very distant relative of the other Mega-Turtles. Stupendemys was discovered in 1972 from "late Tertiary" deposits in Venezuela and first described in Wood (1976). The paratype specimen described by Wood (1976) had a fairly complete carapace (amongst other bits and pieces) with an SCL of 2.35 m and carapace width of 1.85 m - it is the gray shell in the above figure. Another author (Wood 1982) estimated the specimen had a total length of 3.65 m and weight of roughly 2 tonnes, presumably from scaling up extant relatives. The type specimen was more fragmentary and even larger, with an estimated SCL of 2.50 m and width of 1.90-1.95 m (Wood 1976). The Pierre Shale Archelon probably has an SCL comparable to the Stupendemys type specimen, although it is hard to say which is larger as Archelon has a very wide carapace and Wood (1982) suggests it was lightweight compared to Stupendemys geographicus due to reduced ossification. It is curious that popular sources claimed Archelon to be the 'largest turtle ever' in the first place - possible explanations include the discovery of Archelon in the English-speaking world and subsequent bias, the impressive completeness of the Yale and Vienna specimens, and only having the 4.5 m total length figure reproduced*. There is no longer any excuse to claim Archelon as the record-holder.

* Heuvelmans (1968) humorously stated the Yale specimen had a 12 foot carapace and 25 foot total length - despite a plate in the book clearly demonstrating otherwise! He then goes on to claim that "[t]here are some reasons for thinking that such giants might have survived" and listed some vague Father-of-all-the-Turtles type legends. Curiously, he tossed the type in the end due to vagueness.

In 1992, and the same locale as the type and first paratype, a Stupendemys geographicus was uncovered with a 3.3 m SCL and 2.18 m carapace width (Scheyer and Sanchez-Villagra 2007, Orenstein 2001) - this specimen is portrayed as the black shell on the increasingly distant figure. It is astounding that the largest known turtle shell is only from the late Miocene, or approximately 5-6 million years ago. Scaling up from the extrapolations in Wood (1982) gives a possible total length of 5.25 m and weight of around 6 tonnes - however the shell is proportionally narrow in this specimen, as the type and paratype predicted ~2.5 m and 2.6 m, respectively. It is unfortunate that I cannot find the original publication and any photographs within, but it is at least cited by several papers (i.e. it exists!). Scheyer and Sanchez-Villagra (2007) investigated fragmentary costals from the same individual and determined that the turtle had a normal mode of growth, unlike fast-growing Archelon and the extant leatherback, and took at the very least three decades to reach a 3.3 m carapace - possibly as long as 60 or 110 years! The authors also hinted at the possibility that Stupendemys geographicus had size variants due to sexual dimorphism, presumably with other specimens in mind (Scheyer and Sanchez-Villagra 2007). 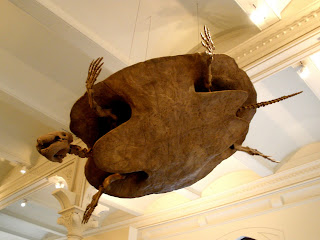 Scheyer and Sanchez-Villagra (2007) noted that Stupendemys geographicus has a shell with a lightweight diploe construction - and retained stability - as a consequence of scaling effects, however it does not resemble the spongy bone typical of Archelon and other tetrapods with an open marine habitat. The flattened shell of S. geographicus is a strong indicator of an aquatic habitat, while the vast size suggests the turtle probably only left the water to lay eggs (Wood 1976). Wood (1976) was uncertain if S. geographicus was a marine or freshwater species, but it has been determined the formation it was recovered from was near-shore/low coastal savanna/freshwater river (Bocquentin and Melo 2006). Fossil associations seem to imply that S. geographicus was littoral (Bocquentin and Melo 2006), and Wood (1976) speculated that it may have had flippers. Bocquentin and Melo (2006) described another Stupendemys species, S. souzai, which was smaller in size, had a strange vertical collar-like structure suggesting poor swimming ability, and was found in continental areas where it may have inhabited swamps and small streams. Subsequent workers criticized the placement of the assorted solitary elements into S. souzai and argue that material may not even represent Stupendemys (Meylan et al. 2009). That's right, there were other large - but perhaps not giant - pleurodires from the Amazonian Miocene...

One of those other species is Caninemys tridentata, which is known only from a skull with a bulldog-like shape and canine-like projections (Meylan et al. 2009). This skull was assumed to be from a Stupendemys at first, but is only half the expected size (estimated SCL of 1.2-1.5 m) and probably represents a different taxa (Meylan et al. 2009). It is possible that the suggestion of Stupendemys being a predaceous species from Bocquentin and Melo (2006) was based off this skull, as I can't think of any other morphology that would be telling in this regard. Wood (1976) claimed that S. geographicus was "largely if not entirely herbivorous" because "all of the largest living turtles... are totally (or nearly totally) herbivorous" - I have no idea why someone would think this. The largest extant podocnemidid pleurodire, Podocnemis expansa - with an SCL up to 0.82 m (Wood 1976) - is herbivorous, although diet in the genus is rather variable (Teran et al. 1995). Until cranial remains which can be unambiguously assigned to Stupendemys are found, this area of its biology should best be left a blank. 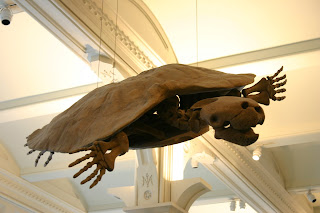 Could Stupendemys actually have been a prey item? It appeared to overlap in time and range with the Mega-Caiman Purussaurus which had a 1.5 m head and ~12 m total length - and possible weight of ~10+ tonnes. This website has a photo of a "tortoise" shell (from Stupendemys or another pleurodire?) with a Purussaurus bite... which the turtle survived. It seems unlikely that a 3 m+ SCL Stupendemys would have been easy prey, and may have been effectively predator-free. This could suggest that extreme size and a carapace only reduced for mechanical purposes could have evolved at least partially in response to such a gargantuan predator.


It appears that a lot of Stupendemys biology remains a mystery, undoubtedly thanks in part to the lack of anything analogous in this Megafauna-deprived era. There are some vague references to other South American pleurodires of a size comparable to Stupendemys, such as some very large cervicals (Orenstein 2001) - but it would probably be best to wait and see how things get sorted out. The diversity of this not-to-distant time was truly staggering - there were 12 probably sympatric crocodile from the same locale as the Stupendemys holotype - so I can't imagine what other surprises the continent has in store.
References:
Bocquentin, J. and Melo, J. (2006) Stupendemys souzai sp. nov. (Pleurodira, Podocnemididae) from the Miocene-Pliocene of the Solimões Formation, Brazil. Revista Brasileira de Paleontologia 9(2), 187-192. Available.

Maybe you have found yourself an novel forte. (Forgive me, I'm not sure how to type the accented "e") You yourself have pointed out the serious lack of research into your termed Mega-Turtles. I don't think it's a bad idea at all.

I can see myself working on Mega-Turtles more... officially. I'll have to add it to the Big Book of Possibilities.

i genuinely love your own writing kind, very useful,
don't give up as well as keep posting as it simply that is worth to follow it.
looking forward to look into additional of your current content pieces, good bye!

I love this blog, is really amazing. The turtles are my favorite animal because they are quiet and they never represent a danger for anybody. This is the main reason why i love it.
buy viagra

The Archelon was probably a predator that ate small animals like squid or hard-shelled ammonites. Not sure what the Stupendemys was doing.

The Archelon was probably a predator that ate small animals like squid or hard-shelled ammonites. Not sure what the Stupendemys was doing.