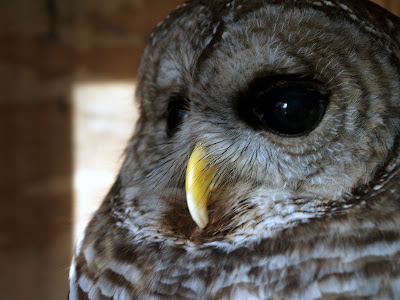 Strix varia (Barred Owl) suffering from a cataract. From my Flickr.
The Lord Geekington has a proud history of haphazard posting frequency, so sharing my infrequent competent animal photographs seems like a logical extension of this. Unlike most bloggers, I am utterly incapable of just sharing a photo.


Barred owls are medium-sized (0.5-1.0 kg, ~1 m span) strigid owls easily recognized as the only 'true' owl in the eastern half of North America with dark brown eyes. They have recently and quite rapidly expanded into the western portion of North America; in California the owls were first sighted in 1981 and by 1996 were known from 61 specimens in 12 counties (Dark et al. 1998). Hybrids between male Barred Owls and native female Spotted Owls (S. occidentalis) have been recorded - as have backcrosses (hybrid x non-hybrid) - but this phenomenon may be uncommon and thus fairly inconsequential (Kelly and Forsman 2004). It is still worth noting that hybrid x Barred Owl progeny are rather numerous (implying high fitness?) and that those F2 specimens are hard to correctly identify in the field (Kelly and Forsman 2004, Funk et al. 2007). It appears that the most problematic aspect of the Barred Owl invasion is the aggressive nature of that species and its apparent overlap in niche with the Spotted Owl, despite occupying somewhat different habitats (Buchanan et al. 2004). Computer modelling predicted that most of the Spotted Owl's northern range (down to about 38° N) has the potential to be invaded by Barred Owls (Peterson and Robins 2003).

It is hypothesized that the range expansion of Barred Owls is due to anthropogenic changes, as it is difficult to explain the very recent range expansion otherwise (Dark et al. 1998). So what can be done against the invasion? Buchanan et al. (2007) note that most aspects of the invasion remain uncertain and controversial - most importantly if the Barred Owl is indeed directly causing the Spotted Owl population decline - and that further research of the Strix species interrelationship is needed. This is a highly complicated issue, especially considering the interests of some groups, but it certainly appears that the situation for the Spotted Owls is dire and that research and management plans are needed (Buchanan et al. 2007). It is unfortunate that most biological invasions are past the point of no return once they are recognized - but this does not always have to be the case!

interesting timing, i've just taken a 're-interest' in this issue and was looking for more resources. thanks for posting your sources.

My friend mentioned to me your blog, so I thought I’d read it for myself. Very interesting insights, will be back for more!make money

Thanks a lot very much for the high quality and results-oriented help. I won’t think twice to endorse your blog post to anybody who wants and needs support about this area vintage clothing uk

Nice news! I have never heard about this event before https://www.aaatreeserviceJJRC H43WH Drone Price

Thanks for making the effort to discuss this about Online Ad, I feel strongly about this and love learning more within this topic. tree trimming near me