The Benefits Of Having Stuff Grow All Over You

One would think that epibiotic growth, that is, commensal organisms attached to a living surface, would be neutral at best and a hindrance to locomotion at worst* for the basibiont, the substrate organism. 'Fouling' by epibiotic growth is a virtually omnipresent pressure in aquatic environments, so basibionts variably avoid, defend against, or tolerate epibiotic growth (Wahl 1989). Since there are potential examples beyond count, given the tendencies of this blog I'll focus on some recently described examples of tolerance from big vertebrates.

* Potential disadvantages for the basibionts includes increase in weight, decrease in flexibility, increase in friction, damage from anchoring, damage due to grazers preying on epibionts, and so forth (Wahl 1989 - citing various).

The loricariid catfish Pterygoplichthys (possibly P. disjunctivus and hybrids) was accidentally introduced to Florida and has been observed interacting with manatees while both species were present near springs during the winter, avoiding unsuitably low temperatures (Nico et al. 2009). The interaction is that the catfish graze upon the grazers: 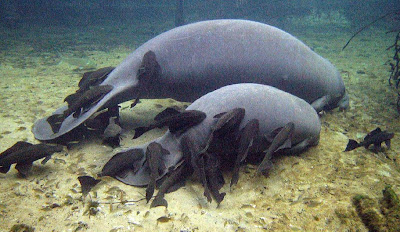 A mother and calf with 16 loricariids. Note that manatees are typically covered in epibiotic growth. The authors recorded another instance of over 40 catfish on one individual, almost obscuring it from view. Photograph by James P. Reid, taken from Nico et al. (2009).

The heavy covering of epibionts on manatees indicates tolerance and implies either a neutral impact or a beneficial one. Nico et al. (2009) speculate that while the epibiont layer probably does not provide notable protection against UV radiation (as manatee skin is very thick), it could play a role in heat absorption. Manatee behavior towards the armored catfish is contradictory; while some individuals ignore them (Fig. 1) even if as many as 40 catfish are involved, others apparently avoid congregations of catfish and others still are irritated by the fish and attempt to dislodge them (Nico et al. 2009). Since the interaction is so recent, perhaps it is possible that manatees have not learned or evolved a standardized response. Manatees generally ignore other fish including remora species that feed on their fecal matter and bluegills that apparently feed on epibionts (Williams et al. 2003, Powell 1984); however they are not tolerant of a porgy species which occasionally nips at them (Nico et al. 2009 - citing pers. com.). The grazing on manatees could be beneficial for the removal of parasites and removal of diseased and damaged tissue, although it also carries the risk of disease transmission (Nico et al. 2009). This is a surprisingly complicated situation and clearly the role of epibionts needs to be further investigated, as do the risks and benefits of allowing fish to graze. Nico et al. (2009) speculate that manatees that avoid loricariids may move to colder water, where they expend more energy than normal attempting to maintain body heat.

The interaction between cetaceans and their epibionts seems to be less obscure than the manatee situation. In dealing with Orcinus orca predation, mysticetes have adopted fight or flight countermeasures; the Balaenoptera species are fliers while the right whales (Eubalaena spp.), bowhead whale (Balaena mysticetus), humpback whale (Megaptera novaeangliae) and grey whale (Eschrichtius robustus) are fighters (Ford and Reeves 2008). Although the number of documented cases of orcas killing mysticetes are few, the rate of scarring suggests that predation attempts are significant, likely for juveniles (Ford and Reeves 2008). The ability to sprint at considerable speeds in the Balaenoptera species seems to be a direct evolutionary response to predation, but the fight species may have evolved to be slow and maneuverable primarily because of their ecological niches (Ford and Reeves 2008). Possibly mirroring the evolution of horns in some bovids, the offensive structures in right whales and humpback whales are used both for intraspecific male combat and interspecific defense and it is not clear for what purpose they originally evolved (Ford and Reeves 2008). Although right whales and humpback whale will swing or lunge with their heads, flippers and flukes are the primary means of defense for these species; gray whales roll on their backs to protect their vulnerable ventrum (Ford and Reeves 2008).

Right whales have hardened patches of skin known as callosities on the dorsal, lateral, and ventral surfaces of the head. These callosities host thousands of amphipods, epibionts with no obvious beneficial function for the whales - apparently the cornified epidermal tissue provides their ideal habitat and harboring the arthropod is a side effect for possessing the morphology. Southern right whales, however, possess barnacles which probably do have a function in making the callosities more formidable. 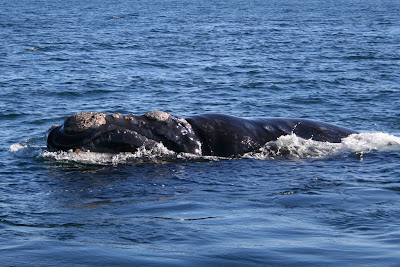 The Southern Right Whale has callosities with both amphipods and barnacles. From here. Has anyone every suggested that right whales may be responsible for sightings of 'marine saurians'?

Humpback whales lack callosities, but they have analogous barnacles which fulfill the same function - and provide an unambiguous example of a positive epibiotic interaction. Humpbacks can have up to 450 kg of large barnacles ( up to a 5 cm diameter) concentrated on the head, leading edge of their flippers, tips of the tail flukes, throat pleats, and near the genital slit (Ford and Reeves 2008 - citing Clark 1966, Slijper 1962). While intraspecific purposes are also likely, it is probably no coincidence that humpback whales defend against orcas using their head, flippers, and flukes (Ford and Reeves 2008). It seems like the throat and genital regions would be particularly susceptible to either biting or ramming attacks, further suggesting the defensive function of the barnacles.

Grey whales have often continuous encrustations of barnacles on the dorsal portions of their rostrum, anterior portion of their backs as well as their flippers, fluke, and elsewhere (Ford and Reeves citing Rice and Wolman 1971). Considering the defensive behavior of the whales, once again it appears that the barnacle placement is no coincidence. Exactly how these whales attract barnacles to particular portions of their body certainly is a good question; how do the callosities of some right whales have barnacles and others don't?

Epibiosis certainly doesn't end with heat balance (maybe) and creating weapons, Wahl (1989) notes that other potential benefits for the basibiont include a supply of vitamins and/or nitrogen compounds, water retention during low tide, camouflage, mask chemical cues, and drag reduction (!) - thanks to hydrophobic bacteria on skin. There are of course many, many potential disadvantages as well.

Posted by Cameron McCormick at Thursday, November 19, 2009
Email ThisBlogThis!Share to TwitterShare to FacebookShare to Pinterest

This post is really interesting. I already asked me often what purpose the strange overgrown patches of skin found at right whales have. I have already seen some examples of male beaked whales which had barnacles on their teeth (!), and I already speculated that this could have some advantage at fighting, because the sharp edges of the barnacle carapace can possibly cause more damage than the pure teeth. They can also "elongate" the functional length of the teeth, when they are near or at the tips of the teeth, what could be also beneficial for fights.

You'd think barnacles would be the worse for wear if they were used as battle tooth extensions and other weapons - is it possible that the barnacle species that colonize these whale are unusually robust, or is this within the range of tolerance for most species.

It is also interesting that humpbacks will try to rid themselves of barnacles, maybe they're trying to keep a balance between being streamlined and having formidable weapons.

If I think how nasty barnacles can be if you try to remove them from mussels, it is not hard to imagine that they could cause additional damage on whaleskin at interspecific fights. As long as the shells don´t have contact with hard objects but only skin, they would probably not get any serious damage themeselves.
Of course not all barnacles could have a benefit, there is probalby no effect caused by the smaller specimens, but I could imagine that bigger ones could have an effect. But in any way, the fact that barnacles grow on the teeth of an animal on a regular base is highly bizarre.

Barnacle armor - wow. I think right whales have hair bristles on some parts of their face patches which prevent barnacle growth.

Hey,This is a very nice post and vrey interesting.it is real quality writes as offered on this post.buy vintage clothing

It seems interesting. Its like you read my mind! You appear to know so much about this, like you wrote the book in it or something. I think that you could do with some pics to drive the message home a little bit, but other than that, this is great blog. A great read. I will certainly be back.buy vintage clothing

Amazing read, thanks for helping me out! Download clone hero best songs from: clone hero charts