I probably shouldn't admit this, but I was unaware of this order of fishes until National Geographic updated an AP story concerning a strange fish captured near Brazil with input from an ichthyologist. Few 'fish' clades* have an elongate body with a prominent first dorsal fin located almost directly behind the head, so I reasoned the the catch was some sort of aberrant macrourid... whoops.
* That is, 'fish' in the paraphyletic sense. Other actinopterygians with roughly similar morphology include (larval?) Stylephoriformes (no longer thought to be Lampridiformes, Miya et al. 2007) and several derived families within Lampriformes (see below). Captain Hanna's Mystery Fish (a probable lampridiform) had this morphology as well. The only non-actinopterygian example that comes to mind are members of Chimaeriformes, distant relatives of sharks and rays.
The 'jellynose fish' order is Ateleopodiformes; the former is a reference to the (sometimes - see below) bulbous snout and the order name, meaning 'imperfect feet', likely refers to the pelvic fins which are typically reduced to a single ray. Fishbase 'remarks' that other characters include a largely cartilaginous skeleton, a dorsal fin with 3-13 rays, a small caudal fin confluent with the long anal fin, and 7 branchiostegal rays. It is curious that National Geographic states that ateleopodids are "well-known" as the opposite appears to be the case; Prokofiev (2006) remarks that the clade is "very poorly studied" and Sasaki et al. (2006) note that there has yet to be a comprehensive morphological review.
Ateleopodids are paedomorphic and specialized, which has complicated analysis of their phylogeny (Sasaki et al. 2006). Early workers placed ateleopodids near (Sasaki et al. 2006 - citing Rosen and Patterson 1969) or within (Miya et al. 2001 - citing Nelson 1976, 1984) Lampridiformes, although one analysis placed them in an unresolved trichotomy with Stomiiformes and derived teleosts (Sasaki et al. 2006 - citing Olney et al. 1993). Sasaki et al. (2006) described the cranial morphology in detail and noted that ateleopodids and lampridiformes share the character complex of deep insertion of the rostral cartilage into an open space in the ethmoid region - albeit with differing methods of insertion. The two groups also share early life history characters such as large pelagic eggs and newly-hatched larvae with dorsal, pectoral, and pelvic fins (the latter positioned posterior to the yolk sac); at least one member of each group also possesses spotty educationalists muscles separated from the epaxial muscle mass (Sasaki et al. 2006 - citing various). Quite interestingly, mitogenomic evidence has placed Ateleopodiformes and Lampridiformes as sister groups (Miya et al. 2001). Since a long body with a prominent first dorsal fin appears in ateleopodids and derived lampridiformes (Miya et al. 2001), this indicates that the morphology is either due to parallel evolution or (less likely in my opinion) that opahs and velifers are secondarily shortened.
Evolutionary relationships aside, Sasaki et al. (2006) document the incredible phenotypic plasticity exhibited by ateleopodids. The 'jellynose' appearance does not occur in all ateleopodids, and in fact its presence is variable within species. 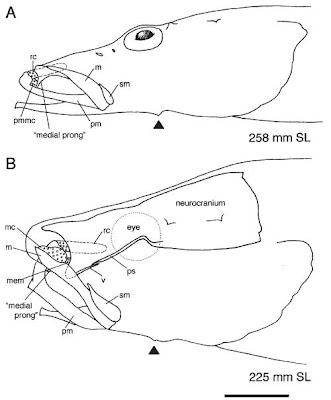 Ateleopus japonicus from Sasaki et al. (2006). These are young individuals, the top individual is pelagic and the bottom is benthopelagic.
Phenotypic plasticity can be explained as one genotype expressing multiple phenotypes due to differing environmental conditions. The Journal of Experimental Biology has a whole open-access issue devoted to the concept -this article in particular sums the concept up well. Anyways, pelagic individuals have a flat head and terminal mouth and benthopelagic individuals have the 'jellynose' condition with a rounded head and more subterminal mouth (Sasaki et al. 2006). The 'pelagic' condition is the default and at some point early in development the low jaw shortens and the upper jaw shifts posteriorly, 'folding' the head in the process (Sasaki et al. 2006). The authors unfortunately did not mention phenotypic plasticity by name, it was beyond the scope of the morphology-centric paper, which leaves an opening for a followup... 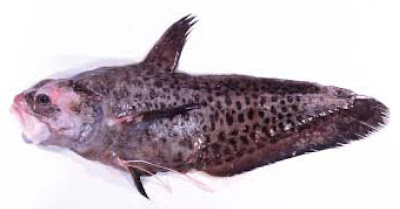 Guentherus katoi, Senou et al. (2008). 643.7 mm (25") SL. Photograph by H. Senou.
While the taxonomic status of the Brazil fish cannot be determined at the present time, one new species has been described quite recently. Three large specimens of Guentherus katoi were caught in a trawl off Japan in 2006; like the other member of its genus (the enormous G. altivela) there are three free pelvic fin rays followed by normal rays (as opposed to one) and the body shape is far from anguilliform (Senou et al. 2008). G. katoi differs from G. altivela in having a somewhat smaller head (25.6-26% SL vs. 26.4-35% SL), and larger orbits (5.2-6% SL vs. 2.4-3.5% SL); curiously, the G. katoi specimens had a small adipose fin behind the dorsal fin, and lacked scales, pores, and a lateral line (!) (Senou et al. 2008).
I think that about wraps it up for the ateleopodids, what started off as a commentary on a news item has blown up beyond recognition.
References:
Miya, Masakai, et al. (2001). Mitogenomic Exploration of Higher Teleostean Phylogenies: A Case Studyfor Moderate-Scale Evolutionary Genomics with 38 Newly Determined Complete Mitochondrial DNA Sequences. Mol. Biol. Evol. 18, 1993–2009.
Miya, Masakai, et al. (2007). Mitochondrial genome and a nuclear gene indicate a novelphylogenetic position of deep-sea tube-eye fish (Stylephoridae). Ichthyological Research 54, 323-332.
Prokofiev, A. M. (2006). New Finding of Ateleopus purpureus Tanaka, 1915 Ateleopodiformes: Ateleopodidae) in the Pacific Waters of Japan. Journal of Ichthyology. 46, 342-344.
Sasaki, Kunio, et al. (2006). Cranial morphology of Ateleopus japonicus (Ateleopodidae: Ateleopodiformes), with a discussion on metamorphic mouth migration and lampridiform affinities. Ichthyological Research 53, 254-263.
Senou, H., et al. (2008). A New Species of the Genus Guentherus (Ateleopodiformes: Ateleopodidae) from Japan. Bull. Natl. Mus. Nat. Sci., Ser. A, Suppl. 2, 13–19
Posted by Cameron McCormick at Thursday, October 01, 2009
Email ThisBlogThis!Share to TwitterShare to FacebookShare to Pinterest

Wow, I didn't see this coming. I came back to check the ranzania article and found this. I'm from Brazil and have been reading your blog for a while. Also I'm part of a small web forum about cryptozoology and I'll be posting a link there to this article, some of us were wondering wich kind of fish that thing was. Too bad so few people there can read english.

I just registered for this flying umbrella, and wanted to be un-troll-like in my prescence.

I appreciate reading a wellspoken (er, written) composition. In particular, I appreciate a well-documented and annotated piece.

I found your blog while researching the lazarussuchus to satisfy my own curiosity. By the way, for a hoot check out wikipedia's entry on the subject.