Finishing up my undergrad education is proving to be more time intensive than I was expecting, partially thanks to tiny fish and giant boots. Rather than posting nothing for the next three weeks, I figured I'll try my hand at (i.e. rip off) a Naish-esque "picture of the day"-type post. 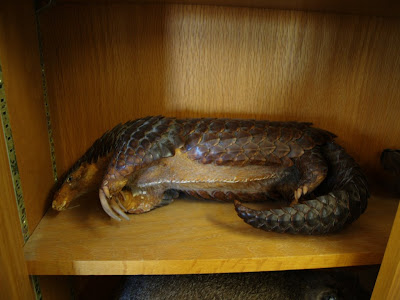 I've had my eye on this preserved pangolin for a couple years now and last week an open lab finally gave me the opportunity to photograph this pholidotan. I didn't realize how much the lighting sucked in the room, but it was sufficient for the purposes of this post. Although occasionally confused for reptiles and formerly allied with xenarthrans (armadillos, anteaters, sloths), molecular evidence strongly supports a Pholidota + Carnivora clade (= Ferae) within Pegasoferae (bats, horses, dogs cats) which is in turn within Laurasiatheria (cows, whales, shrews, hedgehogs) (Nishihara et al. 2006, also citing Madsen et al. 2001, Murphy et al. 2001, Waddell et al. 2001, Amrine-Madsen et al. 2003). Kjer and Honeycutt (2007) used mitochondrial DNA to come up with a different topology featuring Pholidota in the middle of Laurasiatheria, but note that they did not correct for potentially inflated Bayesian posterior probabilities. Fossil evidence suggests that pangolins are a member of the order "Cimolesta" (probably an unnatural group) along with Pantodonta, Taeniodonta, et cetera (Boyer and Georgi 2007). It's a good question as to how all of this fits together, although since I once tried (and failed) to write about it, I'll leave it as is...


There are eight extant species of pangolin which most sources unfortunately lump into the genus Manis. Gaudin and Wible (1999) proposed that the Asian pangolins could be placed in Manis, the arboreal African species in Phataginus, and the terrestrial African species in Smutsia; this was based off of endotympanics and the authors suggested more characters and more extensive analysis before any taxonomic pronouncements were to be made. Botha and Gaudin (2007) note that such a study has not yet been done, but to make classifications easier in this post I'm just going to pretend that the proposed subgenera are actual genera. As David Marjanović will tell you at the Tet Zoo comments, there isn't an established definition for what a "genus" entails, so I figured I'd just call them something useful from a systematic standpoint. That and attempt to be cutting edge. 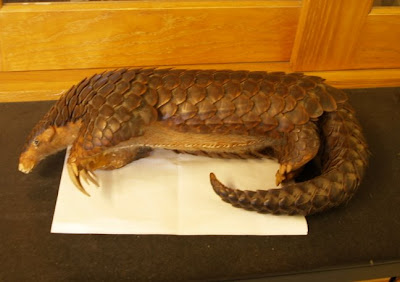 So anyways, what species is this pangolin? The tail appears to be as long or slightly shorter than the body, thus Phataginus tricuspis and Uromanis tetradactyla can be ruled out immediately. Although this looks like a heavily built animal, the 8.5 by 11 inch paper indicates a head and body length of 13-14 inches (33-36 cm), considerably smaller than Smutsia temminckii (females are 45-47 cm, males 49-55 cm) and the even larger S. gigantea (Heath 1992). Additionally the scales seem too small proportionally to be from a Smutsia and as far as I can tell that genus lacks hairs in between the scales. It's worth mentioning that the scales of pangolin are fused hairs, which makes it all the more remarkable that they can take up 1/4 to 1/3 of the body weight (Heath 1992). 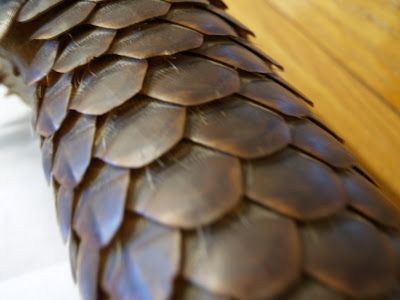 The review of Paramanis culionensis and P. javanica morphology by Gaubert and Antunes (2005) notes that diagnostic characters for these species are 19-21 total scale rows and 15-18 scale rows (respectively); I counted at least 21 for the mount. Even though the authors illustrate the scales from the head and scapular region of the Paramanis species in dorsal view, it is quite clear that they do not resemble the scale shape from the mount at all. 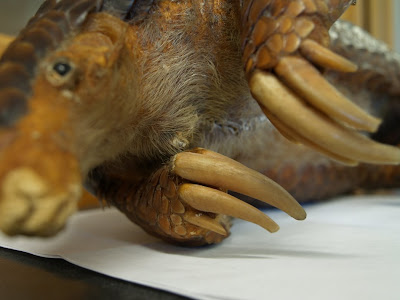 So this just leaves the species which are definitely in the genus Manis, the Indian pangolin M. crassicaudata and the Chinese pangolin M. pentadactyla. I'm going to say that the robust body, thick tail, and scale shape are all suggestive of M. crassicaudata - although I can't be completely certain that this is within the morphological variation of M. pentadactyla. If there is anybody out there familiar with the morphology of these species, please, clue me in!

Alright, back to work.

Gaudin, Timothy J. and Wible, John R. 1999. The Entotympanic of Pangolins and the Phylogeny of the Pholidota (Mammalia). Journal of Mammalian Evolution 6, 39-65

not a science student but Fused hairs??? Go to riverdaletimes.blogspot.com my blog has got some photos and info on identification of a chinese pangolin.(check the older posts of July I tink.