The Ecomorphology of Arctodus

The enormous crown-group bear Arctodus simus is no stranger to this blog, I last covered it a couple years ago, but thanks to a new publication I feel obliged to give it another go. Other motivations include my guilt about letting that prior post get so bloated with topics and my annoyance with the portrayal of this animal in the media… so here we are!

Large and potentially fearsome animals are often subject to “Godzillafication” in popular culture and Arctodus simus is no exception. One of the more egregious offenders in recent memory is the oddly named show Jurassic Fight Club which claims that the bear is 11.5 feet tall (3.5 m), twice as big as extant bears at up to 2500 pounds (1134 kg), and capable of running at 45 miles per hour (72 km/h)! The “size charts” at that site are especially heinous and show a crudely rendered A. simus to have a shoulder height more typical for a proboscidean and its apparent nemesis Panthera atrox to be taller than most rhinoceroses. Illustrations by Mauricio Antón of both animals at a proper scale can be found here.

There is no denying that Arctodus simus was an enormous animal, but claims that it weighed a metric tonne or more are baseless. Christiansen (1999) used limb bone dimensions to calculate that a large male A. simus would weigh between 700 to 800 kg (1540-1760 lbs) and speculated that on rare occasions males could have reached or exceeded one tonne. I think visual comparisons can be highly valuable when dealing with speculative body masses and a mockup of a large A. simus and large polar bears (here) suggest that the estimates made by Christiansen (1999) are indeed rather excessive. Sorkin (2006) questioned the use of limb bone dimension regressions against mass since A. simus has proportionally long and robust legs; estimates based on condylobasal skull length gave a maxima of 570 kg (~1250 lbs) for the species. Since A. simus has a rather short skull I can't help but wonder how accurate condylobasal skull length would be in predicting mass - it should be noted that A. simus also has a short body and this weight estimate does at least look more on the mark visually.

Emslie and Czaplewski (1985) suggested that A. simus, which they though had a maxima of 620-660 kg, may have been beyond the physical limitations of an active predator. I'm not a big fan of using maxima, but since the maximal weights of unambiguous hypercarnivorous predators have been calculated they are actually useful in this situation. Panthera atrox has been given a maxima of 420 kg (925 lbs) based on condylobasal skull length and Smilodon populator "almost certainly exceeded" 400 kg (880 lbs) based on limb bone analysis (Sorkin 2008 - data from Turner and Antón 1997, Christiansen and Harris 2005). Since A. simus did not seem to be greatly in excess of those cats, I don't think active hypercarnivory can be ruled out on that basis.

Apomorphies such as a premasseteric fossa and a skull with a short, deep, and convex shape place Arctodus simus in the bear subfamily Tremarctinae, which includes the extant spectacled bear Tremarctos ornatus (Trajano and Ferrarezzi 1994). Arctodus and the exclusively South American Arctotherium are united as a clade of "short-faced bears" on the basis of wide molars and presumably other traits (a more foreshortened face?) (Trajano and Ferrarezzi 1994, Soibelzon et al. 2005). Arctodus simus shares its genus with the poorly known A. pristinus, which appears to be distinguished primarily by being smaller in size and appearing slightly earlier in the fossil record (Dalquest and Mooser 1980, Puckette 1976). The Great Bear Almanac claims that other apomorphies of A. pristinus include a "slightly shortened" face, large and high-crowned teeth, and very large canines.

Emslie and Czaplewski (1985) interpret the premasseteric fossa, typically found in large herbivores and small carnivores, as related to an enlarged zygomaticomandibularis muscle which allows for lateral grinding and jaw elevation. A seldom mentioned character is the enlarged radial sesamoid of tremarctine bears, which is apparently a plesiomorphic character shared with giant pandas (Salesa et al. 2006). Its use in Tremarctos ornatus isn't too clear, but it could be related to extensive food manipulation and/or a rather arboreal lifestyle for a bear (Salesa et al. 2006). Emslie and Czaplewski (1985) suggest that the elongated limbs of A. simus could be used to pull down vegetation and I think the retention of an enlarged radial sesamoid could tie in nicely with this hypothesis. Whatever its function, an enlarged radial sesamoid does not sound like a likely characteristic for an alleged cursory animal... 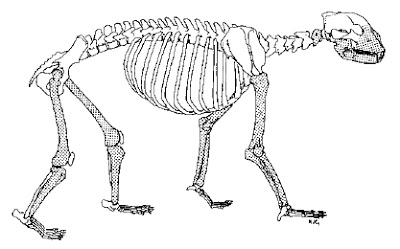 
Lots of Unlikely Characters for a Hypercarnivore

Some early Arctodus simus workers interpreted the bear as having an ecomorphology more similar to a felid than an ursid on the basis of a short and broad rostrum, large carnassial blades, long limbs, and a "possibly" more digitigrade stance (Christiansen 1999 - citing Kurten 1967 and Kurten & Anderson 1980). This hypothesis is the one that got stuck in the popular imagination (wonder why...) and still is despite the fact that Sorkin (2006) utterly demolished it. The sectorial carnassials, position of the mandibular condyle, and development of the angular process which were previously interpreted as evidence for hypercarnivory are all present in Tremarctos, a near-exclusive herbivore (Sorkin 2006). Buccal cusps on the upper molars of A. simus are shared with the largely herbivorous Kodiak bear (Ursus arctos middendorfi) (Sorkin 2006). Additionally, Sorkin (2006) noted that relatively short canines, small orbits directed somewhat laterally, reduced leverage of deltoid and pectoralis muscles (used to subdue prey), reduced development of the brachialis and brachioradialis muscles (used to grasp prey), reduced pronation of the forearm and the flexation of the wrist and digits (used to grasp prey), a short and bent olecranon process (reduction of ability to crouch), brown bear-like lumbar vertebrae with limited flexion in the sagittal plane (meaning slower acceleration and top speed) all indicate that A. simus was not an active predator.

Matheus (1995) suggested that carbon and nitrogen isotope evidence indicated that A. simus was highly carnivorous, but functioned primarily as a scavenger adapted for long distance walking/predator intimidation. The only known vertebrate obligate scavengers are large soaring fliers and while a large terrestrial scavenger is not energetically infeasible per se, the hypothetical niche could only have evolved in an environment without vultures (Ruxton and Houston 2004). Furthermore, the isotope range overlaps with Pleistocene brown bears (Ursus arctos) and it does not appear that a hypercarnivore and omnivore with a diet including terrestrial mammals can be distinguished from isotopes (Sorkin 2006).

One of the aforementioned inspirations for this post was another recent re-evaluation of A. simus morphology by Figueirido et al. (2009), which I can't believe I'm just getting around to now. Modern faunivorous bears, the insectivorous sloth bear Melursus ursinus and the carnivorous polar bear Ursus maritimus, have long and flat skulls with frontalized orbits, downwards directed zygomatic arches, a slender jaw with small movement arms for the temporalis and masseter muscles and poorly developed upper and lower tooth rows (Figueirido et al. 2009). The vastly different prey of the two bears and their apparent convergences would seem to suggest that if A. simus were hypercarnivorous, it would at least display some of these characters. Herbivorous bears, the spectacled bear and the giant panda, have a short jaw with large movement arms for the temporalis and masseter, a horizontal ramus deep at the level at the level of the third molar and shallow below the canines, well-developed cheek teeth, small canines, well-developed zygomatic arches, and lateralized orbits (Figueirido et al. 2009). Even though those are the two most basal bear species, the fossil record appears to indicate that they developed these traits independently rather than retained them (Figueirido et al. 2009). Arctodus simus does not group with either of these ecomorphs, but falls in the middle with generalized omnivorous ursid species (Figueirido et al. 2009). Sorkin (2006) reached a similar conclusion and thought the bear could be compared with the striped and brown hyenas (Hyena hyena and Hyena brunnea) and may have had a diet consisting of large animal carrion, small animal prey, and plant material. Figueirido et al. (2009) suggest an even more thorough ecomorphological study including other carnivorans should be done with A. simus, but conclude that it was likely an omnivore capable of dealing with with seasons and climactic cycles. Of course, even animals with a highly plastic diet aren't immune to extinction.

So that's about all I want to say about Arctodus simus - I have no idea why this post took to write as long as it did. There is little doubt that some less-enlightened members of the media will continue to erroneously portray this animal as a hypercarnivorous terror, but hopefully the alternate (and more parsimonious) suggestions will gain some attention.

Emslie, Steven D. and Czaplewski, Nicholas J. 1985. A new record of the giant short-faced bear, Arctodus simus, from western with a reevaluation of its paleobiology. Natural history of county contributions in science 371, 1-12.

Figueirido, B. et al. 2009. Ecomorphological correlates of craniodental variation in bears and paleobiological implications for extinct taxa: an approach based on geometric morphometrics. Journal of Zoology 277, 70-80.

Trajano, E. and Ferrarezzi, H. 1994. A fossil bear from , with a phylogenetic analysis of the South American extinct Tremarctinae (Ursidae) Journal of Vertebrate Paleontology 14, 552-556

Posted by Cameron McCormick at Saturday, March 21, 2009
Email ThisBlogThis!Share to TwitterShare to FacebookShare to Pinterest

I am always surprised how some paleontologists can estimate weights for extinct animals which are much too high or much too low. I think weight estimations based only on single parametres of bones can be highly speculative, especially if it is used for animals with no close modern relative. One of the best methods is surely the mass calculation with miniature models. Using the known volume and average density of animals, this should produce mainly realistic dates. I think it makes also a lot of sense to make direct size comparisons with known animals of known weights. If Arctodus is portrayed with modern pears, normally only small bears are shown, but compared with the largest known Arctodus. The size comparison Daniel made is much better, and it clearly shows that Arctodus did not exceeded the largest polar and brown bears in weight. And even a shoulder heights similar to those of the largest Arctodus were already recored for brown and polar bears.
I just came across a paper about Gryphosuchus croizati, a giant south america gavialid. It is only known from its huge skull, but the complete length was estimated to be around 10m. So what´s no really strange is the estimated weight. They used the braincase-length for weight calculation and came to 1280-2379kg with the average of 1745kg. This seems to be really a really inaccurate method, because the lower estimated weight is not really much more of the giant hybrid Yai which weighed more than 1000kg at 6m, and the giant salties from Orissa certainly even exceeded this weight. The monster croc whose skull is stored in Paris and which was in th 7-7,5m region was most probably already in the same weight class as this estimated weight for the much longer Gryposuchus.

What is known about Agriotherium? I had seen it compared to Arctodus.

Wikipedia claims that Agriotherium was a 1000 kg bear-like hemicyonid - but this is bullshit since Turner and Anton reconstructed A. africanum with a shoulder height of 1.3 m and everybody regards this as an actual ursid (in an extinct subfamily).

As I mentioned all the way back here, Sorkin reconstructed A. africanum with a weight of >500 kg (I'm assuming there were specimens taller than 1.3m?) and noted similarities is cranial and dental features. Oh, there were other Agriotherium species outside Africa, include some in North America - I'll admit I don't know very much about them.

Hi!, congratulations for your post on A. simus, you used new and well documentated information. If you want you could e-mail me and I will send you my new articles on Arctotherium species, I think that you could be interested particularily in one about the ecomorphology of Arctotherium that is in press now.
Best regards
Leopoldo