It is not Giganotosaurus, a late Cretaceous carcharodontosaurid theropod rivaling Tyrannosaurus for size. As Google shows us, the confusion is widespread.

My interest in Gigantosaurus stemmed from this illustration:

From the 1932 edition of the Meyers Blitz-Lexikon
It is one of the more ridiculous I've seen, just look at those hind limbs! But hey, at least it isn't wallowing in water. I'm not sure how long that locomotive is (I'll have to ask my dad)* but if we assume the human is 1.8 m tall, the dinosaur's head is 4 m long (13'), the length of the forefoot is 2.3 m (7.5'), the highest part of the body is 12 m (40') off the ground and the total length is probably over 60 meters (200'). This is even bigger than Amphicoelias fragillimus according to Carpenter (2006) and it could be the largest sauropod ever depicted. From the original German source I was able to discern that this was an East African sauropod and it was apparently larger than Diplodocus.

*About 36.5 feet long and 15 feet high. This puts the guy in the 1.7's somewhere and makes the dinosaur somewhat smaller but, it's still crazily oversized!


There is currently no valid dinosaur species named "Gigantosaurus", so what does this illustration depict? The mention of East Africa directs us to the German Tendaguru expedition of 1909-1913 where Fraas described Gigantosaurus africanus and G. robustus. "Gigantosaurus" was argued to be occupied by a later author who moved the dinosaurs into the genus Tornieria and changed their specific names (T. africana, T. robusta); later T. africana got moved to the genus Barosaurus and T. robusta became Janenschia robusta (Remes 2006). A third member of the genus (G. dixeyi) was named 20 years after the others and now occupies the genus Malawisaurus (Jacobs et al. 1993). The illustration did not mention a species but I don't think it's so much a composite of the different genera as it is a product of active imagination and limited understanding of sauropod morphology. And probably scaling as well. 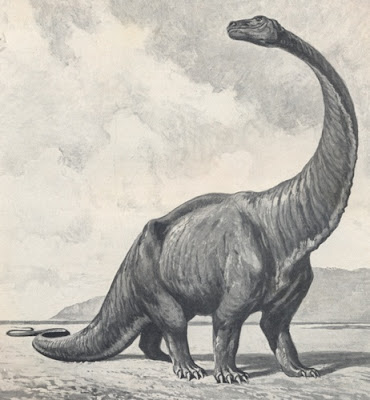 A 1912 (cropped?) drawing of "Gigantosaurus" by Heinrich Harder, taken from here. Note the tail stretching into the horizon and the very wrong hands. That link does specifically address Janenschia, by the way

As for the former members of "Gigantosaurus", Tornieria is now a valid genus of diplodocine diplodocid diplodocoid once again, it appears to be the sister group to Barosaurus + Diplodocus (Remes 2006). Contrary to the scale the drawing suggests this was not a mega-sauropod or super-sauropod, femoral length suggests a similar length as Diplodocus (Remes 2006). As far as the shape of the animal, it had elongated cervicals like Barosaurus but retained the trait of proportionally short hindlimbs with a tibia:femur ratio similar to Apatosaurus (Remes 2006). From a biogeographical perspective, Tornieria is unusual since it is the only diplodocid from the upper Jurassic of Gondwanaland (aside from other "Barosaurus" remains) and suggests that other species remain to be discovered (Remes 2006). 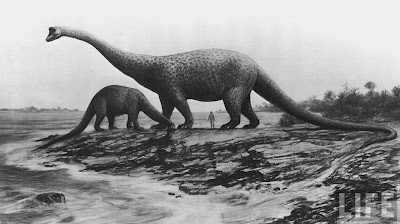 A 1930 illustration of "Gigantosaurus africanus" (= Tornieria africana) and Diplodocus. Note that in real life, the two dinosaurs are actually about the same size! The Hairy Museum of Natural History alerted me to the existence of this photo, which was put online by LIFE and Google.

The other two genera are quite distinctive from the diplodocid as they appear to be titanosaurids. Janenschia is from either the late Jurassic or early Cretaceous and while it has been classified as a basal titanosaurid in the past (and sometimes camarasaurid), it has not been subjected to recent phylogenetic analyses (O'Leary et al. 2004). Whatever it is, Janenschia appears to grow at a blazing 663-993 kg/year (titanosaurids seem to have been fast growers) and could have reached its adult size of ~14 tonnes in 20-30 years (Lehman and Woodward 2008). That's probably slightly more than Diplodocus (or Tornieria?) weighed, but come on, terrestrial mammals have attained similar sizes. Malawisaurus is from the late Cretaceous and is clearly a titanosaurid (based on strongly procoelous anterior caudals), and is in fact a relatively basal one (Jacobs et al 1993, Wilson 2006). One cervical vertebrae as described by Jacobs et al. (1993) was 41 cm tall (with spine and all) and I'm not thinking that belonged to a very large sauropod. Some pages claim a length of 9 m, but didn't explain where they got their figure from.

So what is the original "Gigantosaurus" which caused the name changing? Gigantosaurus megalonyx was described by Seeley in 1869, quite early in our knowledge of sauropods since Astrodon was first described in 1865. From the scraps of information I've gathered, it was described from sacrals, a radius, tibia and fibula and unsurprisingly was not given a sufficient description. It is currently listed as indeterminant and probably the same as other sauropods from the area. So while it was unfortunate that a nomen dubium did not allow for the use of Gigantosaurus, the genus would have split up anyways - plus, it wasn't the most appropriate name in the world.

I also found that the name "Gigantosaurus" has been attached to this illustration: 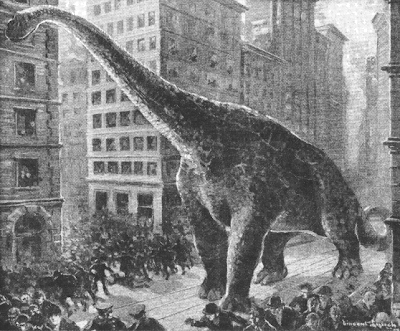 It was taken from the Copyright Expired page and was apparently drawn by Vincent Lynch in 1914 and published in Scientific American. It looks like a scene from the Lost World, which was allegedly filmed over a decade after this was drawn. Could these be an early instance of the dinosaur-running-amok-in-a-city theme? Whatever the case, it also seems to be drawn horribly out of scale. Interestingly, this image (and its less exciting cousin) has also been labeled as the brachiosaurid Pelorosaurus. That genus has no known synonymy with Gigantosaurus, and is presumably either an informal nickname or a mistake of the website author.


This post originated from a comment at The World We Don't Live In. It was originally intended to be a "picture of the day"-type post but quickly spun out of control.

Remes, Kristian. 2006. Revision of the Tendaguru sauropod Tornieria africana (Fraas) and its relevance for sauropod paleobiogeography. Journal of Vertebrate Paleontology 26, 651–669

That second image looks within the size range of the largest brachiosaurs in linear dimensions, albeit depicted as more robust than they actually were: i estimate its head as being about 50-60ft off the ground, and Wikipedia says Sauroposeidon could lift its head c. 56ft.

Was Diplodocus really that light? That's incredibly surprising to me - it means a small adult Diplodocus could be lighter than a large adult living African elephant...

Weight estimates for Diplodocus ranged from about 11.7-18.5 tonnes and
Wedel (2005) arrived at about 12 tonnes (~13 tons) by taking pneumaticity into account. While Loxodonta africana rarely, if ever, exceeds 10 tons, average Mammoth trogontherii, Deinotherium giganteum and Paraceratherium were probably around the weight of Diplodocus. Well, not D. hallorum.

I also figured the second illustration was about Sauroposeidon size, I think Pelorosaurus was about the same length as Brachiosaurus but I haven't seen any figures for height. Incidentally, I couldn't help but notice in the Amphicoelias paper that Sauroposeidon was looking awfully low to the ground at ~11-12 m - was this to save space or were there some revisions I was unaware of? A head ~17 m off the ground is just nuts...

Gigantosaurus is an appropriate name for any sauropod, frankly.

I *think* (but I'm not sure) that the Scientific American image was from an article showing dinosaurs in the city for the purposes of scale. I'm probably wrong, though.

It's not too late to own your very own dinosaur (as seen here http://theworldsbestever.com/blog/wp-content/uploads/2008/02/kota-dinosaur.jpg) Then you get it on a scale and weigh it with no controversy!

Nice work on this post -- everything here looks right to me, with the exception that there is now a second Tedaguru-Formation diplodocine, Australodocus Remes 2007.

Pelorosaurus is not brachiosaurus-sized, no: it's known from a single humerus which is abnout 1.4 m long, compared with 2 m plus in both Brachiosaurus and Giraffatitan. So assuming isometric scaling, it would be about 70% as long and 1/3 as heavy. Mind you, that humerus could be from a younger individual than the B. and G. holotypes (which are themselves not fully mature).

On the credible height of Sauroposeidon, see this SV-POW! post. I ended up concluding that 20 m was not out of the question.

Did you know that that you can make cash by locking special pages of your blog or website?
Simply open an account with AdWorkMedia and implement their Content Locking widget.