It was twelve feet long, of slender and graceful build, with a cruel, thin-lipped muzzle and formidable fangs in the front of the jaws; a curiously prehistoric looking beast, despite its beautiful coat. That it was a dangerous animal was proved by the fact that we found in its stomach large balls of hair, three inches in diameter - the remains of crab-eating seals that it had devoured. As these balls were of hair and not fur, it was evident that the sea-leopard's victims were not mere babies. I can well imagine that such a beast would give rise to sea-serpent stories, for, seen from a little distance rearing two or three feet out of the water, shooting forwards and retracting its head (a characteristic movement) it would resemble a serpent more than a mammal.
- Endurance: An Epic of Polar Adventure by Frank Worsley

The sporadic media appearances of Hydrurga leptonyx cast them as fearsome, penguin-eviscerating, reptilian monsters. I don't believe in monsters - behind reputations like these are animals which are not fully or properly understood. Hydrurga and other Antarctic pack-ice seals happen to be the most poorly known phocids for obvious logistic reasons (van den Hoff et al. 2005). I wouldn't say that there's a dearth of information on Hydrurga compared with some taxa, but it is a rather cryptic species and a lot of its basic biology needs clarification.

I feel obliged to add how annoyed I am by lazy statements like "such and such taxa is behind sea serpent reports" - I can't recall any southern hemisphere "sea serpents" sounding anything like Hydrurga. 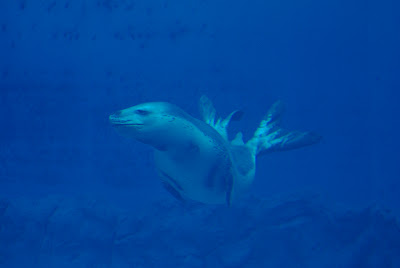 A Creative Commons photo of a leopard seal, from Crouchy69's Flickr

Hydrurga is a phocid ("earless seal") and a member of the clade Monachinae; molecular evidence suggest that monk seals (Monachini) are basal members of the clade which also includes a sister group of elephant seals (Miroungini) and other southern seals (Lobodontini) (Arnason et al. 2006, Higdon et al. 2007). The relations within Lobodontini are more contentious, cranial morphology (e.g. those bizarre teeth) suggests a close relation between Hydrurga and Lobodon ("crabeater" seals) but molecular evidence suggests Hydrurga is allied with Leptonychotes (Weddell seal) instead (Davis et al. 2004, Arnason et al. 2006, Higdon et al. 2007). Lobodontini seems to have undergone a rapid radiation, perhaps a mere 7 million years ago, which may have caused this phylogenetic confusion (Higdon et al. 2007, Davis et al. 2004). With fossils taken into account, it appears that the bizarre late Miocene/early Pliocene Acrophoca is the closest relative of Hydrurga (Walsh and Naish 2002) - more information on the bizarre "swan-necked seal" can be found on Darren's old blog.
Animalian size is an inevitable topic for this blog and I feel obliged to note that Hydrurga is probably* the largest lobodontin and is certainly among the larger pinnipeds. It is common for sources to claim that Hydrurga is sexually dimorphic and typical figures for maximum size are 3.4 m (11') and 450 kg (990 lbs) for males and 3.6 m (12') and 590 kg (1300 lbs)** for females (Reeves et al. 2002). I'm of the opinion that maximum measurements are highly misleading outside the context of averages and cannot justifiably be used except in the most dire of data-deficient situation, e.g. with some ziphiids. Furthermore, sexual dimorphism was not observed in the 77 individuals measured by van der Hoff et al. (2005) and the previously reported "dimorphism" is probably insignificant enough to have been an artifact. It's unfortunate that van der Hoff et al. (2005) do not establish an average STL with their data - however we do know that Cave and Bonner (1987) consider a 2.52 m (8'3") STL specimen immature and Visser et al. (2008) use 3 m (~10' - EL?) as an average. van der Hoff et al. (2005) do establish equations and methods for assessing body condition and mass of Hydrurga, which comes in handy since this species has a rather high mortality rate when anesthetized.
* van der Hoff et al. (2005) state that among Antarctic seals only Mirounga reaches larger sizes, but I'm not completely sure if Leptonychotes weighs more on average.
** Bizarrely, these maximum figures are understatements rather than exaggerations - Higgens et al. (2005) state that the maximum weight is 650 kg (1432 lbs). Muir et al. (2006) note that the leopard seal which killed Kirsty Brown in 2003 was estimated to be a staggering 4.5 m (14'9") in length. Assuming that the STL was something like 4 m, the seal would have been ~825 kg (1800 lbs) in good condition. Muir et al. (2006) assume this animal was female, but there is no strong evidence for sexual dimorphism.

As illustrated above, Hydrurga has post-canine teeth with cusp complexity second only to Lobodon. While the cusp development may not be homologous*, both genera use their teeth to strain krill from the water (Nowak 1999). While Nowak (1999) stated that krill takes up 45% of Hydrurga's prey biomass, this has been contradicted; Walker (1998) found krill from only one scat in 45, Hall-Aspland and Rogers (2004) reported krill in 4% of scats and some male leopard seal stomachs, unpublished isotope data from Hall-Aspland further suggested krill is not a major food item and diving data from Kuhn et al. (2006) suggests that krill is not consumed by juveniles in winter (as was previously thought). It doesn't make sense for Hydrurga to have highly specialized dental morphology for capturing krill on rare occasions, so there must be instances where euphausiids play a critical role in the diet of the species...

* Since neither Leptonychotes or Acrophoca has these accessory cusps. Alternately, the cusps could have been lost several times.

Leopard seals are well known for taking large, homeothermic and occasionally human-sympathetic prey. In one recorded instance, Hydrurga exhibited predatory behavior on a human who was ultimately killed (Muir et al. 2006). Evidence of Hydrurga predation can be found physically in the form of scars on many adult Lobodon (Nowak 1999) - the number of predation attempts must be staggering since there are millions of Lobodon. Hall-Aspland and Rogers (2004) looked at the summer diet of east Antarctic Hydrurga and found that it mostly consisted of Adelie penguins (Pygoscelis adeliae) with Lobodon, fish, amphipods and krill as supplements. Prior studies cited by that paper of Antarctic peninsula Hydrurga found that gentoo penguins (Pygoscelis papua), macaroni penguins (Eudyptes chrysolophus), Antarctic fur seals (Arctocephalus gazella), fish, squid and krill were taken during summer but only krill and fish were consumed during winter. So it looks like krill is important for at least some populations, or individuals in certain locations. Even with a dentition having specializations for taking krill, Hydrurga is capable of an impressively broad diet which probably capitalizes on local abundances. One article cited by Forcada and Robinson (2006) hypothesized that the catholic diet of the leopard seals allow them to have a flexible breeding strategy with less seasonality and a shorter breeding cycle.

While Hydrurga occupies a rather high trophic position and can even prey on other pinnipeds (normally as juveniles), it is not immune from predation. One abstract mentions a tiger shark (Galeocerdo cuvier) caught off Rio de Janeiro with a Hydrurga in its stomach, but an individual from that far north was probably a juvenile in poor condition*. Authors in the past have suggested that Orcinus can prey on Hydrurga and this has been observed by Visser et al. (2007). Since Hydrurga is a rather cryptic species that spends far less time on ice floes than Lobodon, it seems likely that this is a rather rare event.

Understanding the ecological significance of Hydrurga is complicated by the difficulty of estimating how many individuals there are. Recent aerial surveys between 64 E and 150 E off east Antarctica observed only 29 Hydrurga individuals and extrapolated a populations of 3700-23,400 (Southwell et al. 2008). A previous survey in a somewhat comparable area (90 E to 160 E) estimated 68,000 animals and Southwell et al. (2008) noted a concurrent acoustic survey which detected Hydrurga in 98% of 54 acoustic sites yet only saw in 2%. Southwell et al. (2008) appear to conclude that Hydrurga is cryptic rather than very rare and it looks like a more robust survey method is needed. Somehow, prior sources came up with population figures in the hundreds of thousands, e.g. 400,000 in Nowak 1999. Hydrurga in Tasmania were assumed to be vagrants in the past, but sightings between July and November (i.e. winter and spring) have included animals in good condition so they're a natural part of the fauna (Rounsevell and Pemberton 1994). Other temperate areas should be investigated to determine if Hydrurga is a cryptic resident rather than an occasional straggler.

I think that's about it for Hydrurga; while this isn't a poorly known species, many basic aspects of its biology need clarification. The species does lend itself to some interesting videos:


No wonder this took me so long to write...
Posted by Cameron McCormick at Saturday, November 29, 2008
Email ThisBlogThis!Share to TwitterShare to FacebookShare to Pinterest

I love the endearingly naive commentators who start theorizing about extinct seal species and waitoreke synonymy without, you know, bothering to check out what seals live in the area. It's definitely a description of Hydrurga, although I personally wouldn't describe it as having a calf-like muzzle. The species was only discovered 28 years before so it's understandable that people in southern Australia were quite unaware of the cryptic, seasonal resident.

Heuvelmans mentioned a "sea-leopard" caught in the Shoalhaven river (NSW) with a platypus in its stomach - now that is definitely a vagrant.

Well, the skull in general looks like a Therian mammal, but those post-canine teeth look like a Triconodont's. Or Volaticotherium's. (Grin!)
---
Nice article: thanks!

Interesting post Cameron. I'll be perfectly honest about the fact that Leopard seals creep me out. I'd always been quite interested in diving with one but after watching a zoo specimen for quite a while it put me right off that idea. I'll stick to my sharks any day.

I've been terrified of leopard seals ever since I read an account of Shackleton's ramblings in the Antarctic. Things are dangerous!

WOw.. very interesting!
I'm studing stuff realted to this issue in the university in argentina (Where I am a student for this year), and I love to know more about it. Thanks for sharing this, I'll show it to the class.

As a cheater your heart has failed, fooling me like the others, if I quickly realized it would certainly be more hurt