Relative to other cephalopods, octopuses are reported with abnormal appendages* much more frequently. Symmetry and streamlining do not appear to be issues for animals that jet around infrequently and spend most of their time as benthic crawlers. It isn't fair to assume that every octopus is a benthic crawler, but as far as I can tell no pelagic octopuses were reported with abnormalities. Octopuses also seem capable of coping with arm morphologies quite divergent from the norm, one author reported seeing octopuses in the wild with the greater portion of seven arms missing (Toll and Binger 1991).
* The appendages are known as arms, regardless of how they're used. One recent study, which has not yet been peer reviewed as far as I can tell, reports that octopuses use arm pair IV as "legs" - but they primarily studied Octopus vulgaris and it is perfectly conceivable that different species have specialized their arms for different purposes.


Octopuses with subnumerary arm counts unrelated to natural losses have been reported. An article cited by Toll and Binger (1991) (Gleadall 1989 - see further reading) documented an Octopus sp. with seven arms*. Earlier this year it was claimed that the first "hexapus" was discovered, but somebody didn't bother checking the literature because I quickly found a description of a hexapodous specimen by Toll and Binger (1991). The aberrant Pteroctopus tetracirrhus entirely lacked arm pair II and there was a single adoral (near mouth) sucker located on the web between arms LI and LIII (Toll and Binger 1991). Arm pair I was observed with several other abnormalities: LI was narrower and shorter than RI, three of the first five suckers on LI were abnormally small, in the first ten rows of suckers on RI one third of them were abnormally small and there was widespread misalignment - some areas were even roughly tri-serial (Toll and Binger 1991). The authors reported that otherwise the specimen was normal and the abnormal appendages did not show signs of regeneration.

* Not to be confused with male Haliphron atlanticus


Octopuses with abnormally high counts of arms have also been reported. The Pink Tentacle posted on an octopus with 9 arms, which either has an extra RI or LIV (where's a hectocotylus when you need one?). The limb may be "split" off from another, I'll discuss this below. Kumph 1960 cited an earlier study (Parona 1900 - see further reading) which described an O. vulgaris with two thin arms in the place of LI and an Eledone cirrhosa* with an arm in between RII and RIII. Toll and Binger (1991) described the first decapodous octopus**, a lab-raised O. briareus which had a repeated arm pair IV. All of the arms were evenly spaced around the branchial crown, but the octopus still had a couple of other abnormalities. Male octopuses have a specialized arm for spermatophore transfer (RIII*** - the hectocotylized arm) and the Toll and Binger specimen had a supernumerary spermatophoric groove on LIII with no hectocotylus. A supernumerary diverticulum of the penis was also present.

* Toll and Binger 1991 cite this specimen as E. moschata, describes it as E. aldrovandi. Gonzalez and Guerra note that the species name has been changed.
** I can't help but mention the fact that there are octopodous decapods. Theirs' is a natural condition, however.
*** Some species have a hectocotylized LIII (Palacio 1973).


Abnormal hectocotylization is another abnormality recorded in octopuses. Palacio (1973) discussed some prior cases: hectocotylization was reported on RIII and LIII from an Eledone cirrosa (Appellof 1892 - see further reading) and on RIII and LII from Octopus briareus (Robson 1929 - see further reading). Palacio (1973) reported an O. vulgaris with hectocotylized RIII and RIV and an O. selene with hectocotylized RII and RIII. The extra hectocotylized arms all manifest with roughly the same morphology, they are not diminished in size and have proportional differences compared to the normal arms (Palacio 1973). Unlike the Toll and Binger decapodous octopus, none of these four specimens exhibited abnormalities with the genitalia (Palacio 1973). Palacio (1973) speculated that the extra hectocotylized arms were functional and were likely the result of mutations in sex-linked genes. It seems really odd that the mutation would occur on different arms each time, but how the hectocotylus wound up on RIII (for the most part) also seems rather odd. Another paper (Jereb et al. 1989) has discussed bilateral hectocotylization, but not exactly in a language that I can read.

So far I've only mildly alluded to the commonest and most bizarre condition that occurs in cephalopod arms - splitting. Bifurcation has been observed recently in the tentacle clubs of Onykia (= Moroteuthis) ingens by Gonzalez and Guerra (2007); polyfurcation was observed not-so-recently in the arms of a cuttlefish (Okada 1937 - see further reading). As can be predicted, octopuses are far more prone to demonstrating this trait - 7 were captured off Japan from 1884 to 1964 (Okada 1965a). Kumph (1960) described a bifurcation in LIII from O. briareus, both of the new arms had a biserial series of suckers and there was some webbing in between them. Kumph rejected the idea that it was the result of injury and interpreted it as a mutation or developmental oddity. This is a rather mild defect compared to some.

Around 8 years ago I found some diminutive quasi-cryptozoology book in a library (the downtown Naperville library) and I recall being extra dubious of the claim that octopuses have been found from extra "tentacles". Besides Toll and Binger (1991), the genesis of this post was a link my sister sent me to a post from Pink Tentacle which showed octopuses with up to 96 branching "armlets". The pattern of branching is quite complex: bifurcations have a continuous series of suckers, trifurcations have side branches with independently developed sucker series, then there are dorsal bifurcations, dorso-lateral mixed branching, dorsal branching and subcutaneous branching (with no suckers) (Okada 1965a, 1965b). Toll and Binger (1991) suggested that Okada's data indicates that the branching is not a random event. All of the specimens that Okada looked at were Octopus vulgaris from Japan, but it could be possible that this is due to sampling bias. If there is a regional tendency to be crazily polyfurcated I have no idea why. 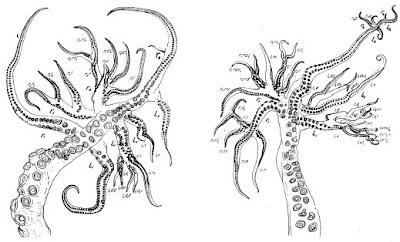 So what could possible cause these anomalous appendages? Gonzalez and Guerra (2007) note that in limb regeneration, an Apical Epidermal Crest covers the severed organ and Hox genes are activated to reproduce a limb as it was in the embryo. In their Onykia specimen, the tentacles appeared to have been regenerated but with clubs only (and bifurcate ones at that) - as such it had to get by with arms only (Gonzalez and Guerra 2007). Toll and Binger (1991) brought up amphibian regenerations with (surgically induced) supernumerary distal limb development but didn't reach firm conclusions on its relevance. These appendage abnormalities are likely due to developmental defects and/or regenerative difficulties, but the literature still is scant and I'm sure there's a lot more interesting work to be done.

Before I go, I should mention that five pairs of arms appears to be the ancestral conditions for cephalopods, including Nautilus. Pairs I and II turn into parts of the hood (!) and III-V turn into digital tentacles. I should probably mention the ocular and buccal tentacles in Nautilus which are not of homologous origin to these. Since there appears to have been a polyfurcation event in the past (albeit a less haphazard looking one), this could support the idea of some appendage anomalies being wholly genetic.

Further Reading:
For those with better access to materials than me 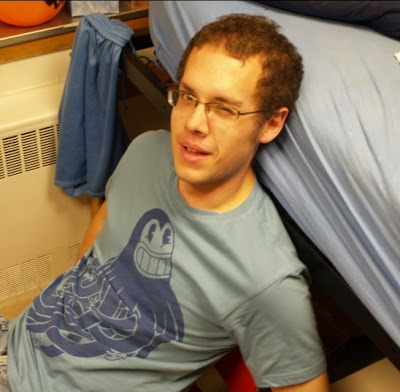 Oddly enough, I have a somewhat relevant shirt featuring an octadecapodous octopus. I got it from yonder (I feel contractually obliged). I also feel obliged to say that this was the best of several pictures, yeesh.
Posted by Cameron McCormick at Sunday, October 05, 2008
Email ThisBlogThis!Share to TwitterShare to FacebookShare to Pinterest

That is awesomely bizarre.

Nice interesting things, really i dont understand so well the inglish but i love cientific filosofy, protoplasmic paint. Salut from Barcelona! Ah! if you need some illustration, we can talk about. thanks!

cameronmccormick.blogspot.com; You saved my day again.