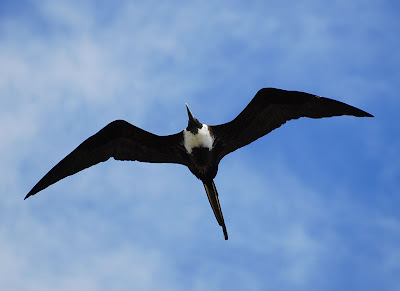 Frigatebirds are pretty high up there on animals I'd like to see some day. Two of the five species have been seen in New England, but encounters are so rare that I'll probably have to bother going elsewhere, sigh. Prior posts documenting my taste in art and fascination with Big Animals makes the appeal of these dark, angular and somewhat monster-y birds fairly obvious. Superficiality aside, these are some very impressive animals.

The five living species of Fregata are classified as Pelecaniformes in the family Fregatidae, although beyond that things have been rather murky. These aren't "core Pelecaniformes" (darters, gannets, cormorants), but frigatebirds may be a sister group to a clade containing the core plus pelicans and tropicbirds (Kennedy & Spencer 2004). All of these groups have four toes joined by webbing, a gular sac and pre-landing vocalizations, and like all major groups their monophyly has been questioned. My previous blogging on bird phylogeny taught me that large-scale relations between groups right now is, well, a bit confusing. Focusing in a bit, it is worth pointing out that until the early 20th century there were only two species of frigatebird: the small and distinctive F. ariel (the lesser/least frigatebird) and F. aquila. The latter species was split into four superficially similar species, possibly grouped into two pairs of similar species (F. minor/F. andrewsi and F. magnificens/F. aquila) according to Kennedy and Spencer. Interestingly all the species appear to have diverged as recently as 1.5 million years ago despite having a fossil record that goes back 50 million years (Kennedy and Spencer 2004).

The first possible member of the family is Volgavis marina from the Uppermost Maastrichtian (presumably around 65 mya) of Eastern Russia (Buffetaut et al. 2002). However, another paper (which I can't find) apparently considered it a graculavid charadriomorph and the fact that Kennedy and Spencer don't mention it is worth something too. The early Eocene of Wyoming has the first definite frigatebirds: Limnofregata azygosternon (first described in 1977) and L. hasegawai (2005). L. azygosternon was the smaller species with a proportionally shorter bill and proportionally larger tibiotarsus; the size range between the species and tibiotarsus proportions are reminiscent of modern Fregata (Olson and Matsuko 2005). All the specimens of L. azygosternon seem to be very consistently sized, so it is unlikely that this early genus had the same sexual dimorphism (with larger females) as Fregata. Despite being small, the feet of this genus could still be theoretically used as paddles; coupled with the lack of dimorphism this group seems reminiscent of gulls from the genus Larus. Presumably there are other anatomical features that the authors didn't explicitly mention. Aside from Quaternary remains, this snapshot in time is all we know about the evolution of frigatebirds. So what did this group do in their impressive ~50 million year ghost lineage? Olson and Matsuko speculated that cooling in the mid-Eocene and the evolution of gulls in the Late Oligocene put the frigatebirds into their current tropical, pelagic niche. I haven't seen more than 5 species of Fregata listed anywhere, so presumably the Quaternary species were the same (or very similar to) the modern ones.

During the course of their nebulous evolutionary history, frigatebirds became some of the most impressive fliers known. The great frigatebird (F. minor) has been known to spend as much as 12 days on the wing (Weimerskirch et al. 2004) although there is no evidence they (or any other birds) can actually sleep on the wing (Rattenborg 2006). Albatrosses, for comparison, also spend most of their lives on the wing but they have been known to sleep floating on the sea (Rattenborg 2006). It isn't clear if frigatebirds actually can land on the surface of the water. Mahoney 1984 got some frigatebirds wet and set them on water; it turned out that only half of the males (10% less massive than females) managed to take off, and with great difficulty at that. Since the studied frigatebirds could still fly wet when thrown into the air, Mahoney concluded that the short legs with vestigial webbing and the wingspan (2-2.4 m or 6'6" to 7'10") constrained the birds from taking off in water. Food that isn't stolen from other birds (kleptoparasitism) and fisheries is taken through surface dipping (well, not flying fish) (Calixto-Alberran and Osorno 2000). Feeding from a medium that may not be escapable is certainly a testament to the flying abilities of frigatebirds. Exactly how frigatebirds spent their time on the wing was a mystery until quite recently (2003) when it turned out that they moved in a succession of climbs and descents powered by thermals (generally used by land birds) at both day and night and can fly as high as 2,500 meters (8200 feet) (Weimerskirch et al. 2003). Since feeding opportunities are limited in unproductive waters, frigatebirds don't spend much time near the surface of the water (which is probably for the best). Weimerskirch et al. 2003 further notes that frigatebirds weight only 1.2-1.5 kg (2.6 to 3.3 lbs) and even with narrow wings still have the lowest wing-loading of any bird species*. This, coupled with the longest period of parental care of any bird species and a very long life expectancy (30+ years) are further examples of their adaptations to tropical and unproductive waters.

*I wonder if any pterosaurs came close. Quetzalcoatlus is occasionally estimated as (insanely) low as 50-100 kilograms, but Mark Witton compellingly tells us why this is not so. Oh yes, and I'm convinced many modern day "pterosaur" sightings are of our friends, the frigatebirds (and turkey vultures, and pelicans, et cetera). 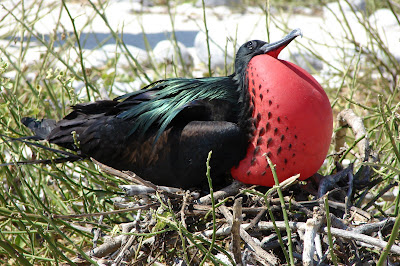 Male Great Frigatebird (F. minor) from Wikipedia Commons. I tend to only look at pictures on Wikipedia, I hope I'm not posting exactly the same information...

The sexual dimorphism in frigatebirds is a bit, well, confusing to me. As stated before, males are considerably less massive than females, yet for some reason they have those balloon-like gular pouches used for display. In a nice free article, Dearborne et al. note that uneven parental care and extra-pair fertilizations expected with a dimorphic male don't occur in frigatebirds. There was, however, a greater number of males so presumably this skewed operational sex ratio was the cause of the gular pouches and display behavior. But what about the size? Schreiber and Schreiber note than many of the characteristics seen with larger females in other birds (polyandrous mating, males using agility to attract mates, maintenance of pair bond) are not seen here and they couldn't quite reach a conclusion. The idea that the different sizes (and wing loading) allow the genders to have a sort of ecological segregation. I haven't seen any followups to this, and since dimorphism in boobies is also unexplained, I'm guessing this is still an open mystery. Well, unless there's something I missed.


Oh, and I accidentally left the Guinness Book of Animal Facts and Feats in Maine, dangit. I do recall some passages about frigatebirds reaching tremendous speeds (in storms) and....a claim that they are used as some sort of homing bird on some tropical islands. Wow.

Maybe I'll end on a happier note next time.

Calixto-Alberran, Itzia and Osorno, Jose-Luis. 2000. The diet of the magnificent frigatebird during chick rearing. The Condor 102:569-576.

You do seem to be attracted to rather strange things. These birds seem pretty normal by comparison.

Good luck trying to see one, I would recommend a zoo.

I learned today that turkey vulture vomit on you when they feel threatened. I have not learned how to make a turkey vulture feel right at home...therefore I hope never to be in vomiting range of one.