Simply put, the stem-group synapsids are a fascinating group that has been incredibly overlooked by popular culture. We are synapsids, but it seems like the only stem-group species widely known is the early Permian pelycosaur Dimetrodon. As the Permian progressed, synapsids diversified into many groups ranging from carnivores to herbivores, the size of a rat to species over a ton. After the end-Permian extinction wiped out most groups and the archosaurs became the dominant land animals, a group of cynodonts evolved into us crown-group synapsids (mammals). While not as "spectacular" as the dinosaurs, archosaurs and other diapsids, they are relevant to our own evolution - and they're fairly bizarre looking to boot. Stem-group synapsids are unfamiliar enough that they're not even blessed with a halfway decent common name. They've been called "mammal-like reptiles", but this is deceptive since they didn't evolve from reptiles and don't have any of their derived characters. Some of the proposed names include "Protomammals", "Paramammals" and "Stem-Mammals"(a discussion is here), but the one I chose for the title is still the best in my opinion.
I've wanted to blog on this, dare I say, exotic group for some time, but it just never really worked out. When it was nebulously suggested that some marine cryptids were "transitional animal(s) with reptilian and mammalian characteristics" (ahem...), this got me wondering if any of these early mammal relatives took to the water. While mammals have evolved numerous semi and fully aquatic forms, earlier synapsids did not evolve fully marine forms. This certainly makes the notion of a living marine one pretty dang bizarre. So, how aquatic did stem-group synapsids manage to become?

Germain and Laurin 2005 studied the microstructure of extinct and extant amniotes at the mid-diaphyseal level in order to determine lifestyle (terrestrial, amphibious or aquatic). One taxa studied was Ophiacodon, a pelycosaur of the family Ophiacodontidae (which includes some of the earliest known amniotes). Their model predicted an aquatic lifestyle for this species, which others predicted from morphology and the fact that it was found with fish and amphibians or even marine deposits. However, the authors note that the limbs of this species show no adaptations to an aquatic lifestyle and due to the lack of animals at its size, clustering in the study could be considered ambiguous. This paper appears to be a warmup of sorts, the authors intend to determine the lifestyle of early amniotes (they obviously plump for an amphibious one) but only used three fossil species to do so! As early an amniote as Ophiacodon is, it is still probably far too derived to be of any use. Perhaps studying fossils like Casineria would be of more use. Hopefully with future studies the lifestyle of Ophiacodon would be made more clear, oh yeah, and determine how early amniotes lived. 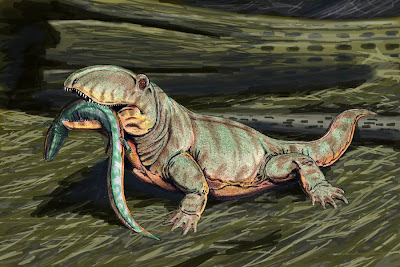 Ophiacodon, from here (no copyright). Since this is a rather common species, we can assume this reconstruction is fairly accurate. Superficially it doesn't seem to have any features of an aquatic creature. The snout is noted as being long and narrow with a lot of teeth, and would be characteristic of a piscivore if it wasn't so high. It could be possible for bone density and microstructure to be artifacts of some other lifestyle. Still, if it was found in those deposits, I guess it could have hung around the water a little...


One of the most fascinating taxa suggested to be somewhat aquatic is Lystrosaurus, a herbivorous dicynodont genus which straddled the Permian and Triassic. This means that the genus survived an event which killed off 70% of terrestrial vertebrate families, although a few species did not locally survive (Botha & Smith 2007). A few (probably carnivorous) therocephalian genera also straddled the barrier but with nowhere near the abundance of Lystrosaurus (Botha & Smith 2007). It has been noted that the genus did not have elongated neural spines and an expanded chest with thick ribs compared to other genera; it was previously suggested that these features indicated enlarged lungs which helped them survive the extinction event (Botha & Smith 2007). Earlier workers suggested that Lystrosaurus had adaptations for burrowing and finds in scratch-digger burrows confirm this; presumably this could have aided their survival (Botha & Smith 2007). Germain and Laurin 2005 also studied this genera (the third was Pachypleurosaurus) and cautiously inferred that it was amphibious, and noted that fossorial activities have not been accounted for. However, they also suggested that a fossorial and amphibious lifestyle are not incompatible. The star-nosed mole (Condylura cristata) is less fossorial than other moles and an excellent swimmer (Petersen and Yates 1980), although given the vastly different sizes and niches I don't know how comparable the two are. Ray et al. 2005 also studied bone microstructure and noted cortical thickness (especially in the humerus) which could suggest either swimming or digging. However, there was some bone structure (medullary spongiosa) which is typical of semi to fully aquatic animals. Since Botha and Smith reference this paper and still suggest it was fossorial, I'd suggest the latter explanation is still the most plausible. While some features may suggest an aquatic nature, with everything taken into account it seems weakly supported. Perhaps like the thick-tailed opossum they spent some time in the water, but were in that apparent "semi-semi-aquatic" category.

By now it seems pretty hopeless that there's a synapsid out there clearly demonstrating the traits of a semi-aquatic animal. Enter: the primitive cynodont Procynosuchus. It was a primitive member of the group (which gave rise to modern mammals) and lived in the upper Permian, and presumably went extinct in the P-Tr event. Kemp 1980 notes that Procynosuchus shows a suit of characters not found in any modern animals, and several unique to other therapsids as well. The zygapophyses (articular process) on the vertebrae are normally oriented (vertical) until the lumbar region where there is a sudden switch to a near-horizontal orientation. It appears that this allows for a great deal of lateral movement which was otherwise restricted in the other vertebrae. The tail had well-developed haemal arches and was also apparently flexible. Since this would not appear to help terrestrial locomotion at all, these features point to lateral anguilliform movement comparable to crocodilians and monitor lizards. Flattening of leg bones and well developed muscles suggest that it may have been used in locomotion. Oddly, the hindlimbs were capable of an erect gait when the forelimbs could only attain a sprawling gait. It is possible that it could attain two different gaits, also like a crocodilian.

Unfortunately, according to an article referenced at Palaeos (Hopson 1991) one author thought that all the traits thought to be related to a semi-aquatic lifestyle were artifacts of preservation. It's very hard discussing something that I don't have access to, were there other skeletons not showing traits? The flattening of the hindlimb bones and ribs could possibly be due to preservation, but really, all those other traits? I haven't seen any more discussion of this, and it seems like Kemp's analysis still stands (or is at least better known).


To answer my initial question: maybe? Presumably all of the taxa mentioned here interacted with water on some basis, but how adapted the first two are just isn't clear. I think that a skeleton getting deformed in a way that makes functional sense as an aquatic species is a bit hard to buy, and Procynosuchus seems to be the most aquatically adapted stem-group synapsid. The absence of many aquatically adapted species like the diapsids (and mammals) is conspicuous, and there really doesn't seem to be any anatomical reason for a whole radiation of animals to be incapable of adapting in such a way. Perhaps a few otter-like taxa will be found in the future, but I'm doubting any turtle mimics or long-necked whatzits.

Thanks to Christopher Taylor for pointing this out. Castorocauda lutrasimilis was a mid-Jurassic species often incorrectly called a mammal. It was a docodontan mammaliaform, which places it outside of Mammalia and makes it a stem-group synapsid. Confusingly, the term "mammal-like reptile" does not appear to be used for mammaliaformes and my replacement term was a bit more inclusive than I realized. Oh, and as far as adaptation goes it is supported by both skeletal and soft evidence and I have not seen any voices of dissent.

Kemp, T. S. 1980. The Primitive Cynodont Procynosuchus: Structure, Function and Evolution of the Postcranial Skeleton. Philosophical Transactions of the Royal Society of London. Series B, Biological Sciences, Vol. 288, No. 1027, pp. 217-258.

I don't think that anyone doubts that Castorocauda was semi-aquatic. There's one aquatic stem-group synapsid for you.

Dangit, I forgot about those "Mammaliaformes"!

Something fairly bizarre looking deserves to have a cult following.

The pictures you have up look like the sort of thing people put in their pools for children to play on. Creepy, you don't know why they're there, but there's no denying the fact that it's there anyways.

No such thing as a "mammal-like reptile," unless a reptile began converging on mammals. Y'see, mammals are synapsids, so the more correct term may be "mammal-like synapsid." Saying reptile is basically the same as saying synapsid. The two terms are (as far as I know), equivalent to their respective Amniota branches.

Yep, I should have probably further commented that the idea of "Reptilia" is getting phased out by the non-paraphyletic Sauropsida, making the term "mammal-like reptile" even more heinous.

"Mammal-like synapsid" is an interesting idea, perhaps it can be used to describe cynodonts and Mammaliaformes. As for Pelycosaurs and Therapsids, I guess stem-synapsid is the best name we have for name. I'd really like a name that highlighted their distinctiveness and didn't compare them to other groups, but oh well.