A Giant Snapper At Last!

A common cliché in fringe anecdotes is that when eyewitnesses see something beyond belief, the camera has the lens cap on/no film/failed to work/been misplaced. Logically this should be taken as a strike against veracity... but I began to wonder otherwise when it happened to me.

Of course, I've documented a big snapping turtle before, but my subsequent failures were astounding. I saw the turtles on multiple occasions this year (alluded to here), sometimes up close (touching, in fact) and once in triplicate. On all of these occasions I didn't bring my camera because I was commuting via bike, or the turtles fled before I could get their photographs. After a couple dozen failures, I gave up. Impulsively I decided on 8 November 2011 to take a trip searching for any reptiles or amphibians still active in the abnormally warm weather (about 70° F, 21° C) and saw this (plus a frog): 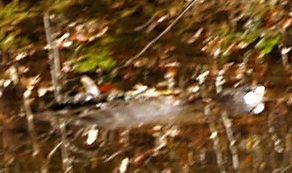 Blobturtle! I saw the turtle fairly clearly, but evidently my camera didn't. Rather than leave and be disappointed for a few months and then fail to see the turtles ever again, I realized I had no other option but to go in after it. Not only was the water very cold (it had snowed earlier in the year), it was murky and muddy and possibly had other snapping turtles I couldn't see. Gradually and with little subtlety, I made my way over to the turtle which had of course noticed me, but did not attempt to escape. 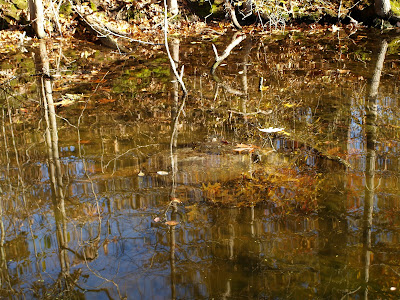 Remembering previous encounters and advice on pick-pocketing from Fagin, I approached the turtle from the rear, knowing it would eventually rotate around to defend itself. I also kept in mind how to fight the Cyberdemon from Doom - it's not just the shooting, it's the circle-strafing. With the cold water being slightly less of a hindrance for me, I managed to avoid something getting amputated. 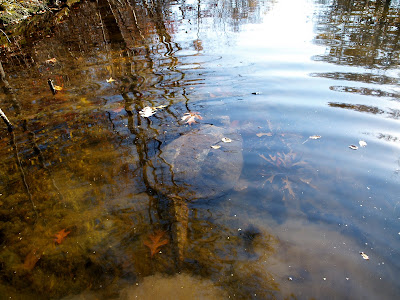 Getting closer, I confirmed my suspicions that, yes, this turtle is really really big. 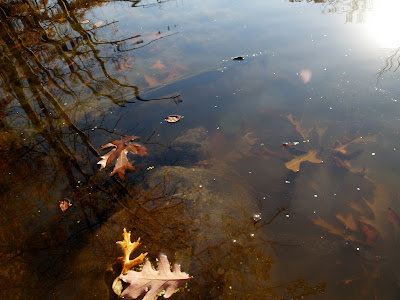 The closest thing I could get to a measurement. 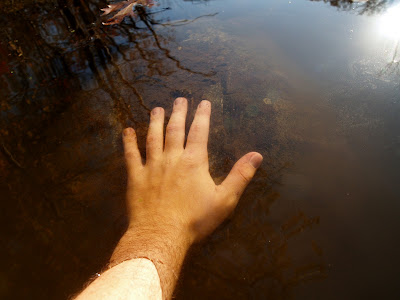 Eventually the turtle kicked up large amounts of silt and released gas (from... somewhere) and became impossible to see. I "ran" off, knowing that my luck in succeeding with this ill-conceived shenanigan was running out.

I know I'm never going to get an accurate length or weight measurement from this turtle... not without one or both of us getting hurt. Even if this specimen was a record (and there's no guarantee), it would not be worth risking the life of an old reptile to revise the SCLmax of 49.4 cm for Chelydra serpentina. From now on I'm leaving these turtles alone, my curiosity is satiated, and bothering them further will have no benefits. I'll have to live with the wonder that despite inhabiting a polluted body of water and having human hunt them and compete for their resources, things like this still exist.
Posted by Cameron McCormick at Tuesday, November 08, 2011
Email ThisBlogThis!Share to TwitterShare to FacebookShare to Pinterest

How old do you reckon it is, to be this big?

Turtles of the United States and Canada cited a study in which snapping turtles from a polluted Massachusetts marsh grew an average of 2.65 cm in strait carapace length in their 6th year and that a couple individuals averaged 4.85 cm in their 5th year. The body of water I found my turtle in also had high levels of phosphorus, which makes me wonder if it had similar conditions which were conducive to rapid growth. Even under remarkable conditions, the turtle's linear growth would probably slow substantially (it seemed large adults in the studies cited grew 1 cm SCL a year or less) so this turtle is undoubtedly still quite old. I'm not sure how old, but multiple decades seems likely.

Great info. Thanks for sharing your close encounter with the venerable old dude!

hey cameron where did you find this guy because i love to take pictures of turtles so this would be amazing to see :)

Eggs with the writers Robin Amos Kahn and Gary Richards and director Matthew Penn to discuss the upcoming production,facelift atlanta

Hello everyone. I was heartbroken because i had very small penis, not nice to satisfy a woman, i had so many relationship called off because of my situation, i have used so many product which i found online but none could offer me the help i searched for. i saw some few comments about this specialist called Dr James and decided to email him on enlargementherbs@yahoo.com so I decided to give his herbal product a try. i emailed him and he got back to me, he gave me some comforting words with his herbal pills for Penis t, Enlargement Within 1 week of it, i began to feel the enlargement of my penis, ” and now it just 2 weeks of using his products my penis is about 9 inches longer and am so happy..feel free to contact DR James on(enlargementherbs@yahoo.com)or whatsapp him on this number +2349055637784

I want to share a testimony of how Dr.Osemuhau herbal mixture cream saves me from shame and disgrace, my penis was a big problem to me as the size was really so embarrassing,and i was also having weak erection problem. I can't make love to my wife and my penis was just too small a full grown man like me having 4 inches penis and to worsen it i don't last in sex i cant even last two minutes it was really a thing of shame to me. My wife was really tired of me because my sex life was very poor,she never enjoyed sex,i was always thinking and searching for solutions everywhere until when i saw a testimony of how Dr.Osemuhau herbal mixture cream have been helping people regarding their sex life, so i decided to give him a try and to my greatest surprise in less than one week of taking the herbs my penis grow to 8 inches i couldn't believe my eyes and as i speak now my penis is now 8 inches and i do not have week erection again. I can make love to my wife longer in bed. And my marriage is now stable,my wife now enjoy me very well in bed. can contact him drosemuhau@gmail.com {) or call or what-apps him through +2348168714427

Thanks for your sharing, it helps me a lot and I think I'll watch your post more.
…………………….
slotxo
สล็อตxo
ทางเข้า slotxo

few week ago I felt some pains and I went to the hospital my doc told me I had hpv about 1 yr and I need to start the treatment early, he gave me some medicine to be taking and I told him no I’ll not, because I hated taking medicine when I won’t not see cure for the purpose. After I got home I started getting worried searching for strong advice and I found valid natural treatment online lot people says they got hpv cure from Dr onokun and I email Dr Onokun 3 days passed, I purchase his cure online some weeks after the process taking his treatment i got cured. I went for checkup twice after taking the natural treatment from the herbalist called Dr onokun and i tested negative. contact him on email: Dronokunherbalcure@gmail.com or his facebook page https://www.facebook.com/naturaltreatmentcenter1 or website via www.Dronokunherbalcure.wordpress.com

Excellent post! We will be linking to this great content on our skull rings web site. Keep up the good writing. 한국야동

Please visit once. I leave my blog address below
야설
일본야동

Good way of explaining, and pleasant post to obtain information about my presentation focus, which i am going to present in college 한국야동

Please visit once. I leave my blog address below
야설
한국야동

I have to thank you for the efforts you’ve put in penning this blog. I’m hoping to check out the same high-grade blog posts by you later on as well. In truth, your creative writing abilities has encouraged me to get my own blog now 야동

Please visit once. I leave my blog address below
국산야동
일본야동

Your style is so unique in comparison to other folks I have read stuff from. Many thanks for posting when you’ve got the opportunity, Guess I’ll just book mark this site. 국산야동

Please visit once. I leave my blog address below
한국야동
국산야동

Great web site you have here.. It’s difficult to find high quality writing like yours nowadays. I honestly appreciate people like you! Take care!! 한국야동

Please visit once. I leave my blog address below
야동
일본야동

What a post I've been looking for! I'm very happy to finally read this post. 토토사이트 Thank you very much. Can I refer to your post on my website? Your post touched me a lot and helped me a lot. If you have any questions, please visit my site and read what kind of posts I am posting. I am sure it will be interesting.

The experts of BookMyEsay are offering best Dissertation Literature Review Writing Help . they have capable and experienced Ph.D. journalists who are sharing their insight and involvement with this field.