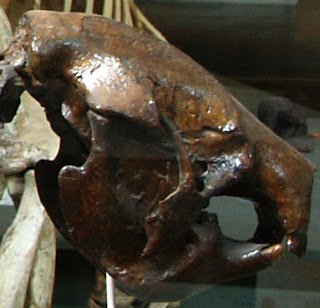 The unusual skull from the last article does not belong to some huge rodent, glyptodont, diprotodontid, or Thylacoleo - it is from the extinct Cuban sloth Megalocnus rodens. This particular specimen was part of a panoply of sloths at the American Museum of Natural History:
Megalocnus is probably a member of the clade Megalonychidae, which can be distinguished (in part) by canine- or incisor-like first upper and lower teeth (Gaudin 2004). It may come as a surprise that megalonychids are still with us, as Choloepus (Two-Toed Sloths) are living representatives, and grouped closely (albeit not strongly) with Megalocnus and other Antillean sloths in at least one phylogeny (Gaudin 2004). Yes, this means that Two- and Three-Toed Sloths are distant relatives, with the former being far more closely related to large-bodied 'ground sloths'. I'd recommend this article from the old Tet Zoo for a sloth primer - they're far more diverse and interesting than they're often given credit for, although I suppose that's true of just about any group.

The most striking aspect of Megalocnus rodens is the vaguely rodent-like skull, and it was in fact initially described as a giant rodent from an incomplete mandible (de Paula Couto 1967). While the chisel-like first teeth look particularly rodent-y, the overall dentition is similar to Megalonyx (de Paula Couto 1967). Compared with the other sloths on display, M. rodens displays an elongated neck, heavy body, short tail, and plantigrade hands and feet (de Paula Couto 1967). M. rodens may have been the second-smallest 'ground sloth' on display at the AMNH (Hapalops is slightly out of view), however it was still a large animal which may have weighed about 150 kg (330 lbs) in life (van der Geer et al. 2010). Not bad for a terrestrial Cuban mammal


Megalocnus rodens is most notable for when it went extinct - the latest fossil dates from 4200 years before present (MacPhee et al. 2007). These sloths were still trundling about when the Great Pyramid of Giza was hundreds of years old. All mainland sloths, except of course Bradypus and Choloepus, were extinct by about 10,000 years ago; in contrast, the Antilles had 13 species of sloths in the late Quaternary (Steadman et al. 2005). Most remarkable of all, M. rodens appears to have co-existed with humans on Cuba for over a millennium (MacPhee et al. 2007). There does not appear to be any clear evidence for how the sloths went extinct, although a 'long-fuse' model of human predation would appear to be the most likely. If only they held on for a few more millennia.