An Interlude Of Poorly-Reconstructed Bears

There's too much on my plate right now to allow for a proper followup on the Bad-Ass Mega-Bear Arctotherium angustidens - now one of my most visited posts, wow! - so I figured to do some recycling in the interim. I have a lot of unfinished posts, one of which on deceptive soft tissue so happens to have a section on bears. So, I excised the opening paragraphs and expanded on the bear section a bit to serve as an introduction to the topic in general and tie in with a cryptic statement in the prior post. Don't worry, it gets to bears soon.

For all of the awesome, mind-blowing fossil reconstructions out there, some are incredibly lazy. Particularly noxious offenders include mimeographing inaccurate morphology from prior works (e.g. pronated theropod hands, elephantine sauropod hands), portraying extinct animals as identical to distant modern relatives (e.g. Teratorns-as-Condors, Kayentachelys-as-Snapping-Turtle, Prosalirus-as-Bullfrog...), and of course portraying live animals as shrink-wrapped skeletons:


SV-POW!'s kickass articles on sauropod life reconstructions (Part 1, Part 2) served as a major catalyst for my interest in this topic, particularly the second part which explains how portraying 'pods with freakish shrink-wrapped skull-heads has become common, if not expected in palaeo-art. I'd like to suggest that Shrink Wrapped Dinosaur Syndrome (SWDS) is but a facet of a larger phenomenon in which an animal's appearance as determined by skeletal structure, soft tissue, and external cover (hair, feathers) is improperly depicted and/or misunderstood*. Just look at that poor Dimetrodon up top (from Cleland 1916), yeesh. This phenomenon is not limited to fossils, as it can afflict carcasses still in the process of rotting or even live animals.
*Snazzy acronym pending
Since I'm not exactly a skilled re-constructionator, I figured I could put my not-skills to use and concentrate on reconstructing animals incompetently, in the hope of deconstructing some reconstruction myths. Or something.
...
Let's say a clever yet ignorant individual finds a decomposed corpse out in the woods, perhaps reduced to a skeleton with a few globs of flesh and hair still attached. It doesn't remind them of any animals they've ever seem, so they take a stab at reconstructing the presumed cryptid: 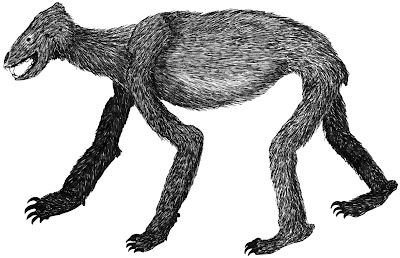 The person posts the reconstruction online, along with some blurry photographs of the remains taken at surreal angles typical of German Expressionism. Commenters suggest seemingly random and inexplicably specific taxa for the animal's identity, including the weird mustelid Ekorus, Bigfoot, the weird peccary Mylohyus, non-mammalian synapsid Titanophoneus, and a werewolf. Eventually, a near-consensus is reached suggesting that the carcass is of a late-surviving juvenile "short"-face bear Arctodus. Of course, the animal in question is actually this:
The contrast between the popular conception of bears being stumpy-legged fatties and their skeletons is truly remarkable. My "reconstruction" is cribbed from a skeleton figured in The Royal Natural History: Mammals (page 2) which unfortunately does not have a label, but appears to be an American Black Bear (Ursus americanus) as opposed to some fictional generalized bear. If the "reconstruction" looks familiar, that's because a mangy U. americanus was once confused for Bigfoot, and no, the legs of the creature are most certainly not "too long" to be from a bear. And since when is Bigfoot a quadruped?
Arctodus is typically portrayed as a bear on stilts, in sharp contrast to other species, but is truly not that different. It is almost always shown with rather short hair, which does occur in the Sun Bear, but is highly unlikely to occur out of the tropics; see serchio25's Deviant Art for an intriguing portrayal of Arctodus with more probable hair. It also doesn't help that when Arctodus is compared with other bears or people, it is shown at maximum size. It is now known that Arctodus simus has legs that are not elongated in comparison with other bears, and that the appearance of long legs is probably an optical illusion caused by a rather short back (Figueirido et al. 2010). Arctodus does seem to be rather gracile in build, at least in comparison with Arctotherium angustidens. Grrrraaaahhhh of Shaggy God (citing Nelson and Madsen 1983) informed me of the A. simus specimen UVP 015 with a femur 72.3 (28.5") in length, 6.4 cm (2.5") in mid-shaft width and (as estimated by Figueirido et al. 2010) a weight of 957 kg (2110 lbs); the largest Arctotherium angustidens (see the prior post) has a humerus length* of 62 cm (24.5"), a mid-shaft width of 9 cm (3.5"), and an amazing weight of 1588-1749 kg (3500-3855 lbs). It seems strange that two closely related and similarly sized bears would differ so much in build, especially when bears in general seem conservative in their body plan variation, as demonstrated below.
* Bear humeri seem to be slightly shorter than femurs. UVP 015 is still certainly the tallest bear ever.
And now, bears, bears, bears!
So yeah, Arctodus simus is certainly not long-legged or feline-like. Did the originators of the claim even bother to compare it with other bears?
References:
Cleland, H. F. (1916). Geology Part II. Historical. American Book Company: New York, Cincinnati, Chicago. Available.
Figueirido, B. Perez-Claros, J. A., Torregrosa, V., Martin-Serra, A., Palmqvist, P. (2010). Demythologizing Arctodus simus, the 'short-faced' long-legged and predaceous bear that never was. Journal of Vertebrate Paleontology 30(1), 262 - 275. Available.
Lydekker, R. (1894). The Royal Natural History: Mammals. Frederick Wayne and Co: London. Available.
Nelson, M. E. and Madsen, J. H. (1983). A Giant Short-Faced Bear (Arctodus simus) from the Pleistocene of Northern Utah. Transactions of the Kansas Academy of Science 86(1), 1-9.
Posted by Cameron McCormick at Friday, February 04, 2011
Email ThisBlogThis!Share to TwitterShare to FacebookShare to Pinterest

I love to point out to people the skelaton of the sperm whale, and the corresponding actual animal. If we didn't know the present animal, I have to wonder how scientists might have reconstructed the beast for museums and such.

Oh, and when you list "inexplicable taxa" I am suprised you left off the best of all, Megotherium.

It's surprising you mention sperm whales, as I was planning on "reconstructing" one. It's going to be really weird, although if I can figure out how to do a rorqual, that might give it a run for its money.


Megotherium
Crap! I'm off my game! I should add that I spent a lot of my youth on cryptozoology forums, and these suggestions are fairly run of the mill.

In my opinion the Bergman's bear was an Asian arctodus. Kamtchatka's fauna is almost the same than Alaska's, moreover the American wood bison used to live in Siberia possibly until 2000 years ago.