Holy crap does time fly by. I can't believe I managed to slip into my old posting frequency without noticing. To try and bump up activity, I'll start documenting some of my more ill-conceived - and hopefully interesting - adventures.

On the Isle of Aquidneck and in the village of Melville, there stands a forgettable 600 foot (180 m) stretch of trees along Rhode Island Route 114. This woody tract unceremoniously sandwiched between Raytheon and apartment complexes looks like any of the others intermittently present alongside the road. It is then shocking to learn the seemingly insignificant parcel reportedly contains old-growth forest. Resultantly, this has become a favorite haunt of mine.

As I appear legally incapable of pasting a map onto this blog, the best I can do is link to a Google map. The marker is questionably placed as it is south of the valley proper and some 400 feet (120 meters) southwest of the entrance. But hey, at least thanks to the Google Truck you can see how just how uninteresting Lawton's Valley* appears from the road!

I feel obliged to point out that Lawton's Valley is presently owned by Raytheon, although only the woodlands surrounding it are off-limits. There appears to be a drive to increase the legal protection of the area, but I have no idea what the current status is.

* Sources tend to vary between Lawton and Lawton's. The latter appears to have more frequent usage, so I'll go with it.


Southeast of Lawton's Valley and Rt. 114 is the Lawton Valley Reservoir, a ~85 acre (35 hectare) construct sitting around 108 feet (33 meters) above sea level, according to Daft Logic's Google Maps Find Altitude program. Thanks to the magic of the internet, I found a video which explains that the disturbance in the water is from aeration discs. Now I can sleep at night. There appears to be automatic control of the water level, as considerable amounts of water flow into Lawton Brook periodically, scaring the hell out of me in the process.

The north/northwestern border of the reservoir is a huge levee about half a mile long (0.8 km) and 30-40 feet (9-12 m) high at the peak. The office buildings in the extreme background are part of the Raytheon complex, northeast of Lawton's Valley. The culvert in the bottom photo is the mouth of Lawton's Brook, which can be followed to enter the valley. It is also possible to enter through the apartment complex, but the parking is lousy and steep slopes + slippery leaves can spell trouble.
The woods between the service road and 114 are nothing special - as flat, swampy, and full of garbage as the majority of Rhode Island - until you hit this: 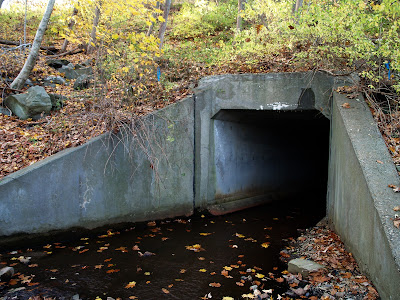 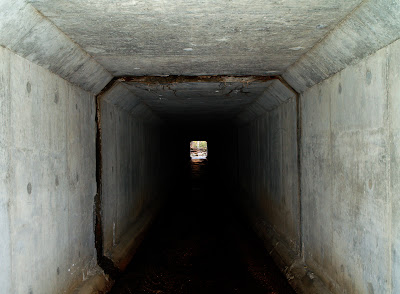 The water in the tunnel is normally shallow enough that shoes won't get wet... except during high flow when the depth reaches around 2 inches (5 cm). Thanks to canalization, the velocity (and noise) during high flow seems remarkable, but thankfully not dangerously so. Despite my newfound fear of tunnels under highways, it was all worth it to see this: 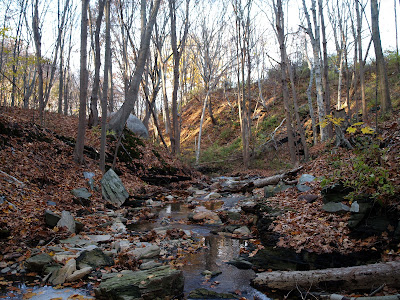 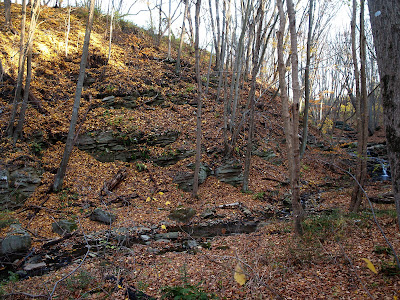 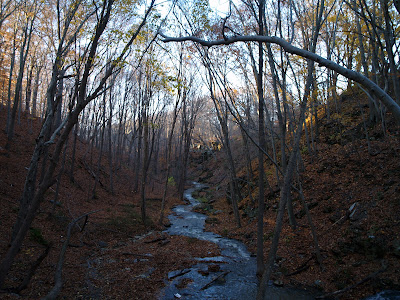 Lawton's Valley seems to occupy space in an improbable way. Even with a highway to my back, defense contractors to the right, and apartment dwellers to the left, it felt like a place apart. Perhaps it has to do with me spending a considerable amount of my life in the Midwest and thus being bewildered by even the slightest changes in elevation. Anyways, Lawton's Valley is surprisingly large considering the small profile from the highway: it runs about 3000 feet (0.57 miles, 0.9 kilometers) from the tunnel exit to Narragansett Bay and the non-fenced in portion is at least 20 acres (8 hectares). The bottom of the valley is about 110 feet (33 m) above sea level near the start, levels out to around 15 feet (4.6 m) halfway through, and then slopes down to sea level. The maximum depth of the valley seems to be at least 40 feet (12 m). Some portions of the valley have vertical rocky faces, which backs up the occasional description of 'canyon', at least in part. 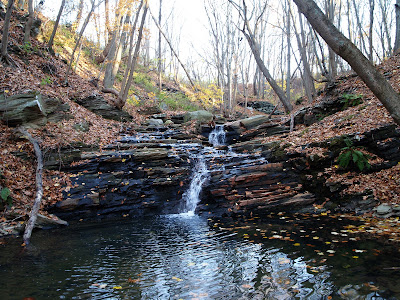 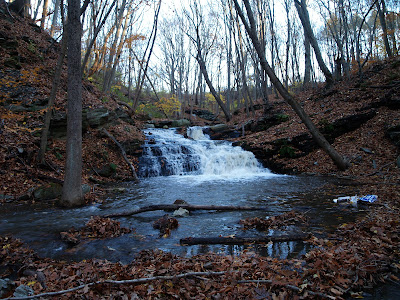 A visual representation of the difference in flow rates. The latter of these seems to be around, or even slightly surpassing, the pre-reservoir norm - see here and here. As evidenced by the pictures, Lawton's Valley was built upon at some points, in spite of its physical layout, presumably because the (then) Wading River was attractive to mills. Richard Chaplin's article on the Valley's history mentions that a house was built on the site of an old mill by none other than Julia Ward Howe, author of The Battle Hymn of the Republic. Richard L. Chaplin's overview article notes both a grist mill and flax mill were present up until 1910, when they were washed away, which (to me) suggests the house was re-converted into a mill at some point. 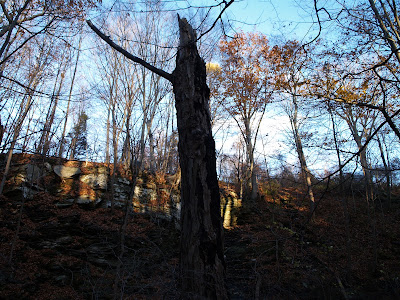 So is former mill site Lawton's Valley really an old growth forest? An article by James Johnson states that arborist Matthew Largess found a number of rare trees including American Beech (Fagus grandifolia), a large  Hornbeam (Carpinus), one White Ash (Fraxinus americana) which was both very large and unusually located in a stream bed, a Yellow Birch (Betula alleghaniensis) among the largest in New England, and a Sugar Maple (Acer saccharum) which may be the largest in New England, with a circumference of over 13 feet (4 m) and estimated age at least 300 and possibly 500 years old. The valley indeed appears to have many of the characteristics of old growth, but as yet this status appears unconfirmed.

Lawton's Valley was not included in a survey of an old growth forests in Rhode Island, almost all of which are found in the relatively sparsely populated Washington County, but interestingly the nearby Oakland Farms was. Despite being a 20 acre (8 hectare) area located near a subdivision and the sea, it is a functional old forest (not just old trees) which was either last disturbed early on by European settlers, or not at all. According to Matthew Largess, who had worked on preventing Oakland Farms from being developed, the two forests (about 1.3 miles/2.1 km apart) were at one point connected. I guess that gives them a sort of Fangorn-Old Forest connection.

Even if Lawton's Valley is not a true old growth forest, it is an amazing collection of specimens and history for a tiny obscure corner of a tiny obscure state. The latest publication by the Raytheon Employees Wildlife Habitat Committee indicates it is in good hands and may finally get the status and recognition it deserves.
Posted by Cameron McCormick at Saturday, November 20, 2010
Email ThisBlogThis!Share to TwitterShare to FacebookShare to Pinterest

You need a magical dog to go with your during Adventure Time, and possibly some swords.

There are different types of skins that the computer user must know about before they decide on which skin type they want to settle for.cure panic attacks

Wow. Hunted for lawtons valley stuff before and just saw the sign for it today. Then found this. Looking because julia ward howe's daughter Maude wrote about it in her book , "This was my Newport" cool.

I know your expertise on this. I must say we should have an online discussion on this. Writing only comments will close the discussion straight away! And will restrict the benefits from this information.West Chester Mosquito Control

Great post! We adore this blog and This information is very good.