Cephalocarids, literally 'head shrimp', are superficially reminiscent of those other oddball arthropods I covered, the remipedes. Both are 'class'-level crustacean clades discovered in the latter half of the 20th Century and assumed to be 'extremely primitive' on the basis of traits such as elongation, undifferentiated trunk appendages, and weak tagmosis (formation of head/thorax/abdomen by fusing 'segments') (Ruppert et al. 2004). Some have pointed out that arthropods should probably be described as 'jointed' rather than 'segmented' (Valentine 2004), suggesting the similarity of these 'primitive' clades to annelids is coincidental. A (Cephalocarida + Remipedia) clade has been recovered on occasion, and recently a molecular phylogenetic analysis proposed the taxa to be called 'Xenocarida', or 'strange shrimp' (Reiger et al. 2010). Before I delve into the hyper-controversial world of (pan)crustacean systematics, more background is needed on the cephalocarids.

Dorsal view of Hutchinsoniella macracantha taken and modified from Sanders (1955). The proportionally large head (17-18% length - excluding caudal spines) provides the 'class' name; it should be noted that copepods have similar, if not more extreme, proportions. The purported common name 'horseshoe shrimp' derives from the head shape, but I'm not enthusiastic about the descriptive value of that name either.
Cephalocarids appear not to exceed 4 mm in length (Ruppert et al. 2004), so it is not particularly surprising that they were overlooked for so long. The first recorded specimen was found in September 1953 in San Francisco Bay, although that species (Lightiella serendipita) was not properly described until Jones (1961). In August 1953 another specimen was found in Long Island Sound, but the actual holotype for Hutchinsoniella macracantha was recovered in July of the next year from the roughly the same locale (Sanders 1955). Confusing! Anyways, Hutchinsoniella specimens from Long Island Sound and Buzzard's Bay were found on muddy bottoms 9-29 m below the surface, although shortly afterwards they were found down to 100 m on a continental slope (Hessler and Sanders 1964). The Lightiella specimens from San Francisco were only found 3 to 5 feet (~0.9 to 1.5 m) below the lowest water level (Hessler and Sanders 1964). The depth record for cephalocarids as a whole is 1550 m, and they have been recorded from sand in addition to mud (Ruppert et al. 2004).

Major cephalocarid discoveries are still being made, and I would certainly look closely at any sand or mud I happen to dredge up. A new species was recently discovered from Japan (Shimomura and Akiyama 2008) and the clade (in the form of a new species) was just described from Europe (Carcupino et al. 2006). Martin et al. (2002) state the presence of cephalocarids anywhere is notable due to their infrequence and considerable interest in their morphology and phylogenetics - so why is that?

Lightiella incisa taken and modified from Martin et al. (2002). The roundish structures are oocytes - all species are hermaphrodites.

Sanders (1955) noted that cephalocarids share traits with a number of clades such as branchiopods (number of thoracic and abdominal segments), malacostracans (postcephalic appendage morphology), and copepods (large head) - but concluded that they were at least as 'primitive' as branchiopods and probably related to the 'ancestral stock' that gave rise to those clades. Cephalocarids were assumed to be eyeless, but Burnett (1981) recorded the degenerated compound structures in H. macracantha - and used that as further evidence that cephalocarids were almost unchanged from a 'Paleozoic urcrustaceanlike organism'. I'm not particularly impressed with that line of reasoning. Read et al. (1994) found that cephalocarid muscle overall resembles that of other crustaceans, but (along with ostracods) lacks myofibrils in a condition similar to onychophorans, and was assumed to represent a 'primitive' rather than simplified condition. Considering the incredibly small size of cephalocarids (most appear to be between 2-3 mm) the possibility of simplification cannot be casually tossed aside. Elofsson and Hessler (1990) examined the central nervous system of H. macracantha and were surprised to find it highly developed (albeit missing some structures - like eyes, for the most part) and thought that since it didn't conform with the 'overall primitiveness' of the animal, it must have evolved separately from that of other crustaceans! L. incisa appears to prefer oxygen-rich microzones (Martin et al. 2002) - which would seem appropriate for animals with a complex nervous system. It seems that a lot of these systematic inferences were made with the 'primitiveness' of cephalocarids in mind and fitting the evidence into that preconception - so what happens when phylogeny is examined using modern methods? 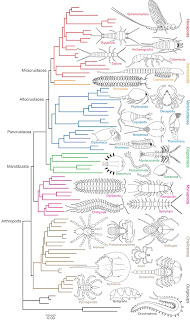 From Reiger et al. (2010). Note the position of Xenocarida - the sister group of insects!
Reiger et al. (2005) used RNA sequences to hypothesize insects were terrestrial (pan)crustaceans and that branchiopods were their sister group, with a cephalocarid + remipede clade as the sister group to (Branchiopoda + Hexapoda). The authors speculated that members of this clade had a proclivity for near shore or marginal marine habitats, but were excluded by other pancrustaceans and forced into their present unusual habitats (hexapods live on land and freshwater, branchiopods generally in freshwater, and remipedes live in anchialine caves) (Reiger et al. 2005). A prior study using different genes also recovered a cephalocarid + remipede clade and interpreted it to be due to long-branch attraction, but Reiger et al. (2005) argue that it could be interpreted literally. While Reiger et al. (2005) argue that cephalocarids are derived, they could not answer whether or not their morphology is actually plesiomorphic - but noted that prior placements based on the 'ur-crustacean' hypothesis were somewhat anachronistic. It should be noted that a phylogeny determined from mitochondrial protein coding genes failed to recover 'Xenocarida', but did create a clade of branchiopods, malacostracans, cephalocarids, and insects (Carapelli et al. 2007).

I think what we should take away from the phylogenetic work is that the cephalocarid-as-ur-crustacean hypothesis is looking rather shaky and an extensive examination of morphology and molecular data is needed to resolve the phylogeny with anything resembling rigorous support. Cephalocarids are not known from the fossil record, so when or if those discoveries are made, hopefully it will clarify if the morphology is plesiomorphic, simplified, or some combination of the two. The potentially phylogenetically significant placement of cephalocarids probably means our knowledge of them will expanding in the near future and they won't always be so enigmatic. I certainly intend to squint at marine mud the next time I happen across it...


Sanders, H. (1955). The Cephalocarida, a new Subclass of Crustacea from Long Island Sound. Proceedings of the National Academy of Sciences 41(1), 61-66. Available.

Valentine, J. (2004). On the Origins of Phyla. Chicago, USA: University of Chicago Press.
Posted by Cameron McCormick at Monday, February 22, 2010
Email ThisBlogThis!Share to TwitterShare to FacebookShare to Pinterest

Hey! This is my first visit to your blog! We are a group of volunteers and starting a new initiative in a community in the same niche. Your blog provided us valuable information to work on. You have done a marvellous job!