The first post of this series looked at fossil cephalopods whose inclusion in the order Octopoda (= Octobrachia) is a matter of debate. Pohlsepia mazonensis is an early Carboniferous coleoid with 10 appendages (including 2 tentacles!) which was interpreted as an octopod because of its sac-like body and lack of an apparent shell; the presence of fins indicates that it must have had some internal support and it is currently ignored in phylogenetic analyses because of its dubious preservation. Proteroctopus ribeti was a mid-Jurassic coleoid with 8 limbs, but it also curiously lacked a gladius despite having fins; it could be a stem-octopod, but affiliations with vampyromorphs are just as probable with the available evidence. Trachyteuthids are a mid-Jurassic to late Cretaceous family currently thought to be vampyromorphs (previously squids) but their beak and gladius morphology implies that the squid-like coleoids with eight cirrated appendages and four fins are in fact stem-octopods. Hopefully healthy debate in the future will solidify the phylogenetic positions of these organisms, but there are fossils with undoubted affinities to Octopoda.

P. newboldi was the only known species of Palaeoctopus for well over a hundred years, but recently Fuchs et al. (2008) described another species, P. pelagicus, from the early Turonian (~93 mya) of Mexico which differs from P. newboldi in the form and structure of the reinforcements and fields of their gladius remnants. The soft body morphology of P. newboldi indicates that it was probably capable of some benthic locomotion; this data is lacking for the earlier P. pelagicus, but the low oxygen of the sea floor and the distance from coasts strongly suggests that this species was entirely pelagic (hence the name) (Fuchs et al. 2008). I can't help but wonder if Palaeoctopus is paraphyletic or polyphyletic, considering the millions of years between the species and the possible lifestyle differences. 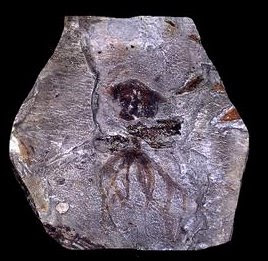 Palaeoctopus newboldi holotype. The soft body morphology of P. pelagicus is unknown, but likely to show more evidence of a pelagic lifestyle.

Palaeoctopus pelagicus was briefly the oldest unambiguous incirrate octopod until Fuchs et al. (2009) described five specimens from two genera and three species from the slightly older Upper Cenomanian (~95 mya). Keuppia was placed in the same family as Palaeoctopus, Palaeoctopodidae, on the basis of sharing blade-like medially isolated bipartite gladius vestiges (Fuchs et al. 2009). Unlike Palaeoctopus, the Keuppia species have a gladius vestige complex with a sub-triangular/semi-circular shape and linear growth patterns instead of concentric (Fuchs et al. 2009). The shape of their gladii remnants are more reminiscent of loligosepiid Octopodiformes, leading the authors to greatly revise their "teudopseid pathway" phylogeny proposed in earlier articles (Fuchs et al. 2009). Curiously, none of the three Keuppia specimens showed preserved fins (they did show suckers, ink sacs, gill lamellae, etc) - however circular encrustations imply that they had basal fin cartilage and were powerful swimmers (Fuchs et al. 2009). Palaeoctopus did not have preserved basal fin cartilage but it did have fins, Fuchs et al. (2009) suggest that it was a less powerful swimmer than Keuppia. I'd like to suggest the possibility that Keuppia recently lost its fins and still possessed a swimmer-like gladius - but I'm not the palaeontologist here. When more fossils turn up, it seems likely that they'll possess some bewildering array of characteristics that leads to more phylogenetic upheaval. The concept of morphological plasticity in early evolutionary "stages" is beginning to sound more plausible to me...

Another undoubted incirrate octopod from the Upper Cenomanian of Lebanon, incredibly this species already possesses stylets and appears to be a member of the extant family Octopodidae (Fuchs et al. 2009). Stylets (or rods) are gladius vestiges even more reduced and separated than those of the Palaeoctopodidae*; Fuchs et al. (2009) state that the stylets of Styletoctopus resemble those of Enteroctopus, Benthoctopus and Eledone in the possession of anterior and posterior "shoulders"**. Despite its otherwise modern morphology, Styletoctopus has circular structures which may be interpreted as small globular fins - rather unexpected for a cephalopod with such a reduced gladius (Fuchs et al. 2009). If fins were present (and that's a big "if"), it would seem to indicate that fins were lost multiple times within the incirrate octopods. Styletoctopus implies that Octopoda first derived at least in the Early Cretaceous and possibly the Jurassic (Fuchs et al. 2009).
* Interestingly, Keuppia has posterior shell sacs (remnants) while Palaeoctopus had more laterally placed ones transitional in placement between Keuppia and Styletoctopus; Fuchs et al. (2009) suggest there is some sort of functional difference associated with these placements.

** Strugnell et al. (2005) found Benthoctopus and Enteroctopus to form a clade despite being classified in different subfamilies. Strugnell and Nishiguchi (2007) noted that some previous authors considered Eledone basal - unfortunately Benthoctopus and Enteroctopus were not included in the analysis but Eledone tended to group with other octopods with one row of suckers.

Fuchs et al. (2009) mentions a publication which described an unpaired saddle-shaped shell vestige possibly belonging to a cirrate Octopod. I cannot find this:

Tanabe et al. (2008) describe a medium-sized lower jaw from the Santonian which shows the characteristic posteriorly expanded wings and ventrally projected inner lamella with a narrowly rounded crest typical of Octopoda - however it was not well preserved enough to determine any further relations.

Two species, P. pacifica and P. haggarti, have lower jaws with a similar shape to modern cirrates, albeit with a posteriorly expanded lateral wall and greater size (Tanabe et al. 2008). P. haggarti has been found in the Santonian and Lower Campanian of Vancouver Island while P. pacifica is known from the Lower Campanian of Hokkaido and Vancouver Island, they are similar in size and morphology although the P. pacifica specimens were not as well-preserved (Tanabe et al. 2008). Since the authors also found a similarly sized vampyromorph from the Lower Campanian of Vancouver, Nanaimoteuthis jeletzkyi, they used a negative allometric equation scaled up from modern Vampyroteuthis to estimate that all of these species ranged between 11-57 kg (24-126 lbs) in weight and 24-37 cm (9.5" - 14.5") in mantle length. A Cirroteuthis magna with a 33 cm mantle length (13") and total length of 1.7 m (5'7") has been reported - but unfortunately not weighed (Collins et al. 2001). Judging from the photo, it probably weighed less than 10 kg - but then again, I'm not a teuthologist.

That's about it for interesting fossil octopods, no offense to the Argonauts. Considering how much this topic can change in a couple years I might as well start preparing for the re-reboot... if I didn't have a lot of other things to do.

Cameron--
Off topic, but you recently linked a Mauricio Anton drawing in a comment on Brian Switek's ("Laelaps") Moropus post. Do you have an opinion as to the size of the squares in the background?

I said:
The picture by Mauricio Anton that Cameron McCormick linked to (five responses up) is one of the many beautiful pictures in "Mammoths, Sabertooths, and Hominids: 65 million years of mammalian evolution in Europe" by Jordi Agusti and Mauricio Anton (Columbia University Press, 2002-- title pretty much describes content, though the European mammal story involves a lot of "immigrated from Asia at this time" in addition to a bit of "evolved in situ" ... fun book, roughly at the level of Kurten's "Age of Mammals" on the popular to technical spectrum, or maybe just a bit more wonkish than Kurten's book): this image is on page 144.

Like many of the "parade of suspects" illustrations in the book, the animals are shown passing a wall of squares: in some these are one-meter squares, in others 50-centimeter: alas, the caption of this one doesn't specify the dimension! ... I'd ***guess*** that they are 50 cm, which would make the big Schizotheriine (Ancylotherium) about the size of a large horse and the Chalicotherium in the foreground more the size of a large gorilla: if they are meter squares these would be seriously BIG animals, in the Elephas and Megatherium size range. But I'm not sure of this.