The ziphiid genera covered so far in this series have either had one or two species making it remarkable that Mesoplodon has at least 14 (the most for any cetacean genus). In an attempt to understand why there are so many mesoplodonts, I'll be looking at broad geographic locales (e.g. the North Atlantic) to try and determine any niche differences or exclusion that may be occurring. This species doesn't exactly fit in that framework since it inhabits tropical to warm temperate waters (and sometimes cold temperate) in the Atlantic, Indian and Pacific oceans with a range apparently second only to Ziphius in size (MacLeod et al. 2006). However, distribution maps from MacLeod et al. 2006 also show that there does not appear to be much overlap with M. stejnegeri in the North Pacific and M. layardii, M. hectori, M. grayi and M. bowdoini in the southern hemisphere so it could be possible for one or two to be occupying the same niche as M. densirostris.
So what niche exactly does M. densirostris occupy? We know that this species has a generalized ziphiid stomach whereas other North Atlantic mesoplodonts (M. mirus, M. europaeus, M. bidens) have derived ones (Mead 2007) but currently we can't predict what sort of implications this may have. MacLeod's thesis classifies M. densirostris as a small prey consumer (as all mesoplodonts appear to be) but notes that in the North Atlantic it prefers shallower waters (<700>1000 m). The dwarf sperm whale (Kogia simus) is another possible competitor that seems to prefer even shallower waters (MacLeod 2005). A matter for future investigation should be if M. densirostris has a preference for relatively shallower waters in other areas with greater mesoplodont diversity and if there is some sort of physiological preference.


I can't find a citation for this, but I'd venture to say that M. densirostris is the best known of the mesoplodonts. It is at least the only species for which there are readily available videos, and surprisingly clear ones at that:

Additional videos of M. densirostris swimming underwater can be found here. As you can see from the videos (and not some notoriously low-fi drawing by yours truly) males have some outrageously arching mandibles, apparently more so than any other mesoplodont.

In addition to having an extreme range and appearance amongst the mesoplodonts, the dense-beaked whale holds the record for the densest (MacLeod 2001) and most mineralized bone (Zylberberg 2004) described thus far. The rostrum of a dolphin (Delphinus delphis) has a density of 0.79 grams per cubic centimeter whereas the mesorostral ossification has a density of 2.6 - it should be noted that the (morphologically similar) M. carlhubbsi has a density of 2.4. There is a shockingly large number of papers on this ossification from a materials science perspective (more of my dad's thing) and I couldn't help but note the conclusion of Currey et al. 2001: "we have no idea of the adaptive reason, if any, for the production of such a brittle material".

This is of course where the ubiquitous Colin MacLeod comes in to explain the hyperossification in the larger context of the animal. The only ziphiids lacking extreme ossification are members of Hyperoodon, which as we know are specialized headbutters, and scars on male mesoplodonts indicate that there are jousts with the males facing each other and "flipped" (MacLeod 2001). Previous authors assumed that the rostrum would be subjected to direct ramming but did not take soft tissues and other apparent adaptations (e.g. buildup of bone around the tusks and anterior of the mandible) - MacLeod reasons that the rostrum will be mostly subjected to forces of compression and longitudinal grains will prevent any major (transverse) breaks. Adult females also have this ossification but as you can see they also develop an extreme "stepped" mouthline with no protruding tusks so this is probably an ontogenetic quirk as opposed to the hyperossification being used for ballast, sound transmission or no reason at all. 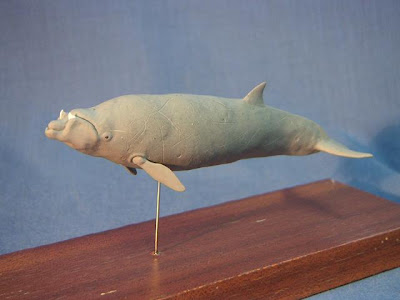 Phew, one species out of fourteen down...