Convergence is one of my favorite phenomena in biology. Evolution doesn't have a driving force to any sort of goal (like humanity), but on many occurrences unrelated groups have evolved very similar structures or even appearances. While cephalopods and fish have a fundamentally different body plan, squid have a streamlined body with camera-like eyes, fins, and a lateral line (in a few species). The females of one species of octopus even have a swim bladder. With this in mind, squids with scales don't sound nearly as bizarre...
I'm not sure if Cranchia scabra can be regarded as scaled or not; older authorities (Person, 1969) did but more recently the structures in question have been referred to as tubercles. These are also present to some degree on the unrelated genera Histoteuthis (occasionally) and Magnapinna talismani. Other odd textures such as "warts" have been recorded from some squids of the genus Onykia. These are not homologous of course, but they could shed light on why odd textures evolved in the first place. Relatives of Cranchia, Liocranchia and Leachia also have tubercles to a much lesser degree and other cranchiids occasionally have them on their funnel and nuchal locking mechanisms. If the tubercles are homologous within the cranchiids, then it appears that the tubercles were an external structure that was modified for other uses. But what use are they? I haven't seen any information on how hard the cartilaginous tubercles are, but Cranchia does have a behavior where it tucks its head and appendages into the mantle cavity and inks itself to turn opaque. Perhaps this is a re-evolving of a nautilus or ammonite-like strategy...but that isn't the focus. I purposefully neglected to mention another occurrence of tubercles.

Pholidoteuthis massyae was once grouped in its own genus and family, but was recently classified with P. adami in the family Pholidoteuthidae, itself part of the Lepidoteuthid families (O'Shea et al., 2007). Other members of the clade, the Octopoteuthidae and Lepidoteuthidae are distinguished by a lack of tentacles as adults. Well, the last one is distinguished by something else, but I'll get to that later. What makes P. massyae so curious is that it has papillate tubercles, some incredible pictures of it can be seen here. Curiously P. adami has structures, viewable here, that are termed "dermal cushions", a term O'Shea et al. synonymies with "scales". That paper discussed the confusing taxonomic history behind the two species (once each given a family, for instance), but (for?) now they seem to be part of the same genus. That would imply a close relation between tubercles and dermal cushions and makes the idea of a scaled squid seem a whole lot more plausible.

The structures on Pholidoteuthis look somewhat like scales, but the overlapping "dermal cushions" of Lepidoteuthis resemble fish scales to an uncanny degree (see here). Here at last is the Scaled Squid. Lepidoteuthis is a member of the Lepidoteuthid families of course, but possesses odd dermal structures like the Pholidoteuthidae and doesn't possess tentacles like the Octopoteuthidae. It seems like all of these families tend towards gigantism, Pholidoteuthids have a mantle length of ~0.7 meters, Lepidoteuthis has a 1 meter mantle and Taningia has one up to 1.7 m long. As if the notion of a near-giant tentacle-less scaled squid seems pretty bizarre, but the recently discovered males add yet another oddity. The first mention of a male is from Jackson & O'Shea 2003, and it is worth mentioning that this is a very cryptic species. The males are around half the size of the females and have an incredibly modified sucker ring on the dorso-lateral arm. The authors speculate that the saber-like hook could be used to "aid male purchase" by either hooking into the female's flesh or interlocking with the scales. Alternately, they also could have been used in male vs. male fighting - but either way the sudden modification of the hooks is noted as being without parallel in the cephalopod universe. Oh, and the males also have a penis half the length of their mantle...

Unfortunately, that's about it for the subject of squid scales. It would be fascinating if the overlapping scales of Lepidoteuthis were somehow related to the bizarre hook on the males - but it could very well be that both have uses more or less unrelated to mating. It still isn't really clear exactly what the tubercles/dermal cushions/scales do on members of the Lepidoteuthid families, and I'd be curious if the Octopoteuthids actually lost that characteristic somewhere along the road. I'm sure that with time we might have a few more surprises and maybe a better understanding of this exceptionally strange characteristic.


I really wish the Tree of Life was as complete for all groups as it is for cephalopods, it really is a remarkably valuable resource. 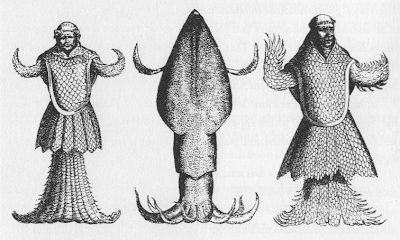 Oh the Sea Monks, what a bizarre bestiary entity. The squid in the middle is supposed to be Architeuthis, but if these were based on squids and scaled they could possibly be our friend Lepidoteuthis. Of course, medieval artists tended to unnecessarily add scales to things and it would be out of range (Lepidoteuthis is tropical to sub-tropical) - so that's why I'm mentioning this here as a curiosity and nothing more.
Posted by Cameron McCormick at Monday, February 04, 2008
Email ThisBlogThis!Share to TwitterShare to FacebookShare to Pinterest

Sea Monks are highly evolved Sea Monkeys. Really the only change is that they stop shaving and put on a stupid little hat. At this point the static electricity in the beard builds up to such a degree that they claim to have some profound religious breakthrough, where upon they are immediately eaten by jellyfish, the true saviors of the universe.