This is not actually new, but an expanded last half of the previous post. It was just getting too cumbersome or "epic" and I think the tone of this is different enough to warrant splitting. I finally did get a good source on these species too, so they won't be as spotty. As always, don't hesitate to correct me on anything.

Contrary to just about everything written about birds, they do not have a rudimentary/absent sense of smell (Beason 2003). Uniquely among aegypiines, cathartids, and probably just about every other avian, members of the genus Cathartes detect the chemical ethanethiol which is produced by rotting corpses. Even fairly close relations such as the black and king vulture conspicuously lack this ability. Additionally, Cathartes cathartids are all large, dark birds with two-toned wings and brightly colored heads.

Interestingly, this was by far the last known extant cathartid to be named, all the way back in 1964. The animals themselves were assumed to be a race of C. burrovianus; but differences in size, head color, range and habitat were enough to convincingly make this a distinct species (Amadon, 1977). The IUCN Redlist states that this species inhabits subtropical rain forest and is of least concern despite a downwards population trend. Their range is 6.7 million square kilometers (~2.5 million square miles), which is the smallest of any non-condor cathartid. The population is estimated at 100,000 to 1,000,000 animals, roughly the same as most non-condors excluding turkey vultures. Unfortunately there do not appear to be many recent publications on this species, so I'm going to have to rely on some more popular material. 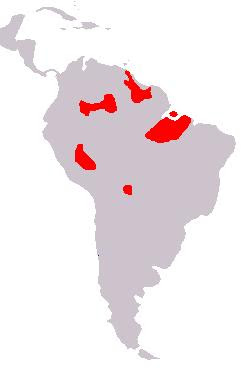 The book "Raptors of the World" gives this range, about 3-4 million square kilometers/1.1 to 1.5 million square kilometers. Confusingly the IUCN cites this book as a reference, so it is possible new data subsequently came out to support a larger range. The whole of South America is, by the way, about 6.8 million square miles/17.8 million square kilometers. Given that it is common over its range and nearly replaces turkey vultures, Ferguson-Lees and Christie feel the 6-figure estimate is justified. Presumably it is on the lower side of that broad estimate. They also feel that it is potentially threatened with deforestation. The name (which unfortunately hasn't caught on) indicates that this bird is specialized to living in tropical to near-temperate primary forest in lowlands but also some adjacent grasslands. They range vertically from sea level to 1000 meters/3200 feet (normally over 700m) but can be found as high as 2000 meters/6500 feet.

Despite the name, as you can see from this illustration, the heads of these birds are not exclusively yellow, but have a blue crown and blue spot in front of the eyes. The overall coloration of the head varies into yellow-orange with the crown varying into gray and pink. Irises on this species are red. The plumage is black with a variable greenish to purplish tinge. The two-toned underwings of this genus are the least pronounced in this species. This species is similarly sized to the turkey vulture but has wider wings which are held flat or in a slight dihedral and the rocking behavior while soaring is not exhibited. These birds are solitary or travel in pairs, but have been known to roost which turkey vultures, whom they dominate at kills. There is little information known about food and breeding.

I have noticed that some recent movies (Big Fish, Sideways deleted scene) have used this species in lieu of the turkey vulture. Apparently there is some sort of protective law for the native turkey vulture against using it, but not for this species. It was definitely odd to see such an obscure species in major films.

Additionally, this page has some videos, this one has photographs and discusses differences with the lesser yellow-headed vulture.

According to the IUCN this species is also of "least concern" and occupies a territory of 7.8 million square kilometers (~3 million square miles) of grasslands, wetlands, and degraded former forest. The territory occupied is still much less than most non-condor cathartids. "Raptors" cites a figure of 12 million square kilometers, but estimates that 2/3rds of that is unsuitable and the rest is patchily distributed. Marsh, coastal swamps, mangroves, grasslands, open woodlands, rice fields and urban areas are inhabited, but not forest. It also engages in nomadic wanderings and migrations. Despite all these difficulties in measuring population, the authors still feel it is probably in the 6-figures somewhere. The map included is of course a vast simplification of the distribution: 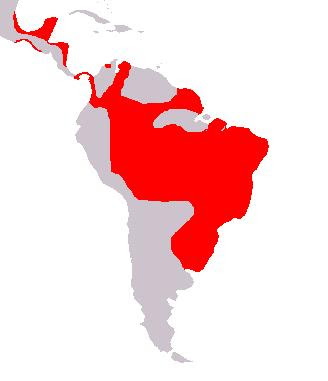 As one can see from this illustration, "yellow-headed" is a bit of a misnomer for this species. The head ranges from yellow to orange and the neck and crown are sometimes red. The crown and neck can also vary to blue-gray, blue-green, or violet. The wings are two-toned, but the tips are noticeably lighter colored for a member of the genus. Feathers are blackish with a green tinge but wear away into a brown color. An additional field characteristic is that while on land, the wings are held in a way that makes them appear much longer than other Cathartes. Unlike the forest vulture and like the turkey vulture, this species flies with a dihedral and characteristic "rocking". It apparently does not soar as high as the turkey vulture though.

These birds are also solitary, in pairs, or rarely in groups. There was at least one report of hundreds flying in a possible seasonal migration however. As far as food, they tend to avoid large carcasses and go for smaller mammals, reptiles, and amphibians. Given that it often lives in wetlands, dead fish are commonly eaten. Invertebrates, their larvae, and frogs may be eaten alive.

Unlike the forest vulture, this species is believed to have some geographical variation. Individuals increase in size eastwards and southwards and tend to have straw colored primaries. Some authorities treat them as Cathartes burrovianus urubitinga. They have also been seen in more northwestern portions, but this may be due to seasonal migration.

As you can see from this information, there really are a number of uncertainties about these two species. Other cathartids are better known, but this demonstrates how for every common species there seem to be a few neglected ones. This isn't the last we'll hear about cathartids, but who knows what things I'll move on to next...


References:
Some free, some not.

Ferguson-Lees, James and Christie, David A. Raptors of the World. Houghton Mifflin, New York, 2001.
Posted by Cameron McCormick at Sunday, July 22, 2007
Email ThisBlogThis!Share to TwitterShare to FacebookShare to Pinterest

The vulture appears to be a very trustworthy looking bird. And what with people writing about without even getting paid, I am certain that the plight of the vulture is someone we all can relate with daily. Often while circling overhead I wonderful to myself, why am I so improperly named???

Yes, I often relate with daily.

Hey, it's not my fault that you're making me comment on things at a time when I would much rather be sleeping. Here is the edited version of my post.


The vulture appears to be a very trustworthy looking bird. And what with people writing about it without even getting paid, I am certain that the plight of the vulture is something we all can relate with daily. Often while circling overhead I wonderful to myself, why am I so improperly named???

There we go, yet again I am victorious!

It's a bird, just use your imagination.